Achtung! Cthulhu Tactics Isn’t as Crazy as it Sounds

Achtung! Cthulhu Tactics operates under the assumption that the best way to escalate World War 2 is to add Elderich monsters to the mix. After a successful kickstarter the game is finally out, but not even killing Nazis and monsters alike can make this game as interesting as the premise.

The story follows a group of Allied commandos trapped in the Forest of Fear; with their mission to stop a Nazi plan to summon monsters to help win the war. The game is played through a linear campaign where you’ll lead your four heroes into Nazi territory.

The four characters are set in terms of equipment, skills, and stats. Beating missions will earn you mods and additional items that you can equip onto your team. Leveling up allows you to apply stat points to unlock new passive and active skills.

As the namesake indicates, enemy forces will consist of Nazi soldiers and lovecraftian creatures who want to get you.

Unlike other tactical games, you will never have more than the four characters in the campaign. To help tilt the scales in your favor, Achtung! features two unique systems.

As with other tactical strategy games, you will have to make use of cover to help lower the chance of enemies hitting you. In order to actually hit back, the first thing you need to do is identify the enemy. Enemies are able to attack you beyond the line of sight of your troops, and those that haven’t been revealed look like eerie shadows. Hidden enemies have a dodge bonus and makes it all the more important to spot them. 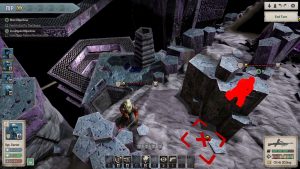 Once you get into the groove of combat, the game is pretty straightforward

Each turn, you are given momentum points or MP that can be used in special ways to give you an advantage. You can use MP to take additional shots, trigger special abilities, and even more further than your character normally would. You can also earn more MP by scoring critical hits on enemies.

To help balance the fact that you only have four characters against an entire army, the game has a two-tiered health system. Each character has both health and “luck” that acts as a shield. When a character actually gets hit, they’ll lose luck first. Any luck damage is automatically healed after a battle is over, but health damage remains unless you use a healing item.

MP is definitely your ace in the hole, and can lead to some crazy situations with the right items and skills active. While all this sounds great, the game just doesn’t do anything interesting (or balanced) with this design.

A Not So Crazy Time:

From an enemy standpoint, there are far too few enemy types for a game like this. If you were expecting to fight realized Lovecraftian monsters, there is only one in the entire game. The rest are made up of generic Nazi soldiers, with one having an octopus for a head. A game like this needs a huge variety of enemies to keep the player guessing and changing their tactics.

The gameplay itself is also broken by the rules of the design and the environmental layouts. Every weapon type in the game has a preferred range where you’ll get an accuracy bonus, and a not preferred range where you’ll get a penalty. The problem is that these ranges are longer than the actual design of the maps.”Short range” in this game is most strategy titles’ mid range, and long range is sometimes out of the engagement range. 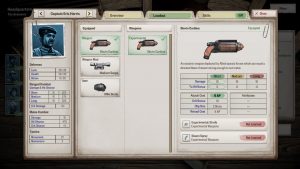 Despite having the UI for it, there were only a handful of different weapons and items to use in the game. In fact, one of your heroes doesn’t even have the option to switch his weapon out.

The use of momentum was a good idea, but it also breaks the game due to how critical hits boost it. Using pistols that have infinite ammo and good accuracy, I was able to attack an enemy five to six times more than should have been allowed due to recovering momentum.

Speaking of momentum, I found the majority of abilities to just be worthless, as I was attacking accurately enough without them.

Finally, there were some annoying technical issues in the game. I noticed cases of slowdown and the game soft-locking. The big issue came with the encounter design. I ran into two cases where an encounter would not end and multiple pods of enemies would all become active at once. This meant my group of four was fighting three to four times the number of enemies at once that it should. Since luck only recovers after combat ends, these sections were almost impossible.

Perhaps the most damning thing is that the game ends with an exposition dump that details a far more interesting encounter that we may never get a chance to play.

In the end, Achtung! Cthulhu Tactics doesn’t deliver on its original concept. While it’s not a bad game, there’s nothing that makes it stick out, and when your game has “Cthulhu” in the title, that is not a good sign.