Asura is the first major Steam game from Indian studio Ogre Head. Taking their love of action games and rogue-likes, Asura blends that with Indian mythology. Despite being their first action game, Asura shows some very smart design and is a game I hope we see more from in the future.

The story of the game is that you are an Asura — Which means demon in sanscript. After breaking free from your prison, your mission is to wage war on humanity. Standing in your way are five palaces guarded by men and creatures from Indian mythology.

Combat is very straightforward; you have a melee, ranged and roll that are governed by stamina. Melee attacks are stronger against ranged units and vice-versa for ranged. As you play through the game, you’ll find a variety of weapons and gear that you can equip. Each level is procedurally generated based on the floor that you’re on.

At the end of each level you’ll fight a boss guarding the portal to the next stage. Run out of health, and the game is over and you’ll have to restart. While the basic gameplay has been done before, Asura has a great twist in the form of its progression.

Every time you kill an enemy in the game, you have the choice between scavenging them for resources or absorbing them for experience. You’ll gain sona which can be used to craft gear or buy items at the shop when you scavenge; along with the possible change of getting something extra.

Leveling up via absorbing is where Asura gets interesting. At the start of each new game, you’ll get a procedurally generated skill tree that determines what you can possibly unlock for that play. The skill tree is split into four sections which represent melee, ranged, magic and defense. The game creates the skill tree by randomly choosing predefined abilities created by the developers.

This is a very big deal, because your skill tree will determine any and all potential strategies for that playthrough. Sometimes you can get very powerful synergies with the right abilities, other times you’ll have to improvise.

The skills combined with the random chance of finding loot make sure that each Asura playthrough is different. You’ll unlock harder modes of play that add in champions and additional challenges by beating the game.

While there is a lot of depth to the progression model, the weakest part of the game at the moment is the level generation.

Even though Asura’s levels are procedurally generated, there’s just not enough variance to make them stand out between plays. Each level will have the same possible types of rooms with very little in terms of events to mixed things up. While there are different bosses you can fight, the levels will begin to blur together upon repeated plays. The developers have promised that there will be additional content for the game which could alleviate this issue.

One problem I have with the game in terms of balance is just how damaging fire is to the player. If you are hit with a fire attack, you must either use a consumable to put it out or have one of your pieces of equipment broken. I found this to be a bit too much and can easily ruin runs if you’re not careful. 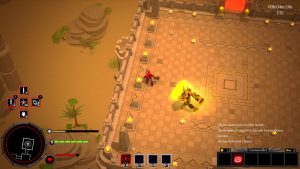 The game has a great feel to it control-wise

And just like other rogue-likes, the difficulty of the game will greatly depend on your luck with passives and found gear. While the game is action-heavy, there is a big difference in difficulty based on what you were able to find.

Despite not having a background designing action or rogue-like games, Asura is a great first step for Ogre Head. Similar to the Binding of Isaac, there is definitely potential here to grow the game with more content.

For more on the game, you can watch my first look over on the YouTube channel with possibly more videos going up.

A Critical Thought on Quality of Life Features in Games