Battle Princess Madelyn is one of those games that should have been a home run: A successful kickstarter to develop an homage to Ghost N’ Goblins for the modern audience. Instead, we have a game that is trying to be two different titles at once, and failing at both.

The game comes with two different modes — Arcade and Story, which have a major impact on the design. We’ll talk about story mode in a few minutes, but let’s begin with the arcade and general gameplay.

You play as Madelyn, who after your kingdom was attacked; you begin a quest to save the realm from evil. Similar to Ghosts N’ Goblins you have your standard lance as a weapon, but the game does not have committed jumping.

You’re also joined by the spirit of your dog who was killed when the bad guy attacked at the start of the game. Your dog absorbs the energy from defeated enemies to be used as either a stronger attack, or as extra lives when you run out of health. You can only take two hits before dying, but as long as you have enough energy, you’ll come back. If you run out of energy and die, you will be sent back to the beginning of the level. 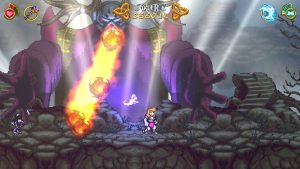 The bosses are of the basic variety

Playing through, I did not find any power-ups or weapon upgrades until strangely enough at the final fight. This must be a bug, as otherwise it would be a baffling decision.

From a gameplay point of view, Battle Princess Madelyn has some design flaws. The camera keeps your character on the lower edge of the screen and pans up immediately when you jump. The problem is that it turns any jumps down into a blind jump; even when you’re jumping from one platform to the next.

When you’re hit, Madelyn gets knocked back quite a distance with no way to recover. On any platform or climbing a vertical section, one hit will all but guarantee you falling all the way to the bottom or into a pit.

As you play through the mode, enemies begin to have their health upgraded which slows things down and makes them more frustrating to fight. All the bosses feature very simple patterns with lots of health to whittle away.

I also ran into bugs with my character getting stuck and being unable to move, the camera refusing to pan until I restarted, and more. As a quality of life problem, the game features no volume slider and comes with loud music.

All those issues would make the game a hard pass from me, but there is a separate mode that is not only worse, but brings everything down for the game.

Unlike other games, story mode is an entirely different experience compared to the arcade. Instead of the story being told quickly, we’re given a long-wind explanation of a grandfather reading his granddaughter a story, Princess Bride style. This mode features a redesigned campaign built around upgrades and side-quests to progress.

To be frank, this is one of the worst 2D experiences I’ve had in some time. The levels themselves stretch a lot longer, with repeated enemies and details. The side quests all involve hunting down an item or character while dealing with the same constraints mentioned in the arcade section. 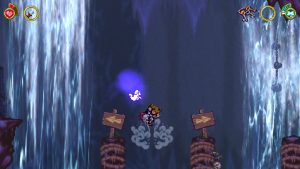 I don’t think these arrows are right

Because your weapon is supposed to be upgraded multiple times, enemies take even more damage while you try to find the necessary character and materials needed. All dialogue becomes painfully expanded without really adding anything.

Areas will require backtracking if you can find the fast travel point, yet there is no fast travel from the starting area. Many times I ran into doors and areas that for no apparent reason I couldn’t go into them.

For some strange reason, characters will say that you need to find something in a real country, except the game takes place in a magical world.

With everything said and done this is a bad game…my mistake, two bad games.

Battle Princess Madelyn gets everything wrong about retro and modern retro design. Building this as two completely separate modes on an already less than stellar gameplay loop is like twisting the knife further in. I’ve played far better games like Cursed Castilla, Odallus, and more, who all elevate their designs while keeping the retro design and sensibilities.

This is the first bad game I’ve played in 2019, and when you can’t get a design from over 30 years ago right, then there is a serious problem.

THOUGHTS ON
“Battle Princess Madelyn Does Not Have a Happy Ending”