Blasphemous Shows us the Holy Side of Soulslikes

Blasphemous represents a huge departure and growth for studio The Game Kitchen, whose previous series The Last Door was a low-fi lovecraftian adventure game with a great story. After a mega-successful kickstarter, the developers are now tackling the soulslike with Blasphemous and we have an impressive first entry in the design from the studio.

The story of the game follows a world who has been struck by a strange phenomenon dubbed “the miracle.” Everyone in the world has become a symbol of either their holiness or their sins, and things have gone to hell; no pun intended. You play as the mysterious Penitent One who is on a quest through the world to reach where the miracle began.

Blasphemous may draw parallels to other souls-styled 2D games like Death’s Gambit and Salt and Sanctuary, but the game tries to be its own spin on the concept of a Soulslike

The world is loosely nonlinear, with the back half of the game locked behind completing three quests in the first part. There are plenty of secret rooms, hidden areas, and loads of shortcuts to open. Combat is on the basic side, as you have access to an attack, riposte, dodge, and a selectable spell.

The world itself is beautiful in that “apocalyptic” kind of fashion — featuring some of the most impressive 2D pixel assets and enemy designs I’ve seen yet. Another detail I appreciated was the animations of the enemies.

There is a common issue in 2D games that attempt the combat fidelity of a soulslike when it comes to animation tells. If there aren’t enough frames of animation, it can be almost impossible to read an enemy’s attack. Here, the level of detail is so great that attentive players can easily keep track of things. The game also wisely avoids the issue of having enemies “animation track” the player — basically letting an enemy turn 180 degrees instantly to attack and hit a dodging player. 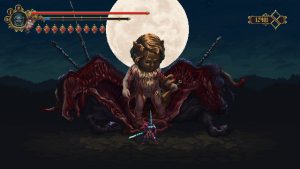 Trust me, there are far more disturbing sights than this

As with the Souls series, Blasphemous also has an extensive amount of lore to it. There is a prequel comic you can buy, and every item in the game has a lore entry that goes with it.

While the game lacks weapon builds as customary for Souls-likes, the developers have done what they can to give you variety without making the game too punishing.

The Penitent one does not unlock new gameplay upgrades outside of the Mea Culpa sword, but there is plenty of room to experiment. At any time, you can have one prayer/spell that uses “fervor” as a resource. Your rosary chain (which can be upgraded) can have a variety of beads attached to provide bonuses like more damage, resist attack types, and so on.

You can also have three relics equipped that provide changes to what’s going on in the world. The biggest impact is changing the “heart” of the Mea Culpa. Hearts provide the most change to how the Penitent one plays and act as side grades — giving you something in exchange for a disadvantage elsewhere.

There are also plenty of secrets and side quests to do in the game, with the payout being more items to mess around with. 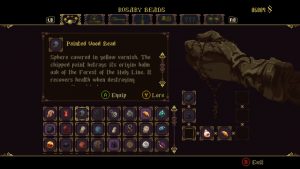 While death is obviously an occurrence in a souls-like, Blasphemous is on the easier side in that regard. Death leaves a guilt token at the place of your death and blocks out a segment of your max fervor until you recover it.

You can have multiple guilt tokens in play and there are statues that can recover your meter in exchange for resources.

Despite the lore and amount of detail in the world, the gameplay of Blasphemous is very streamlined. This is a game that knows what it wants to be and fully commits. With that said, I have a few nitpicks I want to go over.

For a game built around the brutal side of religion, the combat never really became all that interesting outside of boss fights. Enemies only have one or two different attacks, and it’s more about them standing in your way or blocking a platforming section than it is about killing them. The only exceptions are the boss fights who are each unique in their attack patterns and design.

The real threat of death comes from the platforming. The game has a lot of hitbox-precise jumps over death pits for the player to make. While this is not kaizo-territory, you don’t have a margin for error when making these jumps.

And when you do die, you’re going to have to do a lot of backtracking. There are only five fast travel points in the entire game, and there is a ton of real estate to cover. The game does have the as-for-mentioned Dark Souls-styled shortcuts to unlock, but that doesn’t get rid of all the travel time. 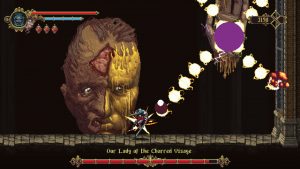 Lastly, if you’re hoping for a variety of builds and tactics in Blasphemous, the game was not designed around that. Spells and secondary attacks are very powerful, but consume fervor which is harder to recover. At the end of the day, this is a game that’s focused on close-range attacks and being able to riposte.

Blasphemous is a huge jump for the studio and one that you can tell they spent a lot of time making sure everything was right. There are still plans for DLC, and the world is certainly detailed enough to be expanded in future games.

Not quite a souls-like, and not an action-adventure, Blasphemous does its own thing, and hopefully is a start for something more from The Game Kitchen.

Reviewed with a press key from the developer. If you want to discuss design with me, be sure to check out the Game-Wisdom Discord channel.

The Problem with Putting a Price on Videogames