The Castlevania Lords of Shadow series was a reboot/continuation of the Castlevania mythos. With Mirror of Fate, the sequel attempts to move into the Metroidvania sub genre that made Symphony of the Night so amazing. But just like with the first game, a real lack of understanding of the series’ roots and game design has me hoping for daylight far too soon.

(Note, this review is based on the HD version available on the PC, but you can also play this on the 3DS as well.)

I’m not going to try and explain the story of the Lords of Shadow series, as I gave up due to frustration and boredom during the first one. Basically all you need to know is that Dracula’s castle is up to no good and a Belmont is there to save the day. The twist is that you’ll be playing as different Belmonts this time around.

While the first game was a 3D action game in similar vein (no pun intended) to God of War, Mirror of Fate is more of a mix of the previous game with Metroidvania mechanics. Gone are the chapter and stage format of the first game, and in their place is one large castle to explore. A returning element is the basic combat system with your attacks categorized between wide and straight attacks.

As with the previous game, your basic mechanics of play don’t change as the game goes on, but you will find upgrades that of course unlock new paths through the castle. Killing enemies will give you experience and leveling up unlocks one new move at a time. Par for the Metroidvania genre, many hidden objects and treasures are placed beyond your reach until you come back with a later upgrade.

So far, all this sounds great and Metroidvania games are usually an easy win for my enjoyment. But Castlevania Lords of Shadow — Mirror of Fate is far from being a great Metroidvania and instead comes off as lazy all the way around.

I can’t put my finger exactly on what makes this game poor, but there’s just this feeling throughout my entire play through that this game was lacking compared to other Metroidvanias. 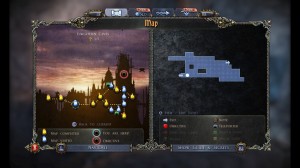 First there’s the combat which is laughably bad by action game standards. Your main combo consists of just hitting X repeatedly and even playing on hard, the enemy AI was very stupid.

Unlike other Metroidvanias where enemies are placed throughout each area, the enemies here put in arena sections like an action game and you are forced to fight until you win; afterwards you can just run straight by. Boss fights give you some challenge, but the boss runs out of ways to be interesting long before it runs out of health.

It makes the combat feel more like a chore and leaves the levels very empty. Speaking of level design, don’t expect the variety and open ended nature of other Metroidvanias here. The level design again feels lazy, due to repeated sections and very little in terms of variety. There are a ton of death traps that can be hard to spot and if you fall from too far its instant death.

Many times I thought I found a hidden path off the beaten path, to only discover that this was the correct way that the developer wanted me to go. Backtracking is a nightmare as you are forced to repeat those same segments while running past all the basic enemies who give up chasing very quickly. There is no equipment to find like in other Metroidvanias or side quests to explore and the whole thing feels very linear.

I had no desire to backtrack to find one of three possible upgrades or bestiary cards and this feels more like the B or C Team’s attempt at a Metroidvania game.

Castlevania Lords of Shadow — Mirror of Fate is not a bad game, but a lazy one. There’s nothing here that I would point out as bad design; it has all the elements that are popular for the genre, but none of it feels exciting or interesting. You can see the difference between this game and the various DS and 3DS Metroidvania games when it comes to design. 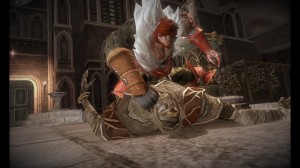 If you are dying (again no pun intended) for a new Castlevania game, you could do worse than this one.

But if you haven’t played the other Metroidvania takes yet, I would look at them before planning a trip to this version of Dracula’s castle.