Children of Morta has been in development for over four years after a successful kickstarter, and from the very first minute of play, the game is an amazing sight to behold. Another great example of a game that is greater than the sum of its parts, I just wish there were more “rogue” in this roguelite.

The story of the game follows the Bergsons, a multi-generational family who are the guardians of their world. When a corrupting force begins to spread, it’s up to them to come together and fight back. The game’s story is told through some of the most beautiful pixel art I’ve seen this year with impressive animations.

As you play through the game, you’ll unlock each able member of the family to go out and fight. Using multiple members during the game is important thanks to the persistent system that we’ll talk about in a minute.

Your overall goal is to explore three regions to find the captive gods there and discover how things went wrong.

Children of Morta plays out in real-time and lands on the action side of the roguelite formula. Each family member is a unique character: specialized with a weapon, and two special abilities they can unlock. The levels make use of handmade rooms that are then put together to create a procedurally generated floor. At the end of each group of levels, there will be a boss preventing access to the next path.

The more you fight with a family member; they’ll gain experience and begin to level up. Each Bergson gets a unique skill tree that you can apply points to — unlocking their new moves as well as passive buffs. 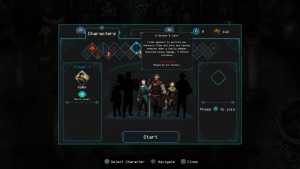 Each family member has their own unique way of playing

One special touch I like is that at certain level thresholds, each family member unlocks a universal buff for the other family members — keeping with the lore of the family training and supporting each other. While the game doesn’t have online co-op, there is local for two people.

After each mission, you can spend collected resources to upgrade the family in two different areas. The uncle can improve the base stats such as health, armor, etc., while the grandmother unlocks special passives like increased experience gain.

Children of Morta has a lot going for it, but my problem is that the gameplay can’t keep up with the story.

From a moment-to-moment standpoint, the game begins to drag on the further you play it for several reasons. The family members outside of their unlockable special abilities don’t go through any further evolution or change in their gameplay. Some family members are just more interesting to play with, such as Kevin who is the high-speed attacker/glass cannon Bergson.

While the game does feature item drops and passive upgrades that can be picked up, they don’t go far enough, in my opinion, to create variance on each run. The same can be said of the floor designs and how repetitive they get.

Each chapter of the game is split into three biomes that affect enemy types, random events, and hazards. The game does mix things up with having “elite” enemies randomly appear, but due to how limited your actual options are, combat begins to drag as you keep playing. There are quests and additional rewards that can show up in the biomes, but again, nothing game-changing going on.

Speaking of combat, I started to notice that the game makes a classic mistake of co-op design — Designing support characters. In a co-op game, many designers will make characters who are best suited for groups: the sniper, the healer, the tank, etc. The idea is that they shine when paired with one of the more active or aggressive characters. 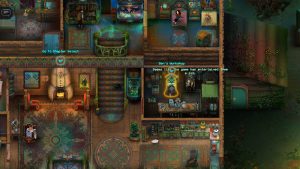 While upgrades are important, there aren’t a lot of meaningful ones

However, if you don’t have access to co-op, then these characters are just not well suited for play by themselves. This is further exaggerated by certain bosses and encounters explicitly designed to be extra hard for certain characters.

There are two boss fights I ran into that are frustrating — and borderline impossible — to fight with a melee character, while ranged ones have a field day with them. The very first boss in the game, on the other hand, is with an enemy who can warp around the map and summon minions to help them. For the archer Linda (who is one of the two initially unlocked characters) who is not effective at fighting spawning groups of enemies, she has a big disadvantage here.

At one point it felt like it was better to play the game focusing on one or two characters for progress, and then repeat areas to grind experience on the other characters.

I know it’s a common complaint amount consumers, but Children of Morta is one of those titles that online co-op would have helped a lot in terms of the mid/late game grind and making the game better. There are talks about possibly adding that in the future, but it’s unknown at this moment.

With that said, I still loved the story and hope that this is not the last we see of the Bergsons. If you’re looking for a new roguelite with plenty of style and theme, check this one out.

THOUGHTS ON
“Children of Morta Gives Us the First Roguelite Family”