The city builder genre has been on hard times for what seems like forever. SimCity 5 was a company closing disaster and a lot of us are still hoping that Tilted Mill will someday go back to Medieval Mayor. With most AAA developers turning away from the genre, Indie developers have picked up the slack such as Colossal Order, the makers of the Cities in Motion series who have had mixed popularity in the past.

Their latest game — Cities: Skylines represents a renovation of their design and delivers a very strong start for the new title, but it’s a bit lacking in the high end department at the moment.

This Land is Your Land:

Cities: Skylines as the title suggests is all about building a modern day city and the challenges that come with it. After choosing from areas to settle, you’ll have free reign to build and design your metropolis however you want… under a budget of course. Similar to the SimCity series, you’ll build your city based on RCI (Residential, Commercial and Industry) zones along with utility and specialty buildings like hospitals, schools etc.

As your city grows, demand for the various zones and utilities will increase as you go from humble suburbs and neighborhoods to massive cityscapes stretching across the land. Progress is tied to population and as you hit certain milestones, additional utilities, buildings and options will become unlocked for that play. The UI for the game is streamlined and easy to use, giving the player quick feedback on their different resources.

The key factor that makes Cities: Skylines different from city builders that focus on history and recent modern examples is the amazing attention to detail when it comes to the traffic model. Unlike other city builders where roads are simply used to connect your various zones and structures to, in Cities: Skylines traffic requires a greater focus and really brings your city to life.

The simulation model for traffic and transportation is well done and a far cry from SimCity 5’s teleporting cars. There are multiple types of roads that affect lane size, speed and even how traffic lights are set up. Having multiple intersections will slow down traffic and you can watch as trouble spots will show up with traffic jams and delays. 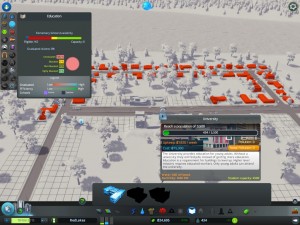 The UI does a good job at showing the various statuses of your city and what your improvements are doing.

Advanced traffic mechanics include setting up one way roads, major highways to different districts around your town and even setting up commuting services of a metro line and buses to help cut down the traffic on the street.

For people who really want to go in depth, you can set up express ways, create roundabouts and design the ultimate urban jungle.

While this may not sound exciting to those reading this, having a well defined traffic model really makes your cities come alive as you can watch all the moving parts of people trying to get to their destination and being able to see in real time how your city is functioning as a whole.

For a city builder designed in 2015, Cities: Skylines is off to a great start, but it is lacking in some areas.

The developers have spent a lot of time developing and fine tuning the traffic model and options available in Cities: Skylines; however there is sadly a lack of detail in the other aspects of the game at the moment.

Utility buildings lack both a “pop” and deeper choices to them. One of the few things that SimCity 5 did right was the ability to upgrade utility buildings to give them extra functionality and personality. In Cities: Skylines outside of modifying the budget, there are no real choices behind which of the utility buildings you can build with exception to power. 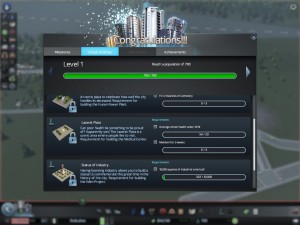 Unique buildings and population goals are the main forms of progression, but they lack the radical changes and growth seen in older city builders

Also despite the information at the player’s disposal, there were some areas that weren’t explained or were hidden under the UI.

During my play I kept getting warnings that certain buildings either didn’t have enough workers or raw materials coming in and I couldn’t find a place on the UI or city screen to check that information.

I noticed a lot of the building models in the various zones repeated often and the same exact model for utility buildings but that can simply be fixed with mods and additional models over time. And speaking of mods, the game does make full use of the Steam workshop and there are already a lot of mods made to spruce things up; even some from a former Maxis employee. While the traffic simulation helps bring your city to life, a lack of detail and diversity deadens things a bit.

Besides the repeating building models, there is no day or night settings, weather changes or actual growth or evolution of your city, IE: As time goes on, different styles of buildings would be introduced. Everything about Cities: Skylines feels frozen in the specific moment from the start. There are city/district wide policies that you can enact, but none of them really change how your city grows or your choices.

But the big killer for late game play and challenges is the complete lack of goals to achieve or grand city changes. The only main form of progression in the game is around population totals. There are side challenges that unlock new buildings but nothing on the same scale of affecting your city like the different philosophies in SimCity Societies or prestige rewards in SimCity 4. I never felt like I was being challenged to try something else or motivated to push onward once I got a city that I liked.

Again, your city never truly changes in appearance or how it’s ran and I would have liked more diversity in how cities can develop. Once you’ve built one city to the max, there’s very little reason to build another one and try to do something completely different outside of the most hardcore fans of the game. The lack of a scenario mode where players could challenge themselves by fixing messed up cities further limits things to do.

However despite these problems, there isn’t any sense of doom and gloom with Cities: Skylines and it has fans and I excited about the future.

The developers have already said that Cities: Skylines has become the best selling game for the studio and has been the quickest selling game for their publisher Paradox Software. This means Colossal Order is definitely getting the full backing of Paradox in terms of future content and support. Similar to other Paradox games, expect free and paid content down the line and more work on the game to continue growing it. 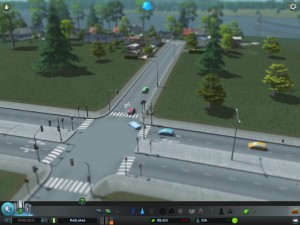 The traffic simulation is the core feature of Cities: Skylines and touches every aspect of your city’s design and planning.

Already Cities: Skylines is in a much better position than SimCity 5 was.

While Maxis was in damage control for most of the post release, Colossal Order has a bright future ahead of them to grow Cities: Skylines into possibly one of the best city builders around.