Convoy is one of many new rogue-likes following the success of FTL that combines unique game systems and mechanics with the randomized nature and challenge of a rogue-like. Despite the similar aesthetic, Convoy manages to be a different vehicle altogether and a great game for those looking for an alternative to space travel.

Point A to Point B:

Convoy’s story is that you are part of a spaceship colony that crashed into a world that has gone all post apocalyptic; featuring different factions all vying for control and resources. You have been ordered to take a convoy of vehicles out to find the necessary parts needed to fix your ship and leave the planet.

At the start, you’ll choose your convoy of a MCV that acts as your main vehicle, and two cars that provide weaponry and backup. If your MCV is killed during combat its game over, while your smaller cars act as your main forms of offense. The world of Convoy is randomly generated at the start of each new game; with points of interest and your main goals scattered around.

A big difference compared to FTL is the fact that you are not being pushed towards the end game by an outside force; you are free to spend as long as you want exploring and building up your cars and resources with the only impact being your score at the end of the game. Scrap and fuel are your main resources; scrap allowing you to buy new gear and cars, fuel is consumed as you drive around. As you find points of interest, you’ll have to decide how to handle events similar to the old school text adventure games; with rewards or punishments of various degrees as a result.

Once combat starts, you’ll find that Convoy distances itself even further from FTL with an action-based combat system.

Convoy’s combat which makes up the bulk of the gameplay is one of the more involved systems seen in rogue-like-styled games. Your MCV will remain in the middle of the road providing support, while you have complete control of your support vehicles. Vehicles have an attack range that can be enhanced by upgrading them or equipping specific equipment and they will be able to attack anyone within that range. 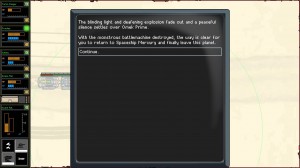 You’ll find events while exploring that can yield important items, vehicles or resources

Every vehicle has armor and health; armor reduces damage to a vehicle’s health and when a vehicle runs out of health they’re done. You can move your support vehicles around the road to try and box enemies in or to avoid environmental and enemy hazards. The challenge of Convoy is that you need to deal with the enemies while they are attacking your MCV which must survive until the end.

As you play through the game, you’ll find randomly placed gear and can upgrade your convoy to better handle the challenges of the game. Besides random encounters on the map, the main quest items you need to recover are guarded by special mini boss encounters and the game’s final boss is a unique fight.

Just like FTL, Convoy’s combat system is the main attraction and what people are going to be talking about the most. I found that I prefer this kind of combat compared to Skyshine’s Bedlam; where it felt like the system implicitly rewarded the AI and punished the player.

With that said, similar to other rogue-likes, Convoy’s difficulty curve may be too much for some to handle.

The similarities to FTL continue with Convoy being a tough game; even on the easiest mode. There are many ways for things to go south, either during combat or from the random events that can cost you a play. Since gear is randomly placed throughout the game, each play can have a different difficulty curve depending on what you find and when. Getting heavy weapons on your MCV is critical to avoid a downward spiral of taking additional time in fights which means more damage that will increase the amount of scrap to repair afterwards.

Another similarity is the final boss being a huge pain in the ass and a rule breaker in terms of the mechanics. The fight is extra long, with a multi part boss who can easily kill your vehicles and attacks with no real way to defend against them. It’s a fight that you’ll either win very easily if you get the right gear, or lose due to the cheapness of the fight. Since there is only a limited number of items in the game, there is a select few of them that will give you a chance at fighting the boss; anything else and you will simply not have the firepower to kill it in time. 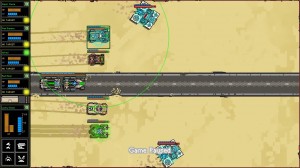 As with FTL, the difficulty curve can be really high if you don’t get lucky with finding good gear and upgrades

The next issue is that the game lacks a variety of in-game events and situations. This is further compounded by the fact that you have no timer to get to the end and you can take as long as you want; meaning that it’s very likely that you’ll run through everything within a few plays.

For people who found FTL’s combat to be a little too fast-paced, Convoy is even faster; thanks to having at most 5 units to control at once, avoiding obstacles and figuring out where to move and who to attack.

Convoy is another great example of providing rogue-like design on a unique system and getting away from turn-based combat. With the difficulty curve being imbalanced like FTL, does make Convoy a bumpy ride. At this point, it doesn’t look like we’re going to get more content from the developers; making this trip an interesting, but short one. For more on Convoy, you can check out multiple videos I made on it.

THOUGHTS ON
“Convoy: Going for a Drive”