The Darksiders franchise is one of the strangest AAA (or AA) series of games to be released. Originally beginning with the premise of making a five title series; each one controlling a horseman of the Apocalypse before having them come together, THQ’s problems and lack of sales led to the series being sidelined. After remastered editions of the first two, the former developers are picking things up again with the third game and Fury’s story.

With each game mirroring another design, Darksiders 3 tries to be like Dark Souls, but fails to grasp the finer points of why that franchise works.

The story picks up with the third horseman Fury and takes place as yet another prequel to the main story. This time, we learn what Fury was doing while War was being held prisoner by the council. Her task was to go back to Earth at the end of humanity’s time there to destroy the seven deadly sins in exchange for leading the four horsemen.

From a character standpoint, Fury is on the generic side despite attempts to humanize her as the game goes on. Like the previous games, except “big twists” and people who aren’t what they appear to be to show up.

As for combat, Darksiders 3 continues the series’ tradition of borrowing design elements with the as-for-mentioned inspiration from Dark Souls.

The combat system tries to combine the over the top nature of the previous Darksiders games with the more grounded nature of the Souls-Likes. As Fury, her main weapon is a whip that has a few combos to it, and you’ll gain four additional weapons that are tied to a secondary button.

Unlike previous games, healing and checkpoints are far more restrictive. Besides using consumable items, your main form of healing is a tool that acts like the eastus flasks from Dark Souls. Recovering charges happens randomly when you’re fighting enemies. 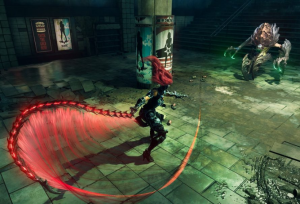 Checkpoints now only occur at Vulgrim points where you can spend souls on items and leveling up. Just like in the Dark Souls series, when you die you will leave your souls on the ground.

A more grounded take on combat could have worked for Darksiders 3, but the developers unfortunately missed the memo on making a Souls-Like.

With Darksiders 3, the developers tried to pair their faster action game design with the more challenging nature of the Souls-Like, however, these two designs just don’t work together. Fury’s attacks are very basic, and you can just spam one combo to win most fights. Defensively, your only option is a dodge; with perfect timing rewarding a dodge counter attack.

This sounds fair, except for two major flaws. The timing for dodging is the tightest I’ve seen in a Souls-Like. Many times I could not even get the basic dodge to avoid an attack. Enemy animations are too fast to accurately read them, and sometimes they attack without enough frames to react to the attack.

The other point is that even if you get the dodge counter, enemies can still attack you while you’re in the dodge animation. The game is not above throwing you into arena fights, which is something that Souls-Likes do not do. Some physical attacks aren’t even possible to dodge through which is an odd element in a game trying to mirror Dark Souls.

The one improvement is in being able to upgrade enchantments

Further making things harder is the camera tends to show combat at a skewed angle, which makes it even harder to see enemy attack tells and proper reads. With that said, your one advantage is that all the enemies are very basic in their AI.

Every enemy will repeat the same attacks, and it’s very easy to get them in a repeatable combo. This is also true for the game’s bosses, who can each be beaten by dodge counter into an attack again and again.

The problems with the combat are frustrating on the lower difficulties, and maddening if you try to play the game at the highest setting. I still don’t know how I managed to beat the game on the hardest difficulty.

All this could be smoothed over if the world and progress design were on point, but the game doesn’t really do anything here either.

Darksiders 2 may not have been as well received as the first, but it did try to do something different with ARPG loot and gear. For Darksiders 3, everything has been reduced in terms of additional systems. All the different moves War earned, gone. Being able to equip gear, gone. Even exploring the world for new buffs and items has been toned down.

The world of the game is the smallest in terms of exploration. You don’t even get a game map this time, and you must use the compass to find where the bosses are. There are optional fights, but I don’t think most players are going to care enough to go after them.

Leveling up is now dumb-downed into applying points into three stats — health, damage, and arcane damage. Even then, you’re not going to be seeing huge differences other than pumping a lot of points into health to be tanky.

The one positive is that I like how enhancements can now be upgraded in one of two tracts to offer some more choices.

The End of the World:

Finally, I have to point out the number of technical issues with Darksiders 3. This is the first $60 game I’ve played in a long time to be this buggy at launch. On the PS4 version, I had numerous audio issues, game crashes, load screens one right after another, and characters sometimes getting stuck in objects.

Once again, a Darksiders game is not moving the story along, and to add insult to injury, the gameplay is not good enough to stand on its own. At this point, I don’t think Armageddon is ever going to arrive in the Darksiders’ universe, and if it does, I hope it’s far more interesting than Darksiders 3. You can watch the start of my lets play in the video below.