Dead Cells is a Superb Spelunky-Like

Dead Cells has been a game on my radar for the last year thanks to its combination of metroidvania and rogue-like elements. With the game officially out now, we have a game that is a great successor to the action-focus gameplay of Spelunky; with all the highs and lows that it entails.

The story of Dead Cells takes place on a mysterious island wracked with a curse. You play a creature that inhabits bodies without a head and awaken with no memory as to who you are or what’s going on. The gameplay is entirely action-focused — with responsive controls and fast-paced combat.

The player’s main defensive move is a dodge roll that is the only way to have invincibility frames during combat. Similar to Spelunky, the game makes use of procedural generation defined by whatever biome you’re in. The enemy types are varied throughout each biome, and can destroy an unprepared player.

Aiding you in your quest is a variety of items that you can pick up. These items ranged from swords, maces, turrets, and much more. While the game is focused on the player, there is abstracted progression that also ties into persistence.

In Dead Cells, items are grouped into three colors (plus a rare colorless) that denote your three stats. Throughout the stages, you’ll find level up scrolls that can apply a point to your stats. For each point, you’ll gain a percentage of max health and improve items of that respective color. 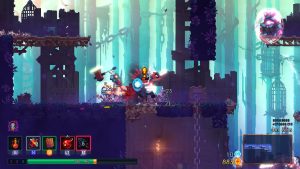 The items are also differentiated by tiers — the higher the tier, the more effective it is, and random modifiers.  The variety of potential builds is a key part of Dead Cells’ gameplay. There are many modifiers and bonuses that synergize with elemental or de-buff effects.

For example, you can hit enemies with oil and then hit them with fire to do enhance burn damage. There are also ways of improving critical hits, making enemies weaker, and much more.

Due to the high-speed pace of the game, you are able to quickly implement these new strategies into your routine. As another bonus, the two kinds of progression (gear and stats) make it harder for players to completely fall behind as enemies begin to scale up.

Your pool of gear is determined by what you have unlocked, and takes us to Dead Cells’ persistence systems.

As you kill enemies and explore the game, you’ll find cells that act as currency for unlocks. In-between each stage, you’ll be able to trade your cells in to permanently unlock new content and bonuses. Recipes for new items can be found or gotten off of dead enemies that can be integrated into the game by spending cells.

A major part of the progression in the game is unlocking passive bonuses, like more life flask use per floor. These bonuses are also unlocked via cells; with the caveat being that they’re tied to item unlocks too. You can also add mutations over the course of each run to provide passive buffs to your play.

Each new item creates new builds and variance for future runs. There is one other form of persistence and where the metroidvania elements come in. Hidden throughout the game are artifacts that unlock new abilities that allow you to explore new areas. For every new area you visit means a new biome, new enemies and challenges, and new recipes to find. 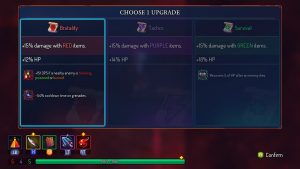 Dead Cells is a worthy successor to the action rogue-like focus of Spelunky, but it also retains some of the issues when it comes to high level play.

Like Spelunky, Dead Cells’ focus on player skill above abstracted elements is a major part of the game’s design, but it also hurts replayability to some extent.

For someone like me who has spent over 30 hours playing the game from Early Access to release, I’ve seen the majority of what the game can throw at the player. Similar to Spelunky’s biome design, the different stages begin to blur together with the same basic flow for each run. Running through the ancient sewers 5, 10, 50 times and more doesn’t change what you’re doing.

The use of artifacts is a good touch, but outside of the wall run, the other ones just don’t have a general purpose that gets integrated into your routine. I would love to see more events like mini-bosses, bonus areas, and so on, just to keep things fresh.

Another problem I have has to do with some difficulty spikes, and how the game seems to have trouble giving you the tools to succeed.

Dead Cells’ may have a focus on player progression and skill, but the abstraction still will determine victory or failure. The game’s difficulty has a way of spiking after the first boss fight in a few ways.

First, enemy stats and general damage goes up. If you don’t have your build coming together thanks to synergies or finding high tiered items, you’re going to be in trouble. Starting from after the first major boss, enemies begin to attack more furiously and this presents a problem with the design of the mechanics.

Enemies who can attack in multi-hit combos can’t be adequately fought in melee range without a shield or debuffing item. The issue is that they will attack faster than your dodge animation can finish; leading to cheap hits.

I feel the game could do a better job with informing the player about damage reduction and increased damage received modifiers on your equipment. This can mean the difference in life or death when fighting the last boss…speaking of which. 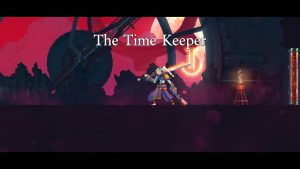 All bosses are fixed encounters without any deviation

Dead Cells runs into the same problem that FTL had when it came to progression. Even though you are going to be finding random items throughout your run, you are still fighting preset bosses with established patterns.

When random progression meets fixed bosses, it creates uneven difficulty curves for players. Some fights are noticeably easier or harder depending on what you found that run.

This becomes even more prevalent when you reach the game’s higher difficulties. As you go up in difficulty, your ability to heal gets reduced; in turn, it reduces viable builds and mutation strategies.

I’m also not a fan of limiting the player’s ability to heal as the major change on the higher difficulty levels. Given the chaotic nature of the gameplay, it’s very easy to take a hit when fighting a lot of enemies. Sometimes the alert that an enemy is about to attack gets drowned out by the effects flashing on screen.

Dead Cells is an amazing game, and another example of how much rogue-like and procedural elements can add to a title. Motion Twin deserves a lot of praise for the game and the work they’ve done to it. If you’re looking for a great action game, this is a must play.

How Digesis Is Applied to Video Games