Doodle God was a popular casual mobile game that has recently made the move to the PC. The casual game combines basic puzzle solving with the humor of the ages. While it doesn’t grow in complexity, the game’s lighthearted humor and basic pick up and go play make it a great time killer.

The concept of Doodle God is that you are God and it’s your job to take the basic elements and create life, technology, drinking, zombies and a whole lot more.

How it works is that you start with the four basic elements of fire, water, earth and wind; combine two elements and if they are compatible it will produce something new. From there, each new element you create will let you mix and match more and more as you keep on creating new things; with each new combination giving you a funny or insightful quote about the element. The progression model is simply based on how many things you create and as you hit certain thresholds, you’ll unlock new quests and things to do.

Besides the regular play, there are puzzle modes where you must create specific elements based on a theme, combining multiple elements to create special artifacts and others that become unlocked over time. Everything in terms of content is available via play and there are no in game DLC packs to buy. 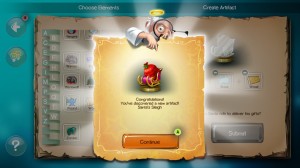 There are however microtransactions for unlocking hints that recharge over time or you can spend 1.00 for a set. These hints will give you clues of varying degrees to help you figure out new elements to create. There are also one time quality of life upgrades that let you purchase the ability to grey out combinations you’ve already done and other ones too.

Overall, Doodle God is a simple game that scratches that “one more turn” itch of trying to keep filling up the world with elements. The problem though, is that despite being a puzzle game, the main complaint I have is from the adventure genre.

Doodle God is all about hours of mixing and matching elements to see what you can come up with, but the game’s progression model can become stalled very quickly due to the solutions. It’s important to point out that you’re not the one figuring out or creating solutions, everything has been predefined by the developers. This means you have to think like the developer in order to figure out the elements and this can become annoying as you get later in.

The game relies a lot of explicit knowledge on the player’s part to figure out how the various elements go together. The problem is that the game requires a lot of outside knowledge in order for you to create new elements, for example: How to create milk, worms, grass, etc.

The game expects you to already know how things work and makes no attempt to explain things further. You can’t click on an element for more information on what it is for example. This increases the problem when you get to more niche elements like zombies, vampires, magic and how you really just have to take a shot in the dark to figure out how to make them. For example, after five hours of playing, I still couldn’t figure out how to make grass. 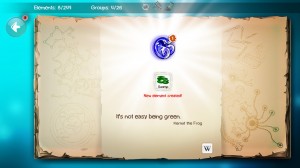 Figuring out some of the weirder combinations either require trial and error, reading the developer’s minds or using hints

The game also falls into the classic adventure game trap of having combinations that didn’t work, become useful at different episodes of the game, further complicating matters.

While the game does feature microtransactions, you can basically get through it a little bit each day as you wait for your hints to recharge, but having microtransactions in a purchasable game can rub consumers the wrong way.

There are quests and puzzles for you to do that have their own rules and formulas along with a tournament mode which I could not play at this time. While these do give you more challenges, they still are limited to the basic mechanics set up at the start and don’t change or add anything to the gameplay.

Doodle God sits between a basic puzzle game and a lighthearted casual title without truly committing to either; it’s a great game to mess with if you have some time to kill, but there isn’t enough depth to the mechanics to make you want to commit a full session of playing to it.

THOUGHTS ON
“Doodle God: Mixing it Up”