Door Kickers continues the tactical tradition of the SWAT series in attempting to merge gameplay and design with SWAT operations. The game was on early access and was finally release a few weeks ago. While there is plenty of game here, this feels less like a precise operation and more like an exercise in frustration.

Door Kickers is a tactical strategy game featuring pausable real time action. Instead of having a story or overarching content to play, the game’s modes are split between single mission sections and campaigns where your squad’s stats are persistent across the set of missions.

Every mission starts with the game paused while you are in planning mode. Some missions give you assigned officers while others let you select those from your squad (we’ll talk more about your squad members in a minute.) While the game is paused, you can issue multi waypoint commands to every member of your team. Your officers will follow your orders to a tee while engaging with any armed thugs that they run across.

Getting through a mission requires surgically moving through the area while keeping your officers covering each other to keep them alive. Advanced maneuvers include staging multi room breeches, using items like flashbangs and all that lovely stuff that goes with a plan coming together. 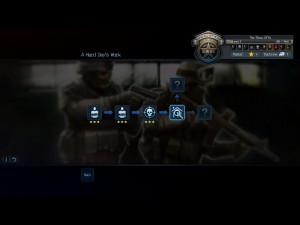 Door Kickers doesn’t have a story, but campaigns and single missions for content

You’ll get high marks for completing a mission based on the following parameters: How fast you went through it, did you lose any officers, and special conditions like getting through with one officer, not pausing and doing everything in one plan etc.

Door Kickers also features an extensive meta-game that helps tie everything together.

Being a Team Player:

Without having a grand story or campaign, progression in Door Kickers is tied to the meta-game. In the upper right corner of the main screen, you can see your progress based on a few areas. First is a squad level that goes up with completing missions, this unlocks new classes that you can assign officers to and doctrine points that provide passive buffs. The classes determine what weapons your officers will use and having a diverse set up is critical for the later missions. Also, the persistent mission campaigns are locked to the meta-game and you won’t have access to them starting out.

For completing missions within the specific parameters mentioned above, you’ll gain stars which can unlock new gear. New weapons and armor have different stats that allow you to customize how each officer responds, while items provide different functionality like easier breeching, tazers and more. 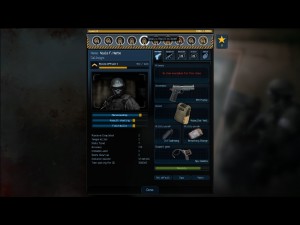 This is a great example of Meta-Game design, as it provides suitable rewards to go after while gating advance mechanics away from novices.

Once you get going in Door Kickers, the combination of tactical squad gameplay, Meta-Game rewards and content and the challenge of play, are all good motivators to keep someone interested.

Yet Door Kickers falls hard in one area that no amount of great gameplay can fix: The UI.

Door Kickers’ UI is one of the worse I’ve seen since Massive Chalice and is yet another example of how it can crush a game. Let’s start with the tutorial that does a horrible job of explaining the game play, options or even the Meta-Game. In fact, there is no in game mention of the use of stars, doctrine points or even what the classes do. This right there is a huge no-no as a game developer; you need to explain your Meta-Game mechanics if you want someone to become invested in it. I didn’t even know there were alternate means to breech doors until I decided to look a little further down the unlocks list.

Trying to plan things out, the whole thing becomes a convoluted mess when you have more than a few officers in a mission. There are no distinguishing elements to differentiate who the marks on the map belong to. Nor are there ways to give multiple officer orders or delete them, forcing you to do everything one at a time each time. And as a side note, if someone does know of a way to do multi officer commands (besides the go signs) and post it, that does not excuse the fact that the game doesn’t mention it or have any indicator on the UI. 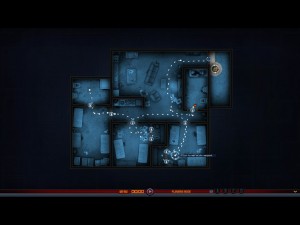 The Planning mode despite its importance, features a very poor UI that requires a lot of down time to make use of

Some of the conditional rules aren’t explained that well and I was watching my officers spot someone, shoot them and then keep moving even though the person wasn’t dead, while other times they would stop and finish them off.

There were no hotkeys from what I could find on the UI itself and that’s another massive strike against the game.

Even though Door Kickers has great gameplay to it, I’m not going to fight the UI to play the game, and I shouldn’t have to. If you want to see me try to get through the game, here is the video spotlight I did on it.

Door Kickers is sadly an example of a game that has great potential, dashed by one of the more unassuming elements of a good video game. I don’t know if the developers looked at any Strategy games for inspiration on the UI, but they should have spent more time with it. There is a post coming on the importance of hotkeys or instant commands that I think Door Kickers will be the example of what not to do.

In today’s market, all it takes is one major strike against your game to drive people away and to one of the other many titles available. While Door Kickers is certainty unique, uniqueness is not enough to get around a core problem with the game.

The Unique Journey of thatgamecompany