Last time I spoke about Drox Operative, it was spotlighting the game during the beta. Since then, Soldak Entertainment has been hard at work with patches and the upcoming expansion: Invasion of the Ancients. With the expansion now in beta I felt that this was a perfect time to kill two birds with one stone — Spotlight the changes with the expansion and take a more critical look at Drox Operative overall.

Living in a 4X World:

First off, here is the original spotlight I did on Drox Operative which went into detail about the basic game systems and design. The patches since, have largely been stat and balance related but there have been a few tweaks here and there.

Whenever you enter a new system, you can see if there are any quests that you can do either by looking at the name on the top right, or from the relationship screen.

Manual aiming weapons have been added in the form of the ram accelerator weapon type and for the twitch fans, it helps to keep combat engaging. One of my favorite changes that were added in was further differentiating the races by their ships. Now, every race gets an extra slot for equipping a specific type of component while reducing its power consumption in that slot.

Not only does this allow the player to start off slightly more ahead than before, but it also opens up your abilities and allows you to try out more items without having to go up multiple levels and increasing the command stat.

On to the expansion which adds some subtle and not so subtle changes to the game. First is a new race: The Scavengers who has a unique equipment that allows them to recover hull and armor health by destroying enemy ships.

Loot design which was a huge point that I talked about both in my original spotlight and my interview with designer Steven Peeler has been enhanced with socketable items and chips. Now as you’re fighting and looting around the galaxy, there is a chance that any component that drops will have a slot that a chip can be installed in.

Chips come in different rarities and can modify a component in any number of ways: reduce power load, increase critical hit chance and much more. Chips are a onetime deal and once used are gone for good. But given the rate that you’re fighting enemies and such, it won’t be long before you’ll find more chips.

Space stations can now be built by the various races and pirate enemies, giving them more options and control over the gamespace. Along with new enemy types added with the expansion including new types of ranks for enemies. 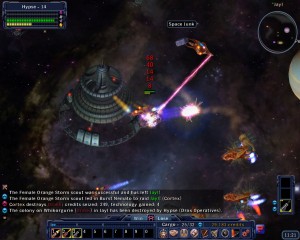 Space stations can be a godsend for defending planets or a curse for when you have to assault one.

The mechanic of persistent galaxies comes into play by allowing you to keep the same pirate threats and relationships between the races, but with a new randomized game space.

Another feature set up to change the way you play are drox operative assigned quests.

Before, your organization just left you alone to your devices while making slight suggestions for whom to support and such. Now, you may get quests directly from them that require you go after a specific race or something to have any chance at winning the galaxy.

All in all, Invasion of the Ancients is more to love about Drox Operative but I find that I’m not totally enamored with it compared to Din’s Curse.

My biggest problem with Drox Operative has to do with the main bullet point of the game: That you’re just a ship in a 4x universe. I just don’t find it as compelling personally, as the dungeon crawling in Din’s Curse.

For example, if I get a quest in Din that says that the town’s water supply is poison or a shop-owner has been kidnapped, I know immediately what the stakes are if I fail.

But in Drox, when I get an alert that some random planet in some random sector has rioting going on, I have no idea how that’s supposed to affect me or my mission. Further still, the player can perform actions that can affect the relationships between sides or steal technology. But outside of quest related actions I wasn’t sure what the overall impact that I was doing.

Also, playing on the higher paced settings, where quests show up quicker, relationships were adjusting so fast that I didn’t have time to really do anything small to impact them.

Another issue was just finding where to go, as we all know space is vast and empty. I had plenty of times where I couldn’t find the gate or warp to a new system, as some systems have multiple gates but there are no indications unless you comb the outer edges entirely.

This also raises the issue of upgrades and how it can be a pain to improve your ship. You need to keep an eye on how much power your components are using up, as going into the negative will affect your ship. The amount of power components use increases side by side with their general attributes. 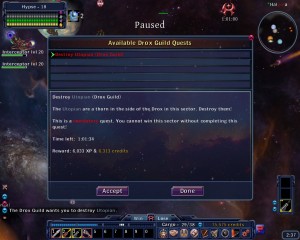 Quests from your organization help to shake up the general play.

However, if you can’t find any upgraded power supplies, you’ll be left with all this new loot, but no way to use them. Since loot is randomly dropped by enemies, your only other option is to rely on the planets themselves.

But with every planet randomly stocked with goods at galaxy generation, sometimes you may literally have to explore the entire galaxy to find that one upgrade you need.

With that said however, the loot design of Drox is one of the best I’ve seen from the ARPG genre recently. As I talked about in my interview, using the various components to effectively build your own class is a great twist and the further you play, the more varied components will appear. In turn, allowing you to start tweaking your ship in terms of utility to how you want to play.

Drox Operative is another unique and fascinating take on the ARPG genre from Soldak. And as I commented on in my interview, the best part is each game has design strong enough to stand on their own instead of rendering any of them obsolete. And I can’t wait to see what Soldak does next and how they will further create new experiences in the APRG genre.