Ducktales Remastered: In the Poor House

Wayforward in the past has worked on multiple games that harkens back to the old school days of the game industry: From Contra to the Boy and His Blob and original properties. When they revealed that they would be working on a modern version of the classic Ducktales game, nostalgia swept over a lot of people.

However this is not a case of digging up forgotten treasure but of finding false gold.

Ducktales came out during the NES era where Capcom was one of a few studios to work on Disney properties such as Chip and Dale, Darkwing Duck and of course Ducktales. As one of the premier platformer designers of the era you can probably tell the basic design of each game.

Ducktales stood out from other platformers in several ways. Similar to Mega Man, the player could attempt any level with exception to the last in any order. Levels were a bit bigger and filled with multiple secrets and different endings based on your score or treasure at the end.

Mechanically speaking, Capcom implemented a strange mechanic in the form of the pogo jump: Which let players continuously bounce if they can correctly time pressing the jump button. This along with hitting objects with Scrooge’s cane would be the player’s only means of offense.

Right away, you’ll see the big difference between Ducktales today and the original version with the graphics. The entire game has been updated graphics wise and looks really good. Characters have a great detail to them and many of the original voice actors from the Ducktales cartoon made a return here.

The game now features a tutorial level that introduces the basic mechanics to the player with the rest of the game following in the classic game’s footsteps. There are a few notable gameplay changes here and there. 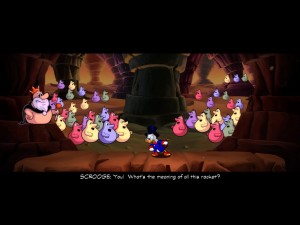 The updated art style looks amazing and very close to the cartoon.

You can now set the pogo jump to work while holding down the jump button in mid air, as opposed to having to press down and jump.

Money can now be used to buy concept art, soundtracks and more from the bonus menu.

The biggest change between old and new Ducktales is the redesigned boss fights. Bosses have new patterns making them a bit more challenging. Difficulty levels determine how much of a map you can view from the pause menu with extreme difficulty forcing you to play through the entire game in one sitting.

All in all, Wayforward has succeeded with bringing back Ducktales, but this is one of those cases where rose tinted specs may have been a factor.

Ducktales follows note by note of what the original game was all about and the problem is that a lot of Ducktales‘ design is simply outdated. Infinite enemy spawns are very prevalent in the game, making it a hassle to go back and explore sections.

Scrooge’s pogo jump can be sometimes hard to aim right to hit an enemy and there were cases where I didn’t hit dead center and got hurt. The lives system is just archaic these days and with many bottomless pits, can make things frustrating.

The game is also very short with only seven levels, one of which being the new one that was added in.  And outside of unlocking the extra art, there isn’t much reason to replay the game.

Now not every problem was held over from the old days and Wayforward has put a few in themselves. The cut scenes are just droll, with characters slowly giving their lines which most aren’t that funny. While the voice actors were good, the writing lacks any kind of wit and seemed to be written solely for younger audiences. 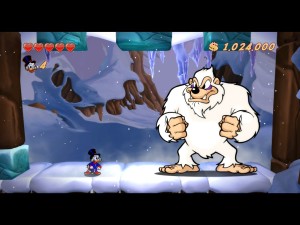 Boss fights are still about figuring out their patterns old school style.

I can’t even imagine how annoying it must have been to play the game at launch without the option to skip the cut scenes.

Hit detection was off in some areas as I had cases where I was still hit by environmental hazards even while pogo jumping.

The redesigned backgrounds and art can sometimes make it hard to tell what parts of the ceiling are scenery and which ones will get in your way.

Ducktales remastered is an odd game to critique as on one hand Wayforward made a faithful recreation of the original game but on the other hand, the design does not hold up today.

If you’re a fan of the original or the cartoon, Ducktales may be worth it for the trip down memory lane. But if old school platforming is not your thing, then not even the awesome opening theme will be able to save it.