After the release of Etrian Odyssey 4 earlier this year, fans were surprised to hear that not only a new game was coming so soon, but that it was a remake of the original Etrian Odyssey from 2007.

With Etrian Odyssey Untold, Atlus is looking at attracting new fans to the hardcore series and in the process we’re left with an odd mix of new and old features.

Back to the Grind:

When Etrian Odyssey first came out in 2007, the game had at the time the standard Atlus promotion of no promoting and few copies printed for the US market. Most reviewers marked down the game for the hardcore difficulty that the developers were trying to bring back as homage to classic CRPG design.

However, fans looking for a modernized take on being able to build your own party and go dungeon crawling loved it and now we’re up to five games in the series.

Etrian Odyssey Untold features the same story, dungeon and cast from the original game, but with new features.

The first and most jarring would have to be the inclusion of an actual story mode with a set party, complete with voice acting and animated cut scenes. Here, players join a preset party with an original class: the Highlander along with the Gunner class from Etrian Odyssey 2.

With the preset party, the developers avoid the difficulty curve of previous titles where players would not know how to build their party and create one that may not work. While the preset classes are good enough to beat the game, you will eventually unlock the option to change their classes if you want.

The story itself is more your standard JRPG affair complete with silent protagonist and even amnesia thrown in for good measure. The developers based the story around exploring the dungeon but the story mode does add in a smaller new dungeon, complete with new enemies and bosses to tie the story together. 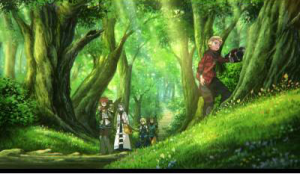 Animated cut scenes are one of the ways Untold is meant to appeal to newcomers to the series.

While the original dungeon features a lot of the same challenges as the first game, the developers have touched it up with the Etrian Odyssey 4 engine.

FOEs (mini boss enemies) have new patterns of movement and enemies now benefit from the front and back row addition from EO 4.

In order to attract new fans, Atlus has expanded the difficulty setting to picnic, normal and expert. Picnic is laughably easy with normal being about as hard as you would expect from a JRPG. Expert is essentially the same difficulty that fans have come to expect from the EO series.

If you don’t want to deal with the preset classes and story, classic mode gives you the option of creating a party with all the original classes and removes the new story. You won’t have access to the highlander or gunner unless you beat story mode first, nor the new story dungeon. But, all the new features, enhanced enemies and other changes will still be available.

While Etrian Odyssey Untold uses the same engine from EO 4, it lacks the overworld exploration, dual class system and three tier class design. But the developers did add in new quality of life features to breathe new life into the game.

For people who don’t want to spend a lot of time on map drawing, you can now set the game to auto fill in floors and walls as you move through along with a faster walking speed option. Filling out enough of a floor unlocks fast travel, allowing you to instantly go to the staircase of a floor and bypass having to walk through it again.

A new guild house option in town allows you to take on quests at the request of an ally. They can also provide you with enhanced buffs that last until you rest again. While Etrian Odyssey Untold doesn’t have the dual class system to add more utility to your party members, it does have something new.

As you explore the dungeon, you may pick up stones called grimoires which can be taken back to your guild house to combine into a new item. These items can be equipped to your party members and allows them to make use of other skills and equipment based on what stones you used in the combination process.

So in theory, your warriors could learn healing abilities or your medic could learn how to use axes and bows. While it’s a good idea, I found it a bit too random to fully make use of and preferred the dual class system.

Speaking about classes, perhaps the biggest change for returning fans is the redesign and re-balancing of the returning classes. In the first EO, the classes featured very basic skill trees based around one or two functions for that class. 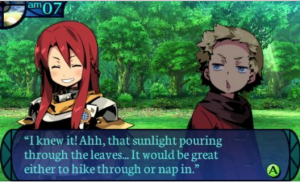 The story characters bring some energy to your group, but suffer from the JRPG tropes seen in other series.

Now, each class has been given a retouch, with new skills and changes to previous ones. The medic class has had their immunize skill which was game breaking powerful, been toned down.

And at the same time, now can inflict status aliments onto enemies. Another example, the protector who was the tank class, can now heal characters.

As you can see, Etrian Odyssey Untold is a much bigger game compared to the original, but I do have some reservations.

Having a story mode in a game like Etrian Odyssey which is known for having players create their own parties is a confusing addition, but I know why they did it. A set party with JRPG tropes is a much more accessible design compared to the series’ penchant for hardcore difficulty.

And this also factors into the new difficulties with making what was considered Etrian Odyssey’s “normal difficulty” now the expert mode.

While Etrian Odyssey 1 was a great game, the series has evolved over the years with the dual class system, more diverse class design and having an over world to explore with none of which are featured in Untold.

In that regard Etrian Odyssey Untold feels like two steps forward and three steps back.  It is arguably the most accessible game in the series thanks to the quality of life improvements and changes under the hood. But it also lacks the additions and depth that fans have come to expect from the series.

I would have loved to have seen more refinements from Etrian Odyssey 4 such as the more refined skill trees. For longtime fans of Etrian Odyssey, Untold’s improvements were good, but I don’t know if they were $40 good. But if you’re a newcomer who is looking to get into the series, Untold is a great buy and I would suggest also playing Etrian Odyssey 4 afterwards once you’ve gotten your feet wet with Untold.

Regardless if the next game in the series will be another remake or an Etrian Odyssey 5, I hope that they continue with the depth that has won so many of us over and keep the JRPG tropes to a minimum.

A Year of Arcen Games