One of the best aspects of crowd-funding is giving gamers a chance to play genres and designs that would be overlooked by the major publishers for a variety of reasons. It could be from the setting, to the genre or even the gameplay.

Expeditions Conquistador was a kickstarted title that may not scream mass appeal, but it is an amazing game… with a few holes in the boat.

To The New World:

Expeditions Conquistador is a tactical role-playing game made up of several different game systems. Taking place in the 16th century, your mission is to lead a crew from Spain to the new world, where fame and treasure await.

The first thing you’ll do is define your character and the crew that you’re bringing along. Your character’s attributes will affect events during the game, with the actual stats also modified based on your crew.

You’ll select your crew from a preset list of men and women broken down by their class, personality and starting equipment. There are five classes in the game: Scout, Soldier, Scholar, Hunter and Doctor. Each class has different abilities during combat and what they are best at outside of it (more on that later.)

Personality is broken down into three traits that affect their morale based on your choices during events. The higher someone’s morale, the more likely they’ll get critical hits. If your crew’s morale falls too low, they may mutiny and leave. The challenge is that it’s near impossible to get a completely like-minded crew and you’ll have to take the good with the bad: Like having no choice but to take a racist doctor along or greedy scout.

Once you’ve made your selections, your journey begins with a stop off on a colonized island on your way to Mexico. Just getting to Mexico is considered the first of two campaigns that come with the game.  Surviving in Expeditions Conquistador requires you to effectively manage your followers during combat, and keep your expedition supplied while exploring. 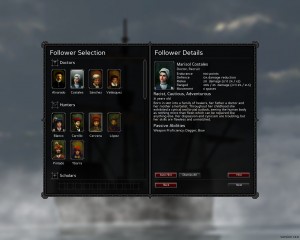 Racist doctors may not like working with the locals, but they’re the least of your problems.

On the world screen, you’ll move your caravan around with time frozen in towns.

Here, you can trade your four main resources– valuables, medicine, rations and equipment. Towns will get new supplies with certain resources worth more or less depending on their stock.

Medicine and rations are very important as everyone in your caravan consumes one food per night and anyone who gets sick or incapacitated during combat will need medicine to recover.

Once you are outside of town, time ticks down with every step you take with the amount of steps determined at first by your scouting rating. When your steps run out, you’ll have to set up camp.

Every night there are five main tasks that can be divvied up by your followers: hunting will hopefully yield meat that can be consumed the next day instead of rations. patrolling that may turn up useful resources, guarding that will try to prevent your resources from being stolen, preserving extra meat so that it doesn’t spoil and lastly turning herbs into extra medicine.

Each class starts out with stat points that favor one task which you can improve them further which we’ll talk about next.

Improving your followers can be done two ways. First is by promoting them using experience. Experience is earned for completing quests and surviving battles. A smart move by the designers was that experience was tied to the group, not to individual followers.

When you promote a follower, they will gain a morale boost, increased attack and defense, skill points for camp tasks, unlock a class specific skill and lastly you can apply a passive perk to them. 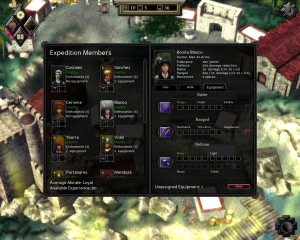 Using equipment to improve your characters is important to help deal with being outnumbered during combat.

Equipment essentially acts as generic stat boosts for your followers. You can apply equipment to either the weapons or armor of a follower and increase their attack or damage resist respectively.

The higher rank a follower is, the more equipment you can apply to them.

If this was all there was to Expeditions: Conquistador, then we would have an interesting but limited experience, but the addition of a complete tactical combat system helps elevate the game.

Combat as mentioned was its own separate gameplay but all the choices you made with your followers and their upgrades play a part.

Battles usually have you selecting either 3 followers (for mock battles or tutorials) or normally a compliment of 6 followers for actual fights (your character does not fight.) Most of the time you can arrange your followers on the field and then it is time for battle. If you have any barricades or traps (that can be bought or built from the world map) you can place them on the field.

Unlike other tactical games, movement and attacking are not completely tied to each other. If you move to attack someone either with range or melee and you still have movement points left over, you can retreat that character back.

The trick is that whenever someone moves directly past an enemy, the enemy gets a free attack or opportunity strike. That is designed to prevent characters from easily retreating and punishes ranged units from getting caught in melee. 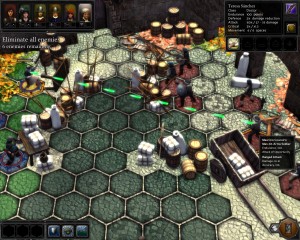 Ranged units are helpful but are currently lacking compared to melee classes.

Ranged units have to deal with the concept of cover, as enemies in full cover are immune to ranged attacks, while those in half cover have their to-hit chance lessen.

It can be hard sometimes to tell what is considered full cover and where the blind sides are.

Characters who are surrounded on opposite sides will find themselves susceptible to flanking strikes from the two enemies. These attacks do several times more damage and can knock out someone within a few rounds.

The world map and combat are tied together not only by the upgrades you give your followers, but if they are incapacitated during combat. First, characters will lose several pieces of their equipment and they will suffer one of various types of injuries.

Injuries come in various degrees of severity and must be healed by a doctor or your character at camp. The worse the injury, the more medicine needed and days they will be out of commission. And yes, injured followers cannot fight in battle, or help out when camping.

Expeditions Conquistador is an interesting game and in my opinion feels more like the original X-Com with its multiple systems than the latest XCom did. However, when you have so many connected systems, it’s easy for things to not work right, both technical and design wise.

Expeditions Conquistador as mentioned was a kickstarter game and while the developers deserve a round of applause for what they accomplished, the game currently has some issues.

Let’s start with technical , first there were reported problems of the game not being optimized for certain video cards and causing them to make their GPU start heating up. I had that and had to reduce the quality of the game down two graphics quality degrees just to keep it from acting up, this on a machine that could run Bioshock Infinite and Dark Souls without any problems.

The game also crashes every time I exit which isn’t a huge deal, but needs to be mentioned. I also ran into a game ending bug where during a tutorial, the AI literally stopped working and refused to continue its turn, forcing me to kill the game from the task manager.

Every character conforms to one model based on their class on the tactical screen. One of the charms of tactical strategy is making your characters personalized and having them go at it. Still, graphical enhancements were one of the stretch goals for the game that didn’t make it, so I can forgive them on this one.

Game balance is the big one which the developers have been trying to fix via patches, but isn’t quite there yet. As it stands, tactical combat greatly favors melee characters as opposed to ranged.

Since melee units don’t have to worry about missing an attack (they can still be blocked by shields for reduced damage,) their damage output is more reliable. There is never a situation (without a specific passive skill,) that a ranged unit has a 100% chance to hit, even standing 2 spaces away from an enemy who is outside of cover. 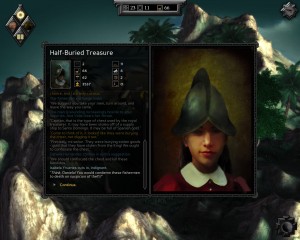 Character portraits and loading screens have a great painting aesthetic to them.

Also the scout class, who is the strongest melee class, has such a high movement range that they can normally close the gap to ranged units within one to two rounds despite the size of the map.

This makes it very hard to use ranged units when you have enemy scouts bearing down on your position.

Not only that but support units (doctors and scholars) have their damage and accuracy stats so low that they can’t be used to provide backup damage that well. And when you can only normally have 6 followers during combat, one additional damage dealing class can make all the difference.

If you could buy or create upgraded weapon classes that had more accuracy or higher damage, things would be different. But for now, scouts and soldiers (with a doctor as backup) is the best way to go when it comes to fighting.

The limited progression of your followers also makes battles arbitrarily difficult. When you start fighting enemies who not only outnumber you, but have higher ranked characters, equipment upgrades won’t be enough. My suggestion is to avoid the main quest battles for as long as possible and instead explore to build up experience to promote your characters.

One UI complaint that I have to mention is that I would have preferred to see exactly who in my party would be affected and how by my decisions. After you make a decision you’ll get a generic message saying that all of a specific personality type has had their morale changed but for such an important detail, knowing things before hand would help. 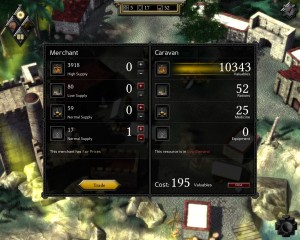 Trade is the primary way you’ll increase your vital resources. With trade value changing on a day to day basis.

The last issue is a nitpick but while the game does hit you with random events, the actual missions and world map are set every time, downplaying the exploration aspect with each new game.

Expeditions Conquistador is a game that tried to do something different and largely succeeded.

There is a lot to like and the game design has a unique flavor that we don’t see too often these days. If it wasn’t for the technical and balance issues I would recommend the game no questions asked.

For now, the game can be hit or miss depending on your preference for strategy, but hopefully the developers have earned enough to start adding in those extra stretch goals to really make this game a grand adventure.