The Final Station: Running Behind

The Final Station starts off with a great hook. The concept is that zombies have taken over and you must survive via train. While the basics are there, The Final Station just doesn’t have enough steam to make it to its destination.

You play as a recently hired conductor on what appears to be a planet similar to Earth. On your first day working, a strange attack occurred that is turning people into creatures. With the cities shut down, your job is to transport important items to their destination while surviving the threats.

The rules are pretty simple for The Final Station. Each city requires you to find a train blocker code in order to move on. As you explore, you’ll find resources, threats and survivors you can take with you. The objective remains the same: Find the code and get back to the train.

While you are heading to your next destination, you’ll need to manage the train and any passengers. Food and first aid are rare, and you’ll need to decide who gets what and when. Getting people to their destination will reward you with money and items. The world of the game is quite interesting and the game makes great use of pixel art. 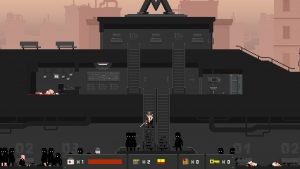 The mood and setting of the game are great, but the gameplay stalls early on

The Final Station’s bullet point is that you are always hurting for supplies as you explore what remains of the world.

Everything about the game should lead to a great design, but the game stumbles out of the station.

Trouble on the Tracks:

Most games that deal with limited resources are of the rogue-like genre. The reason is that rogue-likes are great at providing tension and the uncertainty of finding what you need. Things tend to fall apart when you have a linear experience, and there’s nothing more linear than riding the rails.

The Final Station’s gameplay of traveling from place to place would be amazing if this was a non linear game. However, being on-rails (pun intended), diminishes the game’s design. Because each city is linear, scavenging for supplies becomes repetitive. Each city area takes maybe at most five minutes to go through and get back to the train.

The basic gameplay of exploring and fighting takes a long time to pick up steam. New enemies and situations are introduced slowly to the player. The enemies themselves all fall into the same pattern of “Rush the player.”  The majority of said situations come from the train itself. 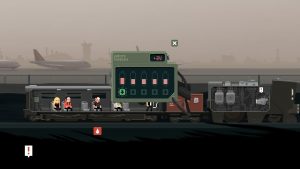 As you ride from city to city, you’ll need to manage one aspect of your train and the people. Your passengers don’t understand how to get up and get food or supplies.

The train itself is supposed to challenge you to balance multiple issues at once, but it just comes off as forced busy work to keep the player active.

There are no choices by the player. Once again, the linear levels mean you have a fixed number of supplies no matter how well you play.

When you start dealing with people who are bleeding, they are a never-ending drain on first-aid kits (until the end of the act). You can’t choose different places to visit, upgrade your train, or transport anything else. The only thing you can do is craft first aid and bullets, but it’s not really forcing the player to make hard choices.

Passengers are supposed to help fill in the lore of the world, but there is a design conflict. You can only listen to people when you are in the passenger car. Since you are moving back and forth to use supplies and fix issues, you’re going to miss a lot of the lore.

And that’s the rub: The Final Station’s story is interesting. As the game continues, you’ll see the havoc of the attack and how there are deeper issues going on. The story is up to you to make sense of via the lore and passengers.

The game just lacks the gameplay to be as engaging as the plot. A rogue-like where you could upgrade your train and see how long you could last would be amazing. Managing a train at the end of world should be exciting, not time consuming.

Waiting on the Train:

For what’s there, The Final Station tells a good story that’s engaging until the very end. I really hope that the game does well enough for the developers to explore this design in a rogue-like setting. As it stands, The Final Station is a decent trip, but not one that’s worth getting the round trip ticket.

A Critical Thought: The Rise and Fall of Rock Band

First Look at The Warlock on Firetop Mountain