A Swinging Time With Flinthook

Tribute Games retro-inspired hit Mercenary Kings mixed old school design with modern touches to create something original. For their next game Flinthook, we have similar aspirations; taking a page out of retro platformers with a mix of rogue-like design. While the inventiveness doesn’t go far enough, Flinthook could be the start of something amazing.

You play as the bounty hunter Flinthook who is on a mission to take out the various pirate captains in the Mermaidon System. Armed with your gun, hook, chronobelt and a living compass, it’s up to you to raid multiple ships to take them out.

The controls and feel of the game should be familiar to anyone who grew up playing platformers. The unique touches come into play with your hook and chronobelt. There are always hooks set up in each room that you can grapple to; with your velocity dependent on relative distance to the hook.

Your chronobelt allows you to slow down time; allowing you some breathing room during a fight and to get past certain barriers. The gameplay remains consistent across every ship, with special boss fights. The developers are hoping that the game’s procedurally generated levels will hook you.

Similar to the Binding of Isaac, Flinthook’s levels are procedurally generated out of set rooms. To mix things up, you can choose what ship to board before you start, and see different variants. The variants are passive conditions that impact the difficulty of the ship. Some of them could give you extra healing items, more enemies, a timer and more. 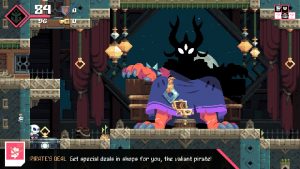 This can lead to some very easy levels, or taking things to the extreme depending on what the game rolls. Besides the main content, there is an infinite mode, hardcore versions of the levels and daily and weekly runs to do.

In order to show some progress, Flinthook has two forms of persistence built into the game.

Because of how skill intensive Flinthook is, the developers added in ways to smooth out the curve. Completing ships and boss fights will reward you with green gems. The gems can be traded at the black market to unlock permanent upgrades. You will also level up as you play, which unlock booster packs of perks that can be equipped to Flinthook. Perks are your main form of customizing Flinthook and are a necessity for the harder missions.

While Flinthook has a lot to like about it, the game sadly doesn’t reach as high as I would like.

Swing and a Miss:

Flinthook’s main problem at the moment is that it lacks the replayability of games like Spelunky or The Binding of Isaac. Despite featuring procedurally generated levels, there is nowhere near the number of rooms in the game compared to Isaac, or the difference in levels like Spelunky. Even after a few hours of play, I was already seeing multiple repeats of rooms. 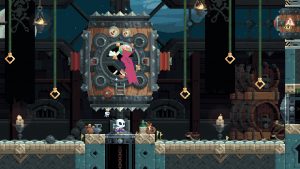 The bosses are great, but few in number

The variant concept was a good idea, but it doesn’t change the levels enough to make repeating rooms feel different. I was surprised about how there were very few bosses for a game meant to be replayed.

The game is set up to keep you coming back with the persistent elements, but the gameplay just doesn’t back it up.

From a control point of view, I found that the game could be a little button heavy at times. Boss fights will require you to aim at enemy, while preparing to hook away, while moving and of course hitting the fire button. There were plenty of times where I would bump into an enemy while trying to hook around and took damage from it.

Flinthook is another great entry in the rogue-like-styled genre. At this point, my issues are content-based; something that should be fixed over time if the game sells well enough. For more on the game, you can watch my spotlight and daily runs of the game over on the Game-Wisdom YouTube channel.

An Industry Insight Into Interacting With Your Fanbase