If you listened to the podcasts earlier this year, then you know that I was hooked on Marvel Puzzle Quest for the first half of 2014. The match 3 gameplay combined with the marvel license was a great hook for me. But eventually the pay walls and F2P design drove me away and I quit cold turkey. Now with Gems of War, the original developers make a return to the match 3 genre with a new F2P game, but blatant micro-transaction tactics makes me hard pressed to say which game is more exploitative.

The story of Gems of War follows your journey across a magical land and for the most part you can ignore it like I did. Gems of War like most F2P games has two main currencies: gold which is earned in game and gems which are the premium currency. Gems are used for cosmetic options and for buying in game resources like keys, gold and so on.

The game map shows different kingdoms that you can unlock with gold. Once unlocked the kingdom will give you gold over the course of the day and whatever one you set as your main will give you more. The heart of the game is of course the match 3 gameplay and the strategies available.

The rules are pretty much the same from the original Puzzle Quest. Matching three or more gems of the same color will remove them from the field and give you magic of that color. Match four or more gets you more mana and an extra turn. Get enough magic for a character and you’ll be able to use their special ability to cause damage, affect the board and so on. Matching skulls will allow you to directly damage the enemy which your damage will be based on the character’s attack stat. 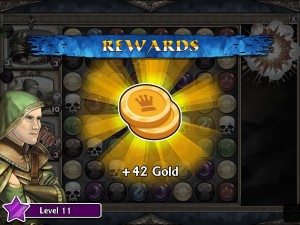 Gold is the primary resource and outside of winning PvP, hard to get unless you spend real money.

Where Gems of War mixes things up is with how you assemble your team. You’ll unlock units through progress and for opening up chests with keys either bought with gold or found.

Units come in different rarities and have different stats. Every unit has one special ability and affinity to one or multiple mana colors. Units can be upgraded with souls with the cost increasing for each level you add to a specific unit. This is the only way to improve their stats and influence their special ability.

The tactics of the game comes in with how you arrange your units before battle. The higher up on the list will give them priority when it comes to taking mana. Whoever is on top will be the unit that attacks or will be hit by the enemy. You’ll need to properly manage your team based on priority and who you want to attack and use their skills first. Having a full group of green mana using units is like putting all your eggs in one basket and makes it harder to use their abilities effectively.

The problem with Gems of War’s monetization model is that it’s of the most exploitative kind. In order to play any games, be it campaign, unique challenges and invade or defend against other players (you’ll fight an AI controlled team) cost gold. The gold cost increases the further you get into the game and once you run out, you’re done for the day unless you spend money to buy more. 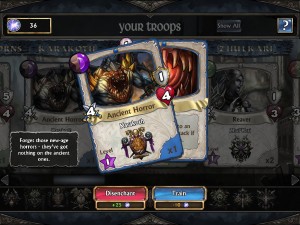 There are a lot of units in the game, giving you plenty of variety for team formations.

Now here’s the punch in the gut — You’ll always earn gold for winning a match, but it’s always far less than what you paid to get in.

This means you’re always operating at a deficit no matter how well you play. The only exception is the game’s “multiplayer” of attacking other players.

The game seems to be designed around matching four or more gems to get bonus turns and extra gold. But the problem is that they tend to happen at such a frequency that the AI will get them more and it will make things harder for you.

What would have been better would be if the player wins on their first go at a match, then they would receive bonus gold, with the amount decreasing for each time they play. That would reward players who learn the system and make them feel like they’re not being punished by playing.

One interesting debate is whether or not the game is designed to give the AI advantage, IE cheat. I’ve found that the game tends to set up a lot of four or more combos for the AI than they do the player. It seems like it’s more dangerous to go for moves that really affect the board state. Of course things could be entirely too random and it’s very hard to make a real determination at this point. A big tip is that you should be very cautious of the game’s hints as they are more often than not the worst choice.

Another issue is that true progression is locked to either getting lucky with finding keys to unlock new units or spending gold or gems to buy keys. This means that fielding more interesting units comes at a slow pace. This is where Marvel Puzzle Quest does exceed Gems of War as the single player campaign rewarded you with a great baseline of covers to field a party. 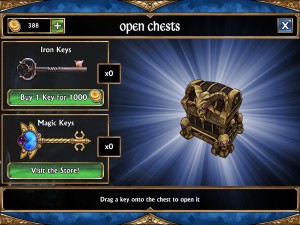 Unlocking units comes from using keys which are either bought or found rarely. But in turn, it drastically slows down getting new units unless you spend money.

Gems of War also lacks any graphical flair, no doubt from being designed on a F2P budget. All the characters are just stills with special attacks making use of the smallest of graphical effects.

Both Gems of War and Marvel Puzzle Quest feature a great foundation thanks to the combination of assembling a team that impacts the match 3 gameplay.

But they also suffer from the annoying trappings of F2P design. At the moment I’m not sure which one is worst as Gems of War hits you with it from the start but is more lenient over time. While Marvel Puzzle Quest at least delivers on a decent single player campaign before the microtransactions get unbearable.

It’s a shame as either title being released as a retail experience would have been amazing, but the monetization is of the worse kind as it’s more about punishing the player into spending money instead of rewarding them for doing so. And from what I could see, there is no real evolution or growth of the mechanics or concepts at the moment. But of course being an online title means that the game will no doubt be updated.

If you can put up with the F2P aspects, Gems of War is a great game in the vein of Puzzle Quest, but it’s going to cost you either time or money to get the most value out of it.