The 2D platformer genre is one of the purest when it comes to game difficulty thanks to a complete reliance on player skill above all else and in return the genre features a huge variety of difficulty. From simple casual titles, to Super Meat Boy and I Wanna Be The Guy.

With Giana Sisters, people complained that the difficulty of the game was over the top, but having played it, the difficulty wasn’t the problem for me.

The story is that one night Giana and her sister were sucked into the dream world and Giana splits into two forms based on her personality: Perky Giana and Punk Giana with their mission to rescue her sister.

First thing you’ll notice is that the game looks amazing, with the environments looking like a storybook that came alive. The twist mechanic of Giana Sisters is that you switch control of Perky and Punk Giana at anytime with each one having a unique power.

Perky can spin around while in the air to slow her decent while Punk dashes in any direction knocking out enemies and blocks. Gameplay is mostly platforming with light puzzle solving thrown in. When you switch personalities, the world reshapes itself: Either to a bright technicolor landscape, or an evil looking horror scene.

In response the elements and obstacles may change, with some platforms becoming solid/transparent or enemies becoming harmless.

The challenge of the game comes from trying to clear every level with a five star rating, which requires you to collect enough crystals and keep your deaths to a minimum. There are also hidden collectibles in the form of concept art which are usually placed way off the beaten track.

In terms of level design, Giana Sisters feels more like the original Sonic games than Mario or other linear platformers. While there is always a set finish line for a level, you’ll find multiple sections and additional challenges always hidden away from where you should be going. 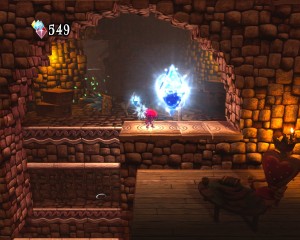 As we talked about at the start, Giana Sisters was criticized for its high difficulty. Personality, I didn’t find it ridiculously difficult as someone who has played Super Meat Boy and I Wanna  Be The Guy.

Don’t let the cartoonish visuals fool you as the game is definitely on the harder side compared to traditional 2D platformers like the Mario and Sonic games.

You will have to make tricky jumps and Giana can normally only survive one hit (but can find one-hit shield powerups.) Boss fights fall into the pattern memorization category and can be difficult until you learn their tricks. Checkpoints are spread out quite a ways and the length between two checkpoints does increase as you get further in.

Where people do have a point about the difficulty comes in the form of the unlockable difficulties. There are four difficulty settings in the game: easy (which was recently patched in,) normal, hardcore and uber hardcore.

There are also time and score attack modes that require you to focus on getting through the level the fastest or defeating enough enemies and collecting enough crystals.

While higher difficulties can be motivation for some players, it wasn’t for me. I didn’t feel the desire to replay the game several times with less of a safety net. Likewise, repeating the same level with a different condition didn’t interest me either. And this is where my main problem with Giana Sisters lie: I found the game to be very repetitive.

The game’s difficulty is on the higher side but the actual mechanics don’t seem to go anywhere. Once you’ve played through the entire first world you’ll have a grasp of the mechanics of the game and there isn’t any real growth beyond that, outside of the bosses that do change up the pace.

A lot of the obstacles and level design seemed to repeat world by world with slight variations to them. The one constant was switching between the two sisters to make hazards safe or platforms interact-able. 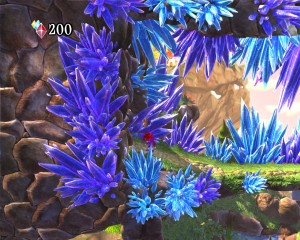 Sometimes the amount of objects on screen and dream switching can make it hard to tell what is going on in a scene.

As a contrast in Super Meat Boy, while the mechanics never change, each new world adds new obstacles and enemy types to alter the design and challenge. You may run into a quick puzzle, but they are few in far between.

The developers of Giana Sisters were definitely banking on players wanting to come back and play through on the higher difficulty settings.

However, if you aren’t interested in making the game harder, there is very little meat left on the bone otherwise. The stars don’t unlock anything else outside of the boss, but you should have enough to access it through regular play. The only thing that people who are just interested in playing through the game can go for is the collectibles.

One last problem was that for me, the graphics of the game can sometimes make it hard to tell what objects were part of the background and which ones are hazards. Since the environment changes each time you switch sisters it makes the levels look busy.

Ultimately Giana Sisters starts out with a higher than normal difficulty curve and interesting premise but fails to build on the setting or difficulty.  The idea of playing around with dreams could have been used to altered the game and make it different on each difficulty level but instead we have a dream that feels more monotonous than amazing.

The Grey Side of Morality in Game Design