The Half Minute Hero series started out on the PSP and have been recently ported to the PC. The series’ trademark of epic JRPG gameplay shrunk down to 30 second chunks remains the same and while it may not look like it; there is a lot to talk about here.

Half Minute Hero: The Second Coming is obviously the sequel to the first game. While you don’t need to have played it in order to enjoy the second game, easter eggs and some in game rewards are available for people who finished the first one.

The concept of the game is this — You have 30 seconds to defeat the boss before they will destroy the world. Time counts down whenever you are on the world map or fighting enemies. Killing enemies will give you gold and experience and the whole thing is accelerated to give you massive levels fast. 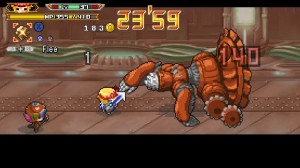 Combat is largely out of your control, however you do control team composition and formation

Gold is used to buy new equipment and most importantly to reverse time. Your ally the Time Goddess gives you the ability to reset the clock from one of her statues for an escalating gold cost.

The challenge of each stage is figuring out how to best get around the obstacles, strengthen your character and beat the boss before running out of time or running out of enough money to pay for the reset.

Despite the basic gameplay, the developers have a lot of varied situations to deal with and the game is more puzzle based than RPG at first glance. Combat plays out automatically so there is no control from the player, however you can set your party formation and team mates to take with you into each stage.

New to second coming is a difference in stage structure. Previously you would choose your stage from the world map but this time the world is open, allowing you to explore and fight enemies outside of the stages. While your level resets back down after a stage, you can take on extra challenges and give yourself a starting advantage by exploring and fighting in-between levels. A new character in the form of the hero castle allows you to fight giant enemies and can be equipped with parts to alter its stats.

The game’s story is full of JRPG satire and messing with time. Without spoiling things too much, you will be playing the game from different time periods and characters and the game likes to make fun of the fact that this is taking place over hundreds of years.

The stages don’t take too long as obvious by the half minute starting time of each. The only problem that I have with Half Minute Hero is that the advantage of having short levels also means that you can’t do much in terms of variety.

There are a lot of levels in the game split between the different characters; however the basic theme remains the same throughout: Run around and level up, reset time, wait until you are stronger than the boss and fight to win. There are a few levels that do something different like having to our run something or get out of an area, but the format remains mostly the same. 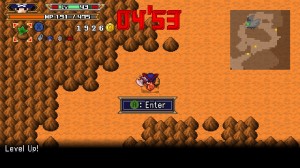 It doesn’t take long before you’ve seen all that Half Minute Hero has to offer in terms of new mechanics and the story isn’t really strong enough to carry the game.

I would have liked more side challenges and things to explore while not in the levels. However the game is alright and despite the lack of variety if it hooks you, there are plenty of levels to enjoy along with a multiplayer and endless mode.

While it’s not the most complicated game out there, Half Minute Hero the Second Coming is a great sequel that keeps the frantic action going.