Tomorrow Corporation along with 2D Boy are the creators behind some very interesting games that combine gameplay, aesthetic and storytelling into something else. Their previous games World of Goo and Little Inferno were interesting puzzle games and Human Resource Machine takes things a step further, by combining assembly language programming with office life.

The story of Human Resource Machine is that you are working for a company that takes inputs in and send outputs out. Starting at the lowest floor, each stage tasks you to complete a specific task by outputting the correct results. Aiding you are commands that more are unlocked as the game goes on. These commands allow you to alter, check and input or output values.

If this all sounds like programming, it pretty much is. Similar to TIS-100 from Zachtronics, Human Resource Machine is about teaching you the fundamentals of programming and programming logic; all wrapped up in the Tomorrow Corporation’s aesthetic and storytelling. Despite your job, you’ll soon find that there is a haunting story going on behind the scenes.

Where the two games differ is at the layer of abstraction. TIS-100 was literally you typing in programming language to perform tasks within the confines of a machine. 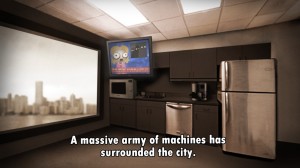 As with previous games, expect a dark mysterious story hidden under the aesthetics

Human Resource Machine removes the computer element of programming and breaks it down into simple verbs.

So while you’re not using for loops and complex math, the game abstracts that down so that anyone can solve the puzzles without needing to read code. Adding more challenge is the fact that every stage has two optional objectives, tasking you to solve it under the parameters of time and how many commands your program has.

Human Resource Machine is an interesting game, especially following in the footsteps of TIS-100, and that makes it hard for me to criticize.

Learning on the Job:

Human Resource Machine is simpler compared to TIS-100 thanks to its use of verbs, but it does struggle a little bit in showing how things work. At the start, the stages are easy enough that anyone with or without a programming background can solve them. As time goes on, things get a lot more complicated and the game’s use of verbs for commands comes back to bite it.

Later stages challenge you to solve increasingly harder tasks and the limited utility of your commands can make things harder. There were some puzzles that I knew how to solve them from a programming point of view, but I had no idea what to do within the constraints of the verbs. Similar to TIS-100, there are no hints for you to use; if you can’t figure out a solution, then you are basically stuck. 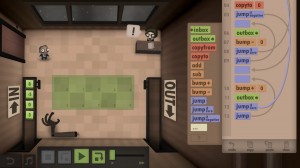 Unlike TIS-100 that keeps everything to one screen with the different nodes showing code, Human Resource Machine sticks to one very long command list on the right-hand side of the screen; that becomes more and more unruly as you get further into the game.

With that said, this is an even better first introduction to programming than TIS-100 thanks to the abstracted verbs in place of actual code.

For fans of puzzle games or even parents looking for a great first step into programming for their kids, Human Resource Machine is a great building block towards the thinking around programming. And then after they finish with this, TIS-100 makes a great middle step.

For more on both games, you can watch my spotlight videos on Human Resource Machine and TIS-100