Hyper Light Drifter by Heart Machine comes close to being one of the all around amazing games released in 2016. Featuring gameplay that feels like a 16-bit version of Devil May Cry, if it wasn’t for a few design choices, this could have easily been in my top 10 of 2016.

The End and Beginning of the World:

Let’s get the big praise out of the way: Hyper Light Drifter looks amazing. The handcrafted animations and aesthetics are some of the most beautiful things I’ve seen in 2016. The game’s opening cinematic is a mixture of beauty, wonder, confusion and bad-ass-ness. The soundtrack is fantastic and delivers subtle cues and big moments when it needs to.

You play the Drifter, who appears to be at the end of the world. After some confusing imagery, you awaken in the far future after the destruction of the last world. Your only guide is to access four mysterious pillars at different corners of the area. 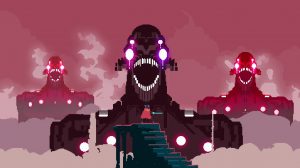 As you can tell by the screenshots, Hyper Light Drifter goes all-in for mystery. All narration is told through pictures and there is no dialogue in the game.

While people have compared this to the Legend of Zelda, I find that the combat and flow is more out of Devil May Cry in some areas.

Combat in Hyper Light Drifter is very fast-paced. You will be put into encounters with anywhere from two or three enemies, up to six or more. You only have a few milliseconds of invincibility after taking damage, and you can quickly run out of health.

You start off with a gun, your sword and the ability to dash. Dashing is your main form of defense and getting around the areas. Because enemies cannot be stunned by attacking, combat is about getting a few hits and dashing away from the counter strike.

Your character can hold up to three med kits that can be found throughout the areas. Run out, and you’ll have to find more in order to recover your health. 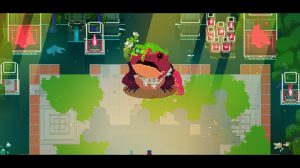 Combat between groups and bosses will test you

The different enemies of the world come in varying types of range, offense and health. At the end of each area is a powerful boss that you need to take out to move on.

Besides combat, Hyper Light Drifter has a major exploration focus that its progression is built on.

You are free to choose whatever upgrades you want, but the bomb and dash are the two most popular at the start. Besides that, you’ll need to explore each area in order to access the boss. There are eight hidden nodes in each area that unlock additional routes as you find them.

You’ll also receive new weapons after killing the bosses to further add to your moveset. The game’s simple structure is elevated thanks to the amazing backgrounds and areas you’ll visit.

With all that said, there are a few issues that causes Hyper Light Drifter to falter in my opinion.

Stumble out of the Gates:

Hyper Light Drifter combat has one major element against the player. After you perform your three-hit combo or a dash, there is a noticeable and explicit delay before you can do another action.

With your combo, it’s supposed to condition the player to go for two-hits and then a quick delay. If your time your button press correctly, it is possible to dash after completing the previous dash. While these elements were designed to make the game more challenging, they feel like arbitrary conditions and unnecessary balls to juggle in the heat of combat. 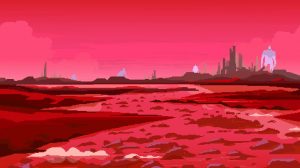 Did I mention how great this game looks

You are already processing a lot between avoiding damage and the various attack patterns of the enemies. Having the delay adds more frustration than it does challenge.

Speaking of frustration, this becomes worse by the amount of back tracking that you need to do. The games nodes and bits are hidden in various places.

It can be annoying to miss one of the nodes on your way through the area and then have to go back while fighting all the same encounters again.

The game’s difficulty when it comes to combat feels inconsistent outside of boss fights. There are some encounters I ran into where earlier encounters in an area felt easier compared to ones later in.

The difficulty also comes in by the fact that recovering med kits is dependent on finding them in the area. Get to a boss fight without any kits, and you’re going to have a disadvantage.

Lastly, the game is on the short side; taking me just over four hours to get through, but not finding everything.

Hyper Light Drifter comes close to being all out amazing. Even with my issues with the control delay, the visual design and soundtrack are strong motivators to keep you playing and exploring. While it may have more questions than answers, this is still a gameplay and visual treat.

If you want to see the game in action, here is my video spotlight:

The Balancing Act of Randomness in Competitive Game Design