The King’s Bounty series has been a favorite of mine over the last few years — Combining RPG and tactical gameplay into one title giving the series a unique feel. With the release of King’s Bounty: Warriors of the North, we are up to the third in the series

However, with this latest game, the series flaws have become more apparent, along with the age of the design.

For those who aren’t familiar with the King’s Bounty system I want to start with a brief primer to catch everyone up. The series is part RPG with tactical strategy combat.

At the start you pick your class from three different templates with their basic definition is: warrior, paladin or mage. Your class determines what your overall strategy is going to be for playing the game along with what you are awarded with on level up.

Warriors field the largest armies and can use rage (accumulated from fighting) the most to cast special abilities. Mages field the lowest # of troops but cast the strongest spells, while paladins are the middle of the two and is a jack of all trades type class.

Regardless of your class, you have three talent trees that require runes for you to unlock talents. The runes themselves correspond to the three classes and are awarded for leveling up and can be found while exploring. Talents are game changers and can do everything from allowing you more troops, to making combat easier.

Each class has two specific talents for their tree that only they can unlock; these are usually at the bottom of the tree and have big effects on combat. For instance, the mage can get a talent that allows them to cast two spells per round of combat instead of just one.

As you explore the world, you yourself will not take part in combat directly, but instead make use of your army. There is a wide variety of combat units available: from wizards, zombies, bears and many more. Based on your leadership stat, you can take a certain number of each type into battle. Now, regardless of how many you have, that particular unit will be represented by one character during combat. 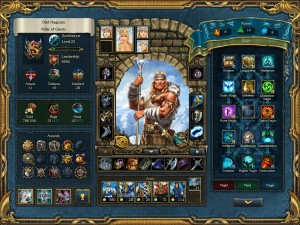 Your path down each talent tree will greatly impact your strategy during combat.

IE: If you have an army of 1000 archers that will be represented by one archer on the tactical map.

This is an important detail about the KB world, as quality vs. quantity plays a big deal in strategy.

A unit that only does 2-3 points of damage doesn’t sound that good, but if your army had 3400 of them, that’s a different story.

What makes the KB series so fascinating to play, is how well connected the RPG and exploration elements are to the combat. Creating a personalized army and strategy and going out into the world is a great feeling. However, we’re up to the third time doing this and the cracks are starting to show.

The problems with Warriors of the North definitely feel like stagnant design at this point. First is that the game starts off very slow, both due to quests and unit variety.

In the first KB, the player had an entire continent to explore with a huge variety of units to build their army from. Adding to that, every store had their inventory randomized to give the player variety with each new game.

But starting with the second game, now you explore a chain of small islands which lacks the great pacing set by the first game. To make things worse with Warrior of the North, the first several hours of the game only allows the player to largely recruit from the Viking race.

You won’t see more variety until several hours in, which is a huge change from previous KB titles. With Warriors of the North, the plot is that you must stop the undead from invading and taking over. This means that you’ll be fighting a lot of undead armies, reducing the variety of combat strategies.

Now combat in the KB universe is a big deal and part of the difficulty of the game is due to the uneven distribution of enemy armies. In the first KB, the designers did a good enough job of gradually raising the threat levels of the armies in each area. There were always one or two extra hard armies guarding treasure in each area for the player to return to.

But starting with the second one, the distribution has become more uneven. You may enter an area and the first enemy meeting you would be several times stronger than the hardest enemy in the previous one. 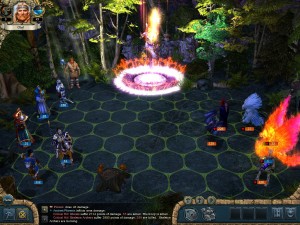 Valkyries represent the main use for rage in Warriors of the North and have a variety of effects during battle.

Part of the problem with discussing difficulty is that there are several big factors that determine how hard a particular fight is.

First is that since unit recruits are random, it’s hard to know what units you’ll have access to at any given point, along with equipment or spells.

Then there is how the player distributed runes to the various talents, which has a huge effect on potential strategies.

In the first KB, the designers were able to avoid these issues due to the size of the areas, allowing the player to find plenty of shops, enemy armies and items to equip. But with smaller maps it makes it that much of a crap-shoot unless the player gets lucky with finding great items and units.

The final problem with Warriors of the North is quite frankly, the series appears to be stalled. With three games and one mini expansion, the series is still using the same engine and gameplay. While the names of the classes have changed, you’re still picking from the same strategies. While a few new units have been added, the bulk of the recruited units are the same.

I’ve been using the same strategy as a mage now, for all three games and it’s still as game breakingly powerful as it was in King’s Bounty: the Legend. When I can fight armies that are considered invincible and come out winning every time, there is a problem.

And as a mage I really didn’t have a choice not to use these tactics, as the mage’s army size is too small to get into direct combat with similar units, especially with how the balance of the game has gotten after the first one.

For people new to the KB series, I would recommend playing the first one: King’s Bounty: The Legend first and selecting either the warrior or paladin class as your starting character. That way you’ll be able to enjoy the game’s tactical side the best while still having the option to use a variety of spells.

As for current fans, Warriors of the North is just a third helping of the same game and if you aren’t tired of the taste, you’ll have some fun. But for people wanting something new, hopefully the developers are working on the next evolution of the series.