When Nintendo originally unveiled the Nintendo DS, many critics scoffed at the functionality that two screens and more specifically touch screens would bring to the handheld market. To win them over, Nintendo needed a hit and they got one with Kirby Canvas Curse which remains one of the best games from the Kirby brand and one of the best uses of the touch screen on the DS. Now the series has moved onto the Wii-U with Kirby and the Rainbow Curse, featuring a brand new art style which unfortunately doesn’t cover up the downgrade in the gameplay department.

The story is that one day all the color in dream land is stolen by a creature called Claycia; it’s up to Kirby to roll his way to victory. Gameplay remains almost note from note from Canvas Curse. Kirby is in ball form and can be moved along by tapping him. Using the stylus, you can draw paths that Kirby will follow and can be used to block enemies. The amount that you can draw is limited and Kirby will need to land on solid ground in order to replenish it.

Additions come in the form of Kirby transforming into vehicles as well as turning into a giant bullet if the player collects 100 stars. Stars are also used as a scoring system and the player will be rewarded medals based on how many stars they collect. The main difference between Rainbow and Canvas is that here, Kirby won’t absorb enemy powers to alter his moveset.

Aesthetically speaking, I love the Claymation style but I know that some people may not like the striking aesthetic. Little touches like how characters animate to even the menu UI and figurines are all clay based are great. Bonus features include finding soundtracks, figurines and more and the game has partial Amiibo use. Using Kirby, King Dedede or Meta Knight Amiibos will let you play as an augmented Kirby for one stage once a day so it’s not a huge deal breaker.

The levels themselves are set to different worlds which in turn affect the challenges and environmental obstacles with each world ending with a boss fight. Like most Kirby titles, Rainbow Curse’s main path is designed for younger audiences with plenty of guide markers, lives and health to keep players going. But also like other Kirby games, there is a hardcore side to test the best players for game completion.

Similar to the Mario series, Kirby’s level design is all about providing two unique experiences — one for younger or less skilled players and one for the advanced players to sink their teeth into.  And to facilitate that, the designers have bonus objectives in the form of treasure chests. These chests unlock the figurines and songs mentioned above and are always hidden in harder to reach or hidden areas. 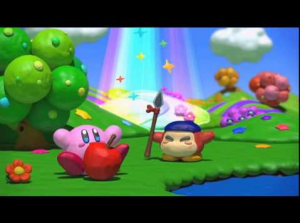 This provides rewards for players as well as a test to challenge people beyond just playing through each level.

However, I feel that the way it was implemented hurts teaching the player and growing their skill set.

Just like with Canvas Curse, Kirby and the Rainbow Curse teases additional items to challenge players to go after them. The big difference and the one that I think hurts the game overall is that none of the collectibles are tied to game progression. In Canvas Curse, part of the challenge of the game was that it forced you to improve your skills to see the end and while you didn’t need to find every medal, you still had to go after them to see the final fight.

And while having collectibles be rewards for players like me, I would have preferred them tied to game completion a little more as a way to connect novice and advanced players similar to Mario. In the 3D Mario games, the stars and other collectibles acted as a means of progression which meant having rewards in the form of new content.

This was a good motivator to get people to improve their skills at the game and become better at it as it was the only way to see all the content. The other advantage of this philosophy was that it gave the developers a guarantee that the later levels should push the players further by virtue that only people who fully understood the mechanics would every see them.

The same can be said of Mario’s design and how the early levels afforded paths for both novice and expert players based on their understanding. By the end of the game, there was only one path as the developers were working with the knowledge that only expert players would reach this point and that the game should be a worthy test.

But in Rainbow Curse’s case, someone can just go through the game as quickly possible using the most basic understanding of the game and not feel the need to improve themselves at the game. While it may slow down the progression by tying objectives this way, it leads to an overall more fulfilling experience to give gamers a reason and reward for getting better at the game.

The levels feel very flat with very little growth between the worlds with exception to an environmental twist. What’s shocking is that the game actually repeats its boss fights instead of having new ones to add some much needed variety. The final world does provide some interesting challenges but it comes too little, too late to make a difference. 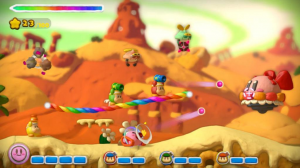 Co-op and vehicle stages are a nice touch, but the lack of the Rainbow Run mode is troubling

The challenge rooms are very frustrating thanks to the time limit and general unresponsiveness of Kirby and don’t come anywhere near as interesting as the Rainbow Run challenge modes from Canvas Curse.

Too much of Kirby and the Rainbow Curse’s experience is aimed at novice players without giving them a reason and means to improve and this feeds into the level design which lacks either the multiple paths through like in Mario or the variety of challenges seen in Donkey Kong Country Tropical Freeze.

In the end, Kirby and the Rainbow Curse isn’t a bad game by any means and is another good title for the Wii-U but it’s disappointing that a DS game; a platform launch and defining DS game no less, managed to be more interesting and varied than its console counterpart/sequel. And to prove that, I replayed Canvas Curse after Rainbow and the original still holds up and beats it in terms of controls, gameplay and level design.

Some of the best games from Nintendo are those that find that balance between casual and expert players by providing a bridge to mastery. While Donkey Kong Tropical Freeze was one of my favorite games of 2014, it did lean very hard on the expert side which is the opposite problem of Kirby and the Rainbow Curse. Here, too much of the game is focused on the casual audience without providing that hook to keep playing and growing.

And I know that the designers can do gameplay for multiple skill groups and ages having looked at previous Kirby games and very much case in point Canvas Curse. The Wii-U is still digging itself out of the hole of being perceived simply as a casual machine by hardcore gamers and I’m afraid that most people won’t want to go the extra mile here.