Little Nightmares is a game all about style: A disturbingly haunting style. Billed as part puzzle platformer and part horror game, the title unfortunately doesn’t seem to know how to make the gameplay as engaging as the aesthetics.

The story follows a girl named Six who is held captive on a massive ship along with other children. One day she decides to try and escape, and what follows is a hauntingly beautiful adventure.

The aesthetics of Little Nightmares are some of the best surreal imagery I’ve seen in awhile. The game looks like something out of a Tim Burton animated movie — complete with some effective nightmare fuel for the adult characters.

The gameplay is essentially split into stealth/horror segments where you’ll avoid being detected, and the puzzle platforming.

As an interesting touch, the game makes use of a dynamic tutorial system that will only break in with instruction if you’re stuck. 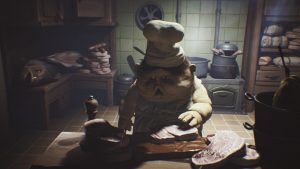 The aesthetics and character designs are amazing

As Six, you can run, climb, jump, and carry one object at a time. The puzzles themselves are pretty basic and involve figuring out how to get out of a room. The design is linear, with each puzzle having a set solution. Where the game gets interesting is with the introduction of the enemies.

At set points throughout the game’s chapter, Six will encounter the denizens of the ship who all want to get her. Each of the game’s three major enemies will engage the player in a different way. If Six is caught at any time, you will be sent back to the nearest checkpoint. The challenge comes in when the player has to complete a task or solve a basic puzzle while avoiding detection.

The enemy AI is simple, and as long as you can get into a hiding spot, they won’t cause too much trouble. The best parts of the game are when the player is actively being chased or doing those stealth puzzle sections.

Unfortunately, the rest of the game isn’t as exciting and gets in the way… in more ways than one.

Little Nightmares tends to go into frustrating territories when the game strays from the stealth horror design. First issue is that the camera does not give the best angle for gauging depth in terms of Six’s proximity to hazards, gaps, and safe spots. Most of my deaths came from not being able to accurately measure the right distance in terms of leaping over a gap.

Puzzles fall into the same concept of having to figure out how to get Six over or through an obstacle. Mostly, this comes down to climbing or moving heavy objects very slowly around. The mechanics simply don’t have enough to them to make the various situations interesting or challenging.

There are several parts where Six is actively chased and has to do platforming to avoid her pursuers which is a nice break. Speaking of being chased, if you’re hoping for interesting behavior from the enemies, then prepare to be disappointed. 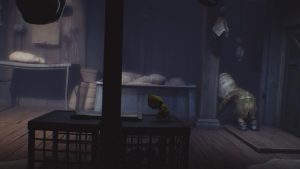 Every enemy in the game is built around a basic AI and is more like a simple obstacle instead of a creditable threat. Without spoiling things, the game does mix it up with “boss battles” where you’ll have to figure out how to disable an enemy.

Unfortunately, only two of the five enemy types end this way, which is a shame, because the game is on the short side — taking me about two hours to beat on a blind run.

Little Nightmares is definitely not the best horror game I’ve played, but it certainly has style over substance. Ultimately, this is a world that I would love to see more of with expanded gameplay. If you’re looking for a quick peek into one demented world, then give this one a look.