The news this week that Oculus Rift developer: Oculus VR was bought by Facebook, has certainly shocked a lot of people. I had to break it to Ken gently who was floored by it. But the thought of a social focused virtual reality program reminded me of a very unique game for the 3D0 that I’ve wanted to talk about for some time — Immercenary.

Immercenary was a first person shooter developed during what we can probably call “The Before Time”, where FPS titles weren’t that known on the console market much less on 3D0. The story was that in the future, a virtual reality online world was released that took over the lives of everyone, trapping them in a virtual existence.

In which they lived online while their real bodies died due to lack of nutrition or if they were killed in the world. The player belongs to a group in the present who have the technology to send someone into the virtual program in the future and try to destroy it to free everyone (Remember, this was also before strong narrative became important.)

Despite the era it was made, Immercenary was designed pretty differently from other games. The rules of the world were that every character was ranked in terms of power level with one being the ruler of the world and the player starting at 255. Killing enemies would leave their data behind, allowing you to run into it and absorb it, becoming stronger in the process. 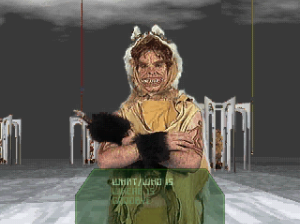 Each time you killed a higher ranked character, you would also rise in rank. You had three attributes that dictated health, ammo supply and your ability to run.

These stats would grow based on the type of enemies you killed and absorbed. The game also had a bit of a rogue-like element to it by the fact that if you left the world to save outside of a safe zone or are defeated, you would lose some of your stats.

To add more progression, there were ten boss characters that you had to kill which would allow you to raise your rank past some arbitrary walls. Weapons and items could be found in the world which was a decent size at the time, but not randomly generated.

The controls also have to be mentioned as the developers did some interesting to get around the controller’s inherent problems with first person combat. Movement was more like a flight simulator where you controlled the character’s speed and then they move on their own and there was no need for adjusting the camera as everything was flat.

Immercenary was a decent idea at the time and it was somewhat poignant as this was the period where virtual reality first started to make waves and many people were thinking that early VR was going to be the future (see also The Lawnmower Man.) But what may be the main thing that people remember Immercenary for is the classic 90s live action segments.

The safe zone in the middle of the world is not only where you can recover but also talk to the people of the world. And when there is a storm going on or just randomly, you may find the ten bosses socializing. So while the other programs are just digital characters, they got actors to play the boss programs which you can talk to through dialogue options. So the game has at least a hokey charm there. 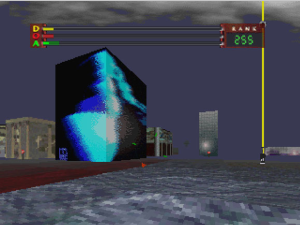 Despite the basic gameplay and graphics, Immercenary did have some interesting ideas with the rogue-like trappings.

The big problem with Immercenary was despite being a play off of the word immersion, there really wasn’t much there.

Due to the safe zone’s usefulness, you could pretty much hang out right outside of it taking out characters and then quickly healing whenever you wanted.

This in turn circumvented the need for exploring the world hunting for characters. You also only needed one upgraded weapon to be able to take on the bosses, rendering the rest of your inventory useless.

Despite the different bosses, there was only one strategy you needed: Mash the attack button until you run out of ammo or they were killed. But I remember the game with some nostalgia and as mentioned, it had a pretty different concept for the time.

Like most games of the 90s, the developers hinted at the prospect of a sequel in the ending, which never came to past. And I believe the developers did fold after the game was release.

With Facebook now owning the Oculus Rift, I’m not saying that it’s going to lead to the end of the world, but if we all become stuck inside an evil virtual social world, then I just want to be on record saying that I called it now.