One of the most shocking surprises of E3 2017 was the collaboration by Ubisoft and Nintendo for Mario + Rabbids Kingdom Battle. Taking the well loved mascot and pairing him with Ubi’s attempt at a mascot, and on top of that, having tactical battles like in XCOM. With the game out, we have a game that shouldn’t work, and yet may be one of the best games to introduce new players to the design of XCOM.

If you’re expecting a deep story to explain why this is happening, you’re playing the wrong game. After the Rabbids break into a young scientist’s lab with their time traveling washer (I don’t know any more about it than you do) who is a huge Nintendo fan, they mess with her device that combines objects and find themselves transported into the Mushroom Kingdom. With our world and the Rabbids combining with Mario’s, it’s up to him and his team to fix everything.

The game is structured around four worlds with each chapter broken up into a set of fights. Outside of the battles, you’ll explore the paths looking for coins and new gear for your characters. While the overworld is focused on light puzzle solving, it’s the tactical combat that really sells the game.

Mario + Rabbids Kingdom Battle will feel right at home for anyone who enjoys a good X-Com experience. With that said, Ubisoft did not design this game around high difficulty and RNG. You will never have to worry about having Mario get killed due to a lucky crit from the enemy. 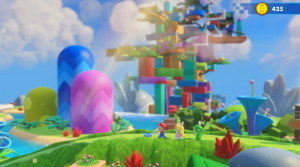 The aesthetics are well done and pretty surreal

The basic rules should be straightforward to everyone. All characters that are not in cover or being flanked will have a 100% chance of being hit. Characters protected by cover have that chance dropped to 50%, but missed shots will always damage (and eventually break) cover.

Each character in the game comes with their own weapons, stats, and skill trees to power up. As a long time fan of Nintendo and XCOM, I got a child-like glee of seeing the Mario Brothers setting up overwatch to take down enemies.

The stages themselves offer an easy mode for younger players, as well as conditions for expert players that reward more coins. Coins are used to buy unlocked gear at the battle lab in-between stages. While the battles do take place in fixed locations, the Ubisoft team made sure that the enemies will not perform the same actions each time you play.

What really separates the game from other tactical strategy titles is a focus on offense; thanks to the increased mobility the game has.

Unlike other tactical strategy games, Mario + Rabbids Kingdom Battle has a huge emphasis on movement. Every character in the game has a large movement radius to begin with, and during their move, they can run into an enemy to perform a dash attack.

Taking things further, characters can use their teammates as springboards for even more movement, and allowing them to clear gaps or jump to higher elevation. Outside of special effects, there is no way to lock down anyone in this game. This is a game where you can get a flank on an enemy to only have them dash into you, take a pipe to another area of the map, get a flanking shot on you, and this is all in one turn. 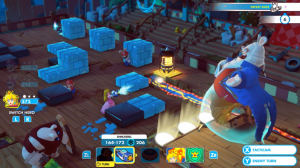 This creates a dynamic of making the game focused more on offense as opposed to defense. Due to how easy it is for characters to get around, it’s always better to focus enemies down than try to get your characters into defensive positions.

I also like how the game mixes things up with different tactical battles and the midboss and boss battles of each world. With that said, there are a few odd elements of the design that come back to hurt the game.

Mario + Rabbids Kingdom Battle is certainly an interesting mix of franchises and design. For the most part, I think the design holds up well, but if you’re expecting a deep tactical game to sink your teeth into, you’re not going to find it here.

The first big point is how progress works. As we’ve talked about, coins are used to buy new gear for each character. As the game goes on, you’ll unlock higher level variants of each character’s starting gear. The problem is that the cost is so high that it becomes impossible to power everyone up evenly.

The game is balanced by increasing the health of the enemies as you get further in, and this makes those weapon upgrades vital to succeeding. Anyone who has played a tactical game knows that the difference between a one or two-shot kill is huge.

To get more coins, the game allows you to replay previous stages, but you’re using your powered up characters in the process. This just creates grinding where there doesn’t need to be, because you still have to unlock the new weapons before you can buy them; just remove the purchasing option.

From the previous section, tactical fans may not like how uncontrollable is it to play the game. Not helping matters is the UI, which I feel could have been improved in some areas. There is a secondary screen that provides more information on enemies including their movement ranges, but I would have preferred having that information always available. 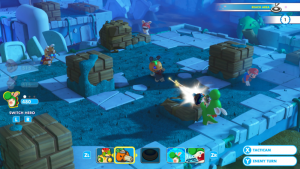 The focus on offense does limit your tactical options

Once you start running into enemies with their overwatch attack, the game does not make it easy to tell what enemies are in overwatch, or what their line of sight is.

Perhaps most surprising of all is that for a game aimed at new players, there is no action undo option, and it can be very easy to move a character where you don’t want them.

Another nitpick is that team creation is limited. Your team can only have three characters and one of them must be a rabbid and the other Mario.

I still can’t believe that not only did we get a pretty good tactical strategy game on the Switch, but that it combined Mario and the Rabbids to great effect. Not quite XCOM 3, or “Baby’s first XCOM,” but if you’re looking for something to scratch that tactical strategy itch, definitely check this one out.

THOUGHTS ON
“Mario + Rabbids Kingdom Battle is an Unexpected Treat”