Moon Hunters is the latest game from Kitfox Games, whose previous game Shattered Planet was a good, although simple, rogue-like. This time, they are reaching for the stars (pun intended) with a high concept action/adventure game built around replayability, I just wished the gameplay was as unique as the story.

The story of Moon Hunters takes place  in a strange land where the cults of the moon and sun are fighting each other. You find out one day that the moon has disappeared and the cult of the sun has branded you for death in five days. Each character belongs to different tribes (that you can select at the start,) as well as being completely different classes that determine how they play out over the course of a play.

A single play of Moon Hunters occurs over the five day period, where you’ll explore the land to make your mark and ultimately decide the fate of the world. Each day gives you the chance to explore one hot spot full of enemies and items. You may also go to any villages and talk to the townsfolk there.

Making decisions will impact your personalty and affect your character’s personal story, along with providing upgrades to certain attributes. During combat, defeated enemies will sometimes drop opals that can be sold for upgrades. Sometimes you’ll fight bosses and discover hints and story lines to fill in the blanks about the world around you.

At the end of each day, you’ll have the chance to camp and perform a task of your choosing to upgrade your stats further before starting the next day. At the end of the five day period, your character’s actions and choices will be remembered by the people; leading to Moon Hunter’s interesting progression model.

Instead of going for a grand campaign or lengthy playthrough, Moon Hunters is about short, replayable  plays. At the end of the five days, the game ends, and all your actions will be processed and the game will unlock new content for you via the constellation system. For each new constellation that shows up, unlocks some kind of new content; be it costumes, new environments, characters and so on. 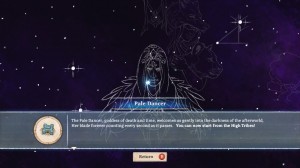 This is the perfect example of “trophy room” achievement design: Giving the player a representation of their achievements and progress in the game. Moon Hunters is all about you replaying the game with different characters to see more of the story and make the game bigger in the process.

This kind of high concept take on story and replayability is something we normally don’t see all that much from the action/adventure genre and gives Moon Hunters a different feel to it.

As you play, you’ll unlock personality statuses that will give your character an end of cycle story epilogue. While all this sounds amazing, the problem that I have with the game is a common one when story and mechanics clash.

One of the hardest things to do when it comes to game design is when you have to balance a high concept or unique system with the basic foundation of your mechanics. It’s very rare to see a game get both mechanics and storytelling 100% on the same page, and Moon Hunters is sadly not one of those games.

When you have a game that’s meant to be very replayable, the basic systems have to be engaging enough to make you want to keep playing, with the achievement and progression as the icing on the cake. We can see this in the Binding of Isaac and how the core gameplay and variety of situations by itself was great, and the achievement system puts it over the top.

The problem with Moon Hunters is that for the interesting storyline and unlockable system, the base mechanics simply don’t reach the same heights for several reasons. The first is that the game was built around co-op (with both local and online options.) Since you have multiple characters, each character has to be built from a basic foundation.

Even though everyone has different abilities, the basic gameplay never grows or evolves; you’re not going to find any game-changing upgrades. Given the five day playthrough cycle, it would have been interesting to have that factor into the character’s Meta; allowing the player to impact things on the next cycle. 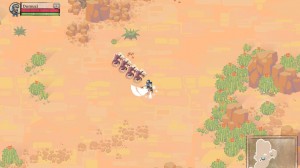 The moment to moment gameplay is just too basic, and the simply enemy designs and level structure don’t help matters

This kind of basic gameplay also extends into the enemy and level designs. Enemies fall into the “charge the player above all else” kind; being really easy for ranged characters and punishing for melee when the enemies can’t be stunned or knocked back.

I like how there are hidden bosses to find and defeat, but you only get one chance per playthrough to fight them.

The levels were designed around wide open areas that points of interests could be placed into.

Unfortunately this makes them very barren other times and you’ll find yourself just running through waiting for things to happen. As with the Binding of Isaac, you do unlock new environments and enemies over time, but the lack of interesting situations really hurts.

Spirit in the Sky:

Moon Hunters does a good job of telling an interesting story and building it on a unique world, but the gameplay simply doesn’t have the same level of creativity. Despite still having a lot of constallations to unlock, I don’t see myself returning to the game the same way I did with The Binding of Isaac.

Creating a game that’s meant to be replayed can be difficult, there needs to be enough reasons to keep coming back for more, and I don’t think Moon Hunters has it.

For more on the game, you can watch the video spotlight of it on the Game-Wisdom Youtube Channel.

If you enjoyed the post, please check out the Game-Wisdom Patreon Campaign. Your donations will help to keep the site going, and  can help bring back a popular feature.

The Joy of Indie Development with Metanet Software