The Mummy remake earlier in 2017 came and went pretty fast for moviegoers. I’m sure if it did well enough we would have seen a full AAA game based on the movie. Instead, Wayforward was handed part of the license to create a metroidvania. While the game fortunately isn’t as bad as the movie, it’s just as forgettable.

The story of the Mummy Demastered loosely follows the movie…minus any and all mention or likenesses of the stars in it. You play a random agent for the organization that Dr. Jekyll ran who gets sent out to fight the mummy.

From an aesthetics point of view, the game features amazing 2D art and a great soundtrack. You are able to equip two sub weapons along with grenades as you find them in the world. There are four main upgrades that give you abilities to move through the environment better, along with several bosses.

There’s not a lot to the Mummy Demastered except for its death mechanic which we’ll talk about later. What’s missing from the game is more interesting than the game itself.

Metroidvania design requires a lot of skill to pull off right and is very easy to mess up. With the Mummy Demastered, this is quite frankly one of the worst examples I’ve seen this year. The level design is very haphazard, with a common theme of having long vertical corridors with multiple entry points. Get knocked off a platform or miss a jump and you’ll have to repeat several rooms to get back to where you were. 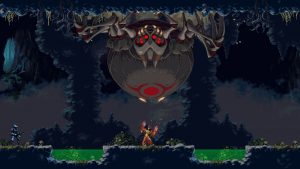 The game takes some liberties with the source material

Speaking of level design, the level environments seemed to be all over the map. The environments feel all bunched together without any rhyme or reason. Enemies will get harder as you play, with many of the later enemies moving into older areas.

Too many of the upgrades you find are of the stat variety: More health, more ammo. The world itself is so basic that it didn’t make me motivated to keep exploring. The upgrades you do get are very weird in their use. You get higher jumping, increased running, hanging onto ceilings and being able to go underwater.

None of the upgrades really changed how you played, and there were still plenty of areas where my higher jump didn’t allow me to keep going. There were also 50 collectibles to find hidden all over the place, but without any in-game reward, I stopped caring pretty fast.

The bosses are of the pattern variety and require way too many shots to kill. With just about every ammo upgrade found, I went completely through two sub weapons, all my grenades, and still to spend 3 minutes shooting the final boss with my basic weapon.

The one lone thing that the Mummy Demastered does different is quite possibly the worst part of the game.

The Mummy Demastered plays out like your usual metroidvania game until you die. After your agent is killed, they are brought back to life as a zombie while you assume the role of another nameless agent. In order to get your gear back, you have to kill your former character similar to Zombi-U. The idea sounds good on paper, except for one thing, the zombie has all your upgrades and weapons at its disposal. 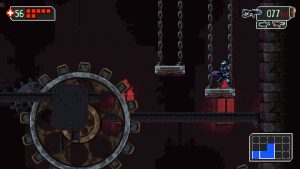 The level design is recycled in a lot of areas

When you’re brought back, you lose all the ammo and health upgrades you found as well. If you die near the end of the game when you are at your strongest, it pretty much breaks the game.

How are you supposed to kill something with all your best weapons, eight to nine times the health pool, and fight your way to it?

And of course the kicker is that if you die again, then that agent becomes a zombie holding whatever weapons you had on him. It leads to a downward spiral that makes no sense.

Another point is that you can refill your ammo for free at weapon stations, but your health can only be recovered by killing enemies and destroying objects. It adds an unnecessary grinding element to a game that only serves to make it frustrating to play, not challenging.

This part of the game completely mystifies me as to why it was included. It’s obviously an attempt at Dark Souls-styled play, but not only does it miss the point, but the game was not designed to have such a system in place.

The Mummy Demastered is a confusing game from a brand and design point of view. I almost feel that the game was originally designed to be something else, and that the Mummy license was added at some point into development to try and get more awareness.

There are just too many parts that don’t make sense in terms of design; including several areas in-game that were just there without purpose.

I think I’ve written more than the game actually deserves at this point. The Mummy Demastered sadly follows the same path as other movie licensed games despite feeling completely different from the movie.

THOUGHTS ON
“The Mummy Demastered is as Forgettable as the Movie”