Mushroom 11 has been a long time coming from Untame: Originally pitched at a game jam, the game is finally out and delivers on a very unique design. Unfortunately, unique design doesn’t always go far and Mushroom 11 does everything it can to stretch it out.

The game takes place sometime in the future, where humanity is gone and only insects and strange plant life remain. You play as a mysterious sentient green mushroom, with your only goal to explore the now destroyed planet. Controlling the mushroom is very different compared to any other game around.

Using either the left or right mouse button, you’ll create an erase zone that will destroy any parts of the mushroom it touches. Any parts that are destroyed will immediately reform on the mushroom and the mushroom will grow and push out as you erase parts of it. In turn, the growth actually pushes the mushroom and is how you maneuver around. 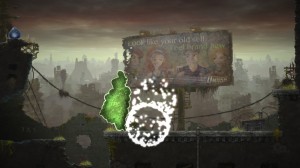 Instead of direct control, you move the mushroom passively by destroying it

Death traps are set up all over the place and if your entire mushroom is destroyed, you’ll have to restart from the last checkpoint.

Mushroom 11 has collectibles in the form of the mutated flora and fauna that you can absorb into the mushroom, but there doesn’t seem to be any in game reward for doing so.

At the end of each chapter, you have to “fight” a boss using your mushroom.

From an aesthetic and design point of view, Mushroom 11 is one of the most unique games I’ve played in some time. Unfortunately, uniqueness comes at a cost.

Mushroom 11’s biggest selling point is also its main problem. You can only do so much with unique mechanics and games built around them are notoriously short; see Portal 1 and 2 as another example. Mushroom 11’s mechanic of controlling the mushroom is very limited in what you can do with it and the game becomes repetitive because of it.

Your interaction with the mushroom doesn’t change at all over the course of the game. Instead, the level designs and obstacles are presented differently to challenge you. Unfortunately, that still leaves you with the same option and solution for all puzzles.

Controlling the mushroom is cumbersome, but the game adds a few more wrinkles to it with how it grows. Many puzzles require you to shave off parts of your mushroom in order to have it stretch and contort in the way that you want it to grow. Unfortunately you have no means of telling or directing it to focus on one side or the other, forcing you into several minutes of play that can all end immediately and must be replayed if you screwed up.

The game was built for both mobile and PC devices in mind, hence the touch screen-like control scheme. That cross platform design is what hurts the game in my opinion as it would have been a lot more interesting to have a few more forms of interaction with the mushroom. 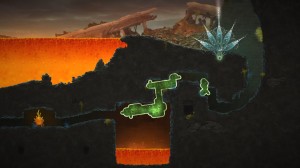 You will manipulate the mushroom in a variety of ways, but with only one form of interaction limits what you can do in-game

One of the understated joys of Portal was that the developers were able to keep presenting new challenges to the player despite only having the limited mechanic. Mushroom 11 however doesn’t go far before it starts repeating situations.

For instance, the first and second chapters both feature a section where you have to maneuver under a platform that’s suspended over lava. Both sections function the exact same ways and the only thing that’s getting in the player’s way is the time it will take to do it.

Due to how hard it is to make fine motions with the mushroom, I would have liked more checkpoints at some parts, as it feels like a few challenges are a little long in-between where you could save and not force the player to repeat the whole thing.

Mushroom 11 as I said is one of the most unique games around and you can tell that there was a lot of thought and passion put into bringing it to life. While it may not be a varied journey, it will certainly be one that you won’t forget about for some time. For more on Mushroom 11, you can watch my video spotlight I made going through chapter 1 and parts of chapter 2.