N++ — The Way of the Platformer

Metanet Software has been working on the N series for over a decade at this point. N combines skill-based platforming with the use of physics-guided momentum to test players on tricky platforming. N++ marks the first PC retail release. After speaking to Mare Sheppard earlier this year, I was excited to see how far they’ve taken their design.

There isn’t much story to the N series. You play a ninja who is hunting for gold. Standing in your way are crazy levels and varied enemies. Each level has the same basic flow: You must find the exit switch and get out without dying. Collecting gold refills your timer that persists over a set of five levels. Get through a set, and you’ll unlock the next one.

The joy of playing the N series comes down to the skill the game requires. The controls are finely tuned around physics-based movement. As you move, jump, fall etc, your velocity will be added to your actions.  Move fast enough and you can quickly ascend walls or do massive leaps from ramps. 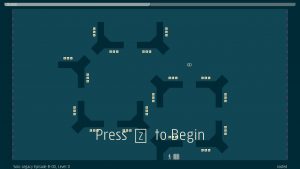 If you fall too fast, you’ll go splat on the ground unless you land on an incline. Enemies will try and stop you, and you cannot take any hits without dying and restarting.

While N++ is a simple game to play, Metanet has done a great job with their platforming design.

The beauty of N++ is how the game tests players on their platforming ability. Since its inception, N’s design has been about skill-based progression. You are only going to get far if you improve your mastery of N++.

Because of that, the level design does an amazing job of easing you in to the game and ramping it up. The gold timer may be a problem for new players, but it practically disappears once you get good at N++. Metanet knows how to build levels of varying skill levels.

Some levels are easy with tough gold placements; others are challenging tests with little gold and everything in-between.  Even though there aren’t a lot of enemy types, each one provides a unique challenge to the player. While it may hide it, N++ is a master class of platforming design. 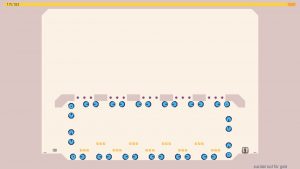 The game’s difficulty covers all skill levels quite well

You will get stuck at the harder levels (especially going for gold), but it’s all about rewarding those who can master the gameplay.

N has always been a streamlined experience, but N++ does have new features to spice things up.

N++ has expanded options both for single and multiplayer fans. For the first time, the game has Steamworks Integration for its level editor. As you’re reading this now, I’m sure players are creating deviously difficult levels waiting to be downloaded.

New themes allow you to change the color of the background and add some stylish flair to your platforming. Multiplayer options include co-op and race-styled gameplay with mode specific levels. The soundtrack has also been enhanced with new music from a variety of artists.

N++ is one of those games that puts everything out there for the player to see, and is a “what you see is what you get” kind of game.

If there was anything holding back the N series, it’s the kind of experience it provides. You’re not going to find an engaging story or varied situations with N++. The number of ways Metanet has provided diversity with their basic toolset is exceptional, but the game just lacks the “pop” of other platformers. 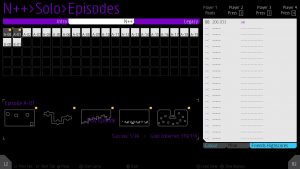 There are a lot of levels now, with the level editor sure to add more in time

When you play a game like Super Meat Boy or Mario, the level design continues to evolve with new elements and situations.

In return, the number of ways the game can challenge the player grows. In N++, the difficulty goes up, but nothing really changes to make the player think or do differently.

Because of that, it’s easy to burn out from extended plays of N++. This is always the tough sell for skill-focused games: There’s just nothing here to shoot for beyond player growth. Once you hit your limit and can’t get past a level, that’s basically it for your N++ journey. I know why Metanet designed the series this way, because it gives them a flat architecture for all skill levels to get into N++.

I would love to see them design maybe an “N+++.5” and try their hand at different kinds of levels. It doesn’t have to be a new gameplay mode, but something to spice up the already great gameplay.

The Way of the Ninja:

N++ is an amazing platformer with design finely tuned from years of work. While it may not offer much in terms of frills, this is a fantastic game for platforming fans. If there’s interest, I would be up for doing a Let’s Break series on N++.  In the meantime, please enjoy my video spotlight:

A Critical Thought on Breaking Games

A Critical Thought on Morality and Player Choice