Nuclear Throne: Stuck in a Loop

After several years in development, the rogue-like twin stick shooter Nuclear Throne is finally out. While it has been a long trip through early access, the game hasn’t changed all that much; leaving us with a game that tries to be two different genres and unfortunately doesn’t succeed at either in my opinion.

Race for the Throne:

The story of Nuclear Throne is that it’s the very far away future and the Earth is nothing but a radiated wasteland with mutants roaming the land. You play as a bunch of mutants who desire to reach the nuclear throne and thereby become the rulers of the world. At the start, you’ll choose your mutant from a selection of unlockables; each mutant has different starting stats, abilities and plays a little bit differently than the rest.

Despite the rogue-like tag, Nuclear Throne is more focused around action gameplay and progression; you’ll move from world to world in the same order every time. Each world has preset enemy types, environmental hazards and a boss. Kill all the enemies on a floor and you’ll move onto the next. You are very fragile and all it takes is one lapse in judgment to find yourself killed from the varying enemies.

Killing enemies and picking up rads will let you level up; letting you decide between one of several randomly selected mutations or passive effects for the remainder of your run. Each character also has one unique passive to them under the category of “Throne Butt,” which further alters their unique abilities. 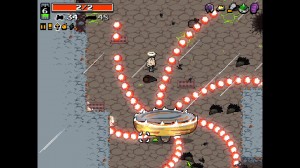 Combat is fast paced and plays like your standard twin stick shooter with randomly placed weapons that you can find. Weapons run the gambit from shotguns and pistols, to laser guns and rocket launchers.

Weapons are categorized by their ammo type and you’ll need to make sure to watch what weapons you pick up in relation to your ammo.

Get through the entire game and do something special at the final fight and the game will “loop:” Taking you back to the start with a new harder variant and the possibility of fighting new enemy types.

While the basics are here to rate  Nuclear Throne as  another great action/rogue-like mash up like The Binding of Isaac or Spelunky, it doesn’t quite work and the game’s attempt at balancing skill and abstraction doesn’t go anywhere.

Nuclear Throne is trying to serve two masters: It wants to be a skill-focused bullet hell twin stick shooter, but it also wants to deliver on the randomization and differing runs of a rogue-like. The problem is that the game doesn’t quite work on either genre and leaves me with an experience that is less than the sum of its parts.

From an action point of view, there aren’t enough differing weapons and strategies to really test the player on becoming better at the game; once you find two that you like and are powerful, you’ll go for them every time and render the rest of the choices moot. While there is skill involved in dodging attacks, you’ll find that the progression curve is very short in Nuclear Throne.

The worlds go through the same order every time with no change. There are hidden levels in the game, but they are also locked to only appearing at select points. This isn’t like The Binding of Isaac where there were variants and different situations that could pop up in every world. Nuclear Throne’s randomization is also lacking; with the only difference in levels is whether they are wide open spaces or narrow corridors. 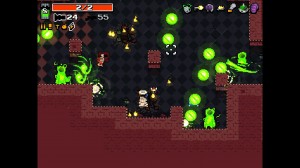 Unlucky floor generation will get you killed the most, with unlucky weapon drops following a close second

The level design also radically determines whether or not you have a chance at surviving. Many levels can spawn you in a wide open area with enemies on all sides able to get a shot off.

There is only so far you can go skill-wise in Nuclear Throne: The rest is about finding the weapons that you need and work with your build to pull off a win.

This part is where Nuclear Throne falls short of Spelunky, where player skill is the most important factor to have any shot at winning, and can make up for a lack of good items.

Speaking of a win, that takes me to my final problem and how Nuclear Throne’s main motivation to keep playing doesn’t work for me.

Nuclear Throne’s main bullet point that separates it from other action rogue-likes is how the game ends. There isn’t a set ending, but instead the game challenges you to see how far you can go in each loop of successive difficulty. This isn’t bad and prevents the player from truly having an ending in the game. However, this kind of progression doesn’t work to motivate someone to keep going in the same ways as other rogue-likes.

The developers have focused a lot on the balancing and design of the loop system, while leaving the first run alone for the most part. Given how easy it is to die and be unlucky with weapon drops, it’s going to be hard for a lot of players to reach their first loop reliably, much less their second or third. This gates a lot of the content that would change the game up and leaves the player forcing to keep dying and retrying to have any chance of seeing new content. 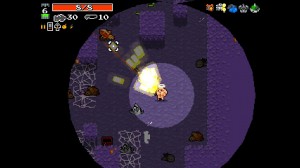 After a few plays and successful runs, you’ll start noticing the lack of variety in Nuclear Throne’s design compared to Spelunky and The Binding of Isaac

Again, I have to point out how well Isaac was designed in this regard. New content was regularly unlocked which changed subsequent plays and gave the player both short and long-term goals and rewards.

Nuclear Throne just has one very long-term reward and it’s hard to feel motivated to keep playing when I know that my chances of seeing new content on a run is very low. Meanwhile, I have to play through the same content over and over again without any gameplay changes.

This is the kind of game that begs for more short-term content and unlocks: New enemies, paths, weapons, etc, as a typical playthrough is short enough that you could add a lot of elements to make each run play out completely differently. Simply put, there isn’t enough progression to motivate someone to keep playing, unless you are going to be score chasing on each run.

Nuclear Throne is disappointing as both a rogue-like and as a game that has been through early access. Watching my earlier videos, I did not notice anything in terms of major changes or growth in the last year of watching the game grow. While it can be enjoyable for the first few tries, I just don’t see the same attraction to keep playing it compared to titles like The Binding of Isaac; nor does the game have the challenge and variety seen in Rogue-likes like Tower Climb.

With a very limited skill and progression curve, Nuclear Throne doesn’t have the boom of a nuclear bomb, but the whimper of a tiny firecracker.

Balancing the Baseline of Game Design