Odallus the Dark Call by Joymasher joins Yacht Club Game’s Shovel Knight as a strange sight in today’s market: A retro game that looks like someone dug up a never before seen NES title and released it today. 2D old school design when done right is one of my favorite genres and can show the skills of a great game designer and team, and Odallus definitely fits in that category. While it’s not going for modern allowances and callbacks, this is an amazing example of classic game design.

A Terrible Night for a Curse:

Odallus introduces us to Haggis, a barbarian trying to raise his son after the passing of his wife. When one night his village is attacked by the undead and strange creatures and he finds himself the only person who can save the day. The story grows with mentions of ritual sacrifices, Old Gods and the corrupting influence of power.

One look at Odallus and it’s clear that the developers were inspired by the NES. The game looks and feels straight out of the platform, complete with the main character’s in game face missing like in Castlevania. Don’t let the retro graphics fool you though, these are high quality graphics and reaches the heights of what we saw near the end of the NES’s lifecycle. I also have to give a shout out to the music; it’s catchy, sets the mood and all around adds to the quality of the game.

If you’re a fan of the original Castlevania or played any number of the action- adventure games on the NES, then Odallus will make you feel right at home.

Odallus the Dark Call despite looking like a Metroidvania was inspired by one of my favorite games: Demon’s Crest. Demon’s Crest was the spiritual sequel to Gargoyle’s Quest on the NES and was a 2D Action Adventure game where the player could replay levels to find hidden upgrades and powers that would add to their abilities; yes this came out before Symphony of the Night. 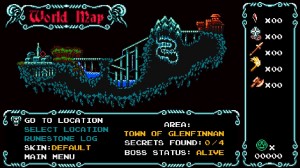 The world of Odallus is full of secrets and hidden paths

Each level of Odallus features hidden paths, secret items and possibly a second exit to discover.

As with Demon’s Crest, there will be items and upgrades that you cannot get on your first time through and as the game goes on, your tactics and abilities will vastly change thanks to new upgrades. The level design is possibly the biggest distinction Odallus has compared to Shovel Knight; where Shovel Knight’s levels only featured one path through.

Controls are very responsive as you are free to move around in the air; unlike in the original Castlevania which had committed jumping. Your main weapon is your sword which has a small attack range, forcing you to get up close to fight. Sub weapons are clearly inspired by Castlevania and each have a different attack radius and function.

What makes Odallus work so well is that this is a game aimed at the height of the 2D Action-Adventure genre, but made today. From the environmental obstacles to the enemies, everything is original. However, the developers have modern allowances with saving, unlocking shortcuts and the fact that despite the challenging platforming there are no death traps; instead when you fall into a pit, you’ll simply warp back to the starting spot with a little health damage.

Odallus the Dark Call is a hard game for me to critique much like Shovel Knight, because I can’t use an adherence to old school design as a problem when that’s the point of the entire game. If you enjoyed Shovel Knight for retro gameplay, Odallus will be right up your alley, but it is a harder take on the genre. Expect to replay the levels several times as you attempt to find all the secrets and much needed upgrades. 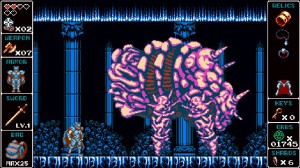 Lots of different bosses and enemies await to fight you

The only complaints I have are nitpicks with the design. The 2D pixel art is great, but it does make it hard to spot enemy tells sometimes as the animations are very subtle.

As a light spoiler, you will unlock a dash move that is triggered by double tapping in the direction you want to go (just like in Mega Man X). Personally, I would have found it a lot easier to pull off reliably if you could use a button shortcut as well.

Finally just like in Shovel Knight, Odallus is a short game. Chances are you should be able to finish it within 4 to 5 hours on your first play. There is quality here, but don’t be expecting a 20 hour massive experience.

Odallus the Dark Call is a great game and not only shows off excellent 2D game design, but the fact that you can get quality out of 8 Bit graphics and aesthetics. With this and Shovel Knight, we’re seeing developers bring back these classic games and mechanics but with modern twists, and I couldn’t be happier.

And for more about Odallus, you can watch my three stage playthrough spotlight I did on Twitch.

TIS-100: Back to BASIC for Zachtronics

Dungeon of the Endless: A Grim Return