One is the Loneliest Number: An Analysis of Lone Survivor 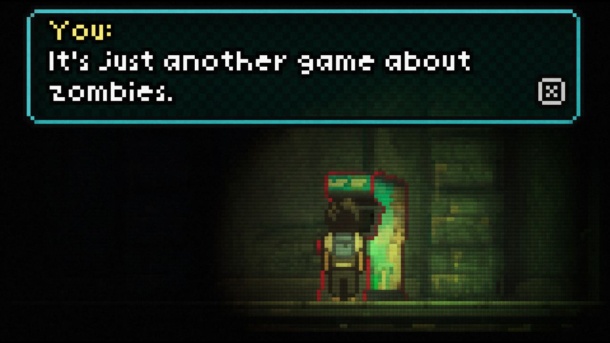 Lone Survivor has made its way to Steam and I had a chance to take a look. Billed as a 2d Survival Horror, while it may look simple from the outside, there is a lot under the hood to make it stand out.

The story is that you play as … well, you. A disease has hit the city you live in turning everyone into horrific monsters; you’ve taken shelter inside your apartment. But with no food left you have no choice but to leave your little safety nest to find food and perhaps a way out.

Gameplay is pretty straight forward, to get around you’ll need to either fight or sneak your way past the strange monsters in your way. Using maps that are found on each floor, will give you clues as to where you have to go. Light puzzle solving comes into play with getting around certain obstacles, but the puzzles are pretty simple.

That is actually pretty much the whole game-play and if it was just that to the game, Lone Survivor wouldn’t get much praise. But where the game lacks complicated gameplay, it makes up for it with atmosphere. First is that this is the only game I’ve played that deals with the “survival” aspect of survival horror. Every day you need to eat and sleep to keep your strength up, and the entire reason the game starts is that you’re just trying to find some food.

Unlike other games where food just matters  as a way to raise a hunger stat, here food comes in different qualities. Cheese crackers aren’t going to taste as good as a cooked ham. Your character prefers to have a full belly before going to bed, which also acts as the save function. This also forces the player to limit how much they eat over the course of a day, as their food supplies may be dwindling.

The act of dealing with a limited quality of items is a constant theme of the game. Batteries for your flashlight and ammo for your gun are not infinite. There are ways of getting more items, but the player will have to weight those costs.

The path and ending of the game are determined by the player’s actions. From whom they talk to, to what items they use, how many times they eat and many more. Everything gets factored in and after the ending; the game pulls back the curtain to show you exactly what you did to get that ending.

The way the player influences the story is a great touch and adds a lot to the game and atmosphere. Designer: Jasper Byrne shows his understanding of atmosphere and tone and how Lone Survivor goes back to the basic concept of survival horror. This isn’t a game about saving the world, or being a hero, it’s just you, completely alone trying to survive in an unimaginable situation. Something that Resident Evil has moved further and further away from with each new game. I like how the simple fact of having a good meal, lifts the spirits of the character. I would love to give more examples of how the game changes, but that would ruin the game.

While I did enjoy the game, I do have a few complaints and nitpicks. First is the map system, while the game is entirely 2D, the map is shown from a top down view. This makes it very hard to get your bearings going in and coming out of each room, as going left could mean going south on the map. There’s one section near the end of the game where the player is being chased that this becomes very annoying.

Second, while I can understand his design decision around limited use mechanics, I’m not a big fan of them. The reason is that it usually renders the first and sometime second play-through impossible for the player as they are trying to figure out where to go and when to use their items. To be fair, the game does make special concessions regarding the items. But there are some parts that are harder just because the player may not know how many flares to bring or bullets to have.

Lastly, as I mentioned near the top, the game features light puzzle solving. However it also uses adventure game design in item placement. That one door you missed in that corner tucked away, will usually have an item that is needed to progress. Once again, not so bad on repeat plays, but can be a pain your first time through.

Extreme Storytelling: The Use of Narrative Mechanics