Pato Box is an attempt at something we haven’t seen yet: taking the boss-focused gameplay of the Punch Out series and translating it into a brutal and dark story…and we play as a duck. With an impressive visual aesthetic, the game comes close to getting a knockout, but ends up getting a TKO.

You play as Pato Box, the world’s greatest boxer who is also a duck. After being betrayed by the company he worked for called Deathflock, he begins a one duck quest for revenge against his former associates. As you can see from the screenshots, the game’s aesthetic is all black and white and helps give it a noir feel.

However, you won’t be doing any detective work here. Each area is divided into two sections. You’ll first do some exploring to find clues as to how to beat each boss while getting through some obstacles. Once you make it to the end, you’ll enter a three-round “boxing” match with the boss.

The exploration is on the basic side: while you can be “killed”, there are plenty of checkpoints. The real gameplay of Pato Box comes in when it’s time to fight the bosses.

To the game’s credit, each boss fight feels unique despite the setting of a boxing match. You have the ability to dodge, block, and perform low and high punches. The fight itself is built entirely on a random pattern design. The boss will go through different patterns that will require you to respond. After certain patterns, the boss will be susceptible to a stun when you can then repeatedly attack. Do enough damage, and the boss will go into a second and third phase — increasing the difficulty of the patterns or adding new ones in. 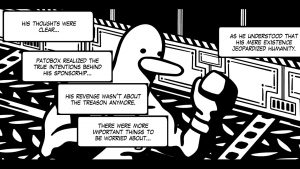 the black and white aesthetics help give the game a style

The later fights in the game introduce some light puzzle/gimmick elements to the fight. You’ll have to respond to each boss’s unique quirks as you try to get them down. You have some minor health regeneration, but all it takes is one knockdown for you to lose.

At its core, Pato Box’s design is solid, but the combat or lack thereof, causes some issues.

The major problem with Pato Box comes down to the boss fights, which is unfortunately a big part of the game. As we said, the game uses a random pattern design for boss behavior. The issue is that only a select number of those patterns allow you to damage the boss. You can sometimes get in random hits by mashing, but the game is obviously set up around counterattacks.

Unfortunately this not only increases the difficulty curve of the game, but slows down the boss fights. One of the best aspects of the original Punchout! and its sequels were how fast a knowledgeable player could win. In Pato Box however, you are metaphorically held back due to the RNG of the patterns.

Later bosses who get special gimmicks we were talking about can go 15-30 seconds + before you’re able to actually hit them if you get unlucky with patterns. Further still, the difficulty waxes and wanes based on what they throw at you.

Every boss has at least one nasty pattern that does lots of damage, and the rate that attack shows up during a match will determine the difficulty. Adding salt to the wound is that once Pato is hit, he becomes temporarily locked in place. If the boss is performing a multi-hit attack — messing up the timing at any point can lead to unavoidable damage. 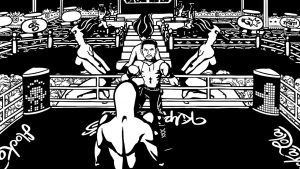 combat feels too mechanical for its own good

Timing your defense can be tricky, as some of the attack patterns can be hard to read in terms of how to avoid it. I eventually hit my limit with Pato Box at the final fight, where the boss literally becomes a boss rush against all the other fights in the game.

Pato Box has a solid foundation to the gameplay and black and white aesthetic, but I don’t think it goes far enough. Other games that are boss-focused either go for over the top fights like in Shadow of the Colossus, or provide rewards for technical play like Punch Out! and Furi.

With a little more depth, Pato Box could be a championship fighter, but he may just have to settle for the major leagues now.