Pid was released last year and was hit out of the gate with a slew of negative reviews. The game was a puzzle-platformer similar to titles like Vessel, Braid and in a sense, Portal.

Having played them all, Pid wasn’t a horrible game, but missed that “something special” that made those latter titles great.

The story of Pid follows a child named Kurt who after falling asleep on an intergalactic bus, finds himself stranded on a planet inhabited by robots. Apparently there was a coup and the planet is now under lock-down and Kurt needs to figure out what is going on and make it off the planet.

The first thing you’ll notice is the art style and Pid looks amazing. The visuals have a “soft” feel to it with robots of various shapes and sizes.

Localized gravity manipulation was the mechanic of the day in Pid. Early on the player gained the ability to throw orbs from their hands that could attach to any surface. Once attached, the orbs send out a light beam that changes the gravity in that direction.

Throw an orb on the ground and you could follow the light straight up, or on a wall to create a bridge across a gap. You could only have two orbs active at one time and the light beams don’t work on anything that is the color blue for some reason.

Puzzles revolved around using the orbs to correctly move the player and any important objects around the levels to make it through the exit and onto the next section. As the game went on, you would find items like bombs and high jump firecrackers that could be used, but were limited consumables. 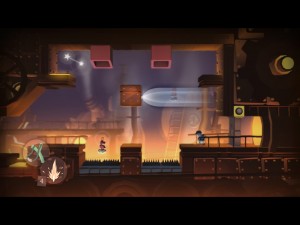 Light orbs could be attached to objects at multiple angles, each providing a different degree of boost.

Stars could be picked up as currency and used at vending machines to buy more items, but this felt like a superfluous resource which I’ll be coming back to in a minute.

The best part of Pid and what it got right compared to the other games was boss battles.

Each boss was with a unique giant robot challenging the player to figure out how to attack its weak point with their light orbs. Unfortunately those focused moments were few in far between, leaving the player with an inconsistent game for the rest of the time.

There are several problems with Pid and the main one is an inconsistent difficulty. Puzzles are made up of equal parts figuring out what needs to be done and then performing the necessary platforming to solve it.

As you play through the many puzzle rooms of Pid, the challenges vary between the two and made for an uneven difficulty curve. You may know the solution for a particular puzzle, but lack the platforming ability to pull it off.

Another issue with the difficulty was uneven checkpoints. In the early parts of the game, one puzzle was usually confined to a room and the game checkpoints after you beat it. But as you went further, you’ll start running into large areas made up multiple puzzles and obstacles to get around. 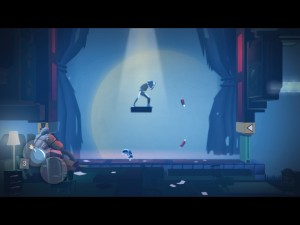 Homing missile enemies were some of the hardest enemies in the game and made the difficulty curve uneven.

Where dying can you send you back several puzzles or areas and you won’t have any idea where the checkpoints were.

Compounding the difficulty was that the player normally only has one point of health and any contact with enemies or hazards will knock the player out.

You can pick up armor that was either hidden in the area or buy it from a vending machine. But you may go several puzzles at a time before finding another piece of armor.

While the game was touted as a puzzle-platformer, it featured a lot of frustrating combat due to the enemy designs. You’ll run into enemies that fire homing missiles that do a great job of tracking you. In these cases, the main way to beat the enemy was to get the missile to run into them. This required a lot more action skills that we normally see in games built around puzzle solving.

While Pid got the concept of boss fights correct, the designers did not do a good enough job differentiating the puzzles compared to other titles which is the other problem.

Using gravity orbs the same way made up the bulk of the puzzles in Pid. And every new item that altered the puzzles came with multiple puzzles drilling the point home about the new item.

But at the end of the day, you’re still doing the same things and moving around the environment the same way. Contrast that with Braid or Vessel, where each new level or world introduced a new mechanic or variation on the main system mixing things up. However in Pid, new mechanics and challenges came slowly over the hours spent playing.

Now, another aspect of Pid was the use of the consumable items we talked about earlier. The problem was that most of the time you want to hoard them as the cost of the vending machines was pretty high. This lead to the same item hoarding problem we see in RPGs. 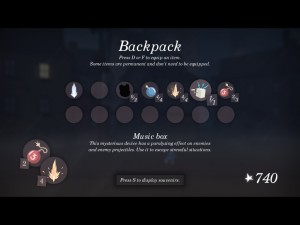 You’ll pick up a variety of items in the game, but upgrades come few and far between.

But, when you hoard items, in turn it makes the star currency meaningless as the times where said items were required; the game will give you an infinite amount.

By downplaying the stars it made having stars hidden in hard to reach areas pointless as it doesn’t make sense to risk repeating the puzzle just to get a few more stars.

Upgrades were found few and far between and were either hidden, or rewarded for boss fights. However once again, since upgrades only add to the consumable total, it didn’t make sense to spend time hunting them down.

Lastly, playing the game with a keyboard, I could tell that the game was designed around a gamepad. As it felt awkward selecting items and using abilities; the game could have used an aiming system with the mouse for more accurate light orb throws. You will eventually get a slingshot upgrade for making aimed throws, but this came several hours in.

Pid was an interesting idea, but the design felt like it was pulled between being an action title with puzzles, or a puzzle game with action segments. In the end, Pid came off as being unfocused and I think a shorter game with less “fluff” puzzles would have helped move the player along better.