For the recent fans of Telltale Games who know them for their adventure games like Sam and Max and The Walking Dead, you may be surprised to know that their original lineup included a Texas Hold’Em game. In 2010, Telltale teamed up with Valve to release Poker Night: the first game to reward players with content for another Steam game.

This time Telltale has raised the stakes (yeah… I’ll try to keep the puns to a minimal) with Poker Night 2. But is the game good, or is it just bluffing?

Poker Night 2 takes place at the imaginary bar and Poker House: The Inventory. Where video game characters go to have fun and get into high stakes poker tournaments. This time the cast of characters are: Brock from Venture Bros, Ash from Evil Dead, Sam from Sam and Max and Claptrap from Borderlands 2, with Glados from Portal as the dealer.

The main cast was voiced by their respective actors from what I could tell, with exception for Ash. Although if this was Telltale’s clever way of hinting that they’re working on an Evil Dead game, then I’ll forgive them for not having Bruce Campbell.

You can either play Texas Hold’em or Omaha style which probably means more to the professional players reading this. If you are new to the Poker Night series don’t expect to find any crazy rules or first person shooting segments, this was all about the card playing. 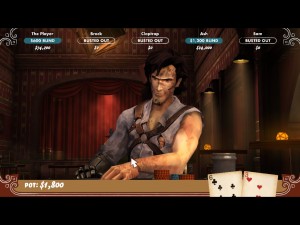 Ash from Evil Dead was a surprise, but the lack of Bruce Campbell was noticeable

Besides playing poker and listening to the characters talk, the other draw is of course the game spanning rewards.

In the first Poker Night you could win Team Fortress 2 items on random tournaments. With the sequel you could also win items for Borderlands 2 as well, but with the added reward comes a greater challenge.

This time the game will give you three random challenges to achieve: ranging from winning a tournament to coming out of a showdown as a winner. Complete all three and the next tournament will have an item from one of the characters as a reward. If you can win the tournament the item, Team Fortress 2 and Borderlands 2 rewards will be yours.

Besides the cross-game rewards you’ll also earn inventory tokens that can be used to buy decks, chips and the table from the various game properties. Selecting all three from a specific property will change the theme of the area and affects the conversations you’ll hear during the match to some extent.

The only real non-card playing element to Poker Night 2 was the ability to buy drinks for the other players. This in theory was supposed to make them loosen up and show their tells more often, but with the camera panning between the different characters can make it hard to capitalize on.

For people reading this analysis to know how well Poker Night 2 simulated playing Texas Hold’em, well… I’m not the guy to talk to about that. I know more about Blackjack then Texas Hold’em and I don’t have the authority to say anything on the quality of the AI.

The only thing I did notice was that it seemed like it was very hard to bluff them most of the time and certain decisions would repeat. Once again I don’t know if that is typical poker behavior or not.

Now talking about Poker Night 2 as an actual game is a different story.

It’s common knowledge that most of the people who bought the first Poker Night did it not for the writing or the playing, but for the TF 2 hats. With the addition of the challenges and drinks, TellTale attempted to add more of a gameplay element to Poker Night 2, but I still don’t see this game having legs. 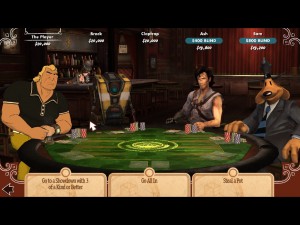 Challenges are now required to unlock new items, but their randomness makes the unlock rate uneven.

I’m not sure if this was bug related or due to the conversations being spread out across the motifs, but I had repeats happen far earlier into playing Poker Night 2 then in the first game.

There was also a bug with the winner of a showdown saying the lost script, but were really the winner.

The quality of the writing was also debatable beyond just hearing the same quips over and over again. Ash seemed obsessed with his Oldsmobile while Glados kept making death threats or stupidity remarks after almost every decision you make. You also can’t skip through any conversations outside of the one at the start of the game, making things all the more annoying.

My favorite conversations were from Sam and Max (who was not voiced by the one from the series, but came close to it.) For people who are interested in the writing, I definitely suggest going through the game to unlock the different themes, as that is when you’ll hear the best one-liners in my opinion.

The menu was cumbersome to go through, requiring you to wait a few seconds each time you want to move to a different screen. There also didn’t seem to be a way to quickly start a new tournament if you were very unlucky. Speaking about tournaments, the game doesn’t recognize you playing a themed tournament unless you manually change it during the match, as oppose to having one selected before starting.

For the price, Poker Night 2 is probably worth it on the value of the items alone but other than that it feels like more of the same. The improvements added help a little to make Poker Night 2 feel like a game, but chances are most will still see it as an in-between to get more TF2 items.

For the series to keep going I would like to have multiplayer as an option and maybe a way of betting steam items. I know that sounds crazy, but is it any crazier than having a game where a robot, talking dog, bodyguard and one arm bad-ass play poker together?