Prey by Arkane Studios did not have a lot going for it at launch. The complete reboot of a series that already spent years in development, Arkane decided to do what they always do: Make something completely different. What we got was a sleeper hit in terms of game design, and another game that blurs the line between action and abstraction gameplay.

Prey takes place on board the Talos space station in the far future. Playing as Morgan Yu, you wake up to discover the last three years of your life have been a lie set up by your brother Alex. The space station has become infected by an alien life form that has been referred to as “Typhon.”

If the name of this section didn’t clue you in, Prey takes heavy influence from Bioshock and System Shock in its approach and design. While you do have missions to achieve, you have complete freedom to explore and get around challenges.

The level design and environmental storytelling are some of the best I’ve seen in some time. Each area of the station is not that big in terms of space taken up, but the level of detail is astonishing. There are always multiple rooms to explore, hidden pathways and items, and so much more.

This also plays into a major part of Prey’s design: Giving the player choices and having them matter to the gameplay.

Prey’s major tenet is that the player is in control of how they want to play through the game. At the surface layer, the game allows you to either fight or sneak your way around Talos 1, but there’s more to it than that. 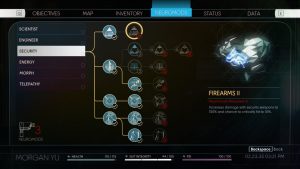 Neuromods, Prey’s version of Plasmids or Tonics, allow you to upgrade Morgan. The game starts out with three trees of perks, with three more unlocked later in.

The perks themselves cost different amounts of neuromods to install. Each perk will radically change Morgan’s ability, and by design, the player’s options.

Beyond that, the player gets access to a small, but very flexible number of items and weapons. Instead of focusing on a lot of weapons and turning the player into a one-man army, Prey is all about tools. Your pistol for example is also your long ranged stealth option.

Very early on you’re given the Gloo gun which may be the best unorthodox weapon in a FPS since the portal gun. The Gloo gun can freeze certain enemies to open them up for attacks, create makeshift platforms and barriers, and is used in many of the game’s puzzles. Every one of Morgan’s items can be used in different situations.

The beauty of the game is that very rarely will there only be one way through a situation. Depending on the player’s penchant for lateral thinking, the game rewards people for coming up with creative solutions. Many areas have completely different paths through them, and rarely will you come to an obstacle that only has one way to get by.

Speaking of different situations, the small, but varied approach also applies to the game’s enemies.

The Typhon may lack that easily identifiable look like the Big Daddies of Bioshock, but they are some of the most interesting enemies seen in the genre. There aren’t a lot of enemy types in the game, but each one was designed to present a unique challenge to the player.

The small mimics can transform into literally any interactable object in the game and lie in wait for the player. The phantoms come in different varieties and act as the game’s shock troops. Even larger enemies could be considered mini bosses and require specific tactics to take them out. 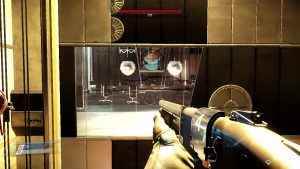 Each enemy type will test you in different ways

The different enemies have hard defenses and counters that you can learn by scanning them (akin to Bioshock’s camera). They will also respawn when you leave and return to previously visited areas.

As a special point, I would like to give the developers credit for not creating generic boss fights; in fact, there are no bosses period. Outside of a few optional areas, the game never puts you in an area and tasks you to fight your way out of it.

What makes Prey work is also where the problems I have with the game lie.

Don’t let the screenshots fool you, Prey is not a FPS. The game’s progression is built on abstraction, and is more of a RPG.

This is a game where you can get the drop on enemies, but without the right perks you will not be able to easily fight them. There is very little in terms of player growth or mastery in the game. You will understand everything there is to Prey’s gameplay long before you reach the end of it.

While the game is open for a lot of different approaches, they all just boil down to “fight” or “sneak.” Once you’ve figured out your plan for either situation, you can really just repeat it in any area. By the time I was 2/3rds done Prey I had every tactic I needed to win down, and there was still a third left.

Each enemy type did have its own tactics to get around them, but there wasn’t much variance within each type. Once I figured out the best way to fight them given my abilities and selection, I just repeated it for every fight. The first time you fight these enemies during the front half of the game, the combat is challenging due to the abstraction. Every player who finishes Prey will hit that point when the fighting just becomes routine. 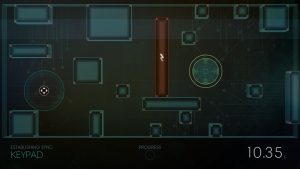 Because progress is locked to the abstraction side of things, it made doing the side quests very disappointing.

They became a slog of repeating sections you’ve already went through; with the added bonus of re-fighting enemies. Only a few of the side quests actually provided meaningful rewards that changed things going forward.

Due to enemies respawning, it created a hoarding scenario of your advanced items, because the resources you could use to craft would not respawn.

Prey is a fascinating game to explore, and you can tell that Arkane really put everything they had into it. While it may occupy that weird space between action and RPG design, I would love to see them iterate on this for a sequel. Be sure to watch the video for a spoiler discussion on the game; after you’ve played it of course.