Riptale by Super God is a high speed action rogue-like that pumps the player up for flying around the screen slashing up monsters. The game presents itself with a great mechanic and design, but the problem is that the rest of the game didn’t get the memo about where the fun is.

The story is that the world is under siege by monsters and dragons and you’re the only one who can save us. Armed with magical gems, your mission is to dive underground to find the source of the evil and kill it. Riptale is all about action, and reminds me of the fluidity of games like Shinobi for the PS2. Your gems at the top of the screen represent the number of times you can attack in a single combo.

By killing enemies and breaking crates, you’ll get gold that you can use to buy new gems and change your attack pattern. Combat is not about simple slashes, but flinging yourself in the air to cut enemies in half. Keep killing and you’ll build up a combo that can quickly recharge your gems. Otherwise, gems will recover after a few seconds of inactivity.

The levels are split into different areas that determine the enemies you fight; with the rooms randomly generated. You start the game with four hearts of health and once you run out it’s game over.

The aesthetics are striking, but can make it hard to keep track when things go crazy

Riptale is a game about moments, and when you fly through the air and slice up an entire room it’s great. The problem is that the rest of the game was not designed to make the most of the combat system.

Riptale reminds me of the classic problem of Sonic the Hedgehog. The developers built the game around motivating the player to keep moving, but anyone who has played the series knows that you have to take it slow or you’ll run into a bottomless pit or trap.

Riptale wants you to play the game like a 2D Shinobi; effortlessly chaining combos and kicking ass. Unfortunately, the game’s design seems to punish you for doing this.

The combo system does not provide adequate rewards for growing in skill with the game. While gems recover once you hit a 3X chain, there were plenty of times where there weren’t enough enemies to quickly recover.

Aiming is one of the game’s worst offenders. There is no reticule on the screen; forcing you to aim by your character’s position. There were plenty of times where I could not hit an enemy who was close to me. Once you start the attack, you are committed to it; leading to cases of overshooting an enemy.

There are no invulnerability frames in the game while attacking. In return, enemies with projectiles are the worst to fight. Because you can’t dodge the shot, it’s very easy to run into them while attacking and take damage. 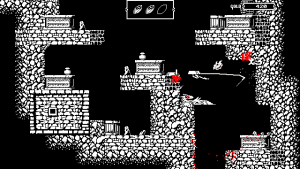 This is one of those games where you can go minutes without taking any damage, to then being at death’s door because of one room. This is compounded by the aesthetics of the game. Riptale’s color scheme is white on black with a little red for blood.

The problem is that white enemies blend into the white foreground; making it easy to miss them and take damage. Many enemies even attack with white projectiles to make things even more confusing.

All this comes to a head with the boss fights and how they just break the design of the game. Suddenly, you’re fighting enemies who can attack off screen, take multiple hits to kill and have no discernible animation tells for when they attack. Not only that, but striking bosses doesn’t count for the combo string and recovering your gems.

Swing and A lot of Misses:

Riptale is a case where the mechanics of play aren’t meshing with the rest of the design. The majority of the problems could be fixed via fine-tuning the game, but at this moment I can’t recommend it. The game give the illusion of being about speed, but your only hope for survival is to play it slow. For more on the game, you can watch my spotlight video below.

Crafting the Music of Dawn of War 3

Why Video Game Journalism is Failing the Industry