A Robot Named Fight is a rogue-like Metroidvania with a heavy emphasis on the Metroid side of things. The game has a great foundation, but the rogue-like side of things could use some fleshing out.

The story of A Robot Named Fight follows robot kind being assaulted by the mega beast: A giant monster raining down monsters from above. You play as the title suggests a robot named fight who must find its way to the beast and kill it.

The game draws heavy inspiration from Metroid and The Binding of Isaac. The game features hard coded rooms which are procedurally put together at the start of each new game. As with any Metroidvania, you’re going to find a variety of upgrades on each run.

The interesting element is that major upgrades that unlock new moves or weapons are limited per run. While you will still get through the game given the upgrades, how you do it each time will be slightly different. There are also tons of stat upgrades hidden in walls, ceilings and more.

Playing through the game and defeating the many bosses will unlock new upgrades that will be factored into subsequent plays. 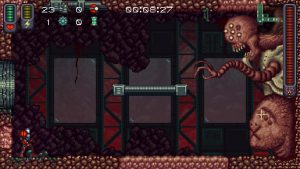 A Robot Named Fight is Metroid by way of body horror

And if you haven’t guessed by the pictures and video, A Robot Named Fight looks and sounds very similar to Metroid.

All in all from a gameplay point A Robot Named Fight works great, but it’s lacking in what makes a rogue-like amazing.

Replayability is king for any good rogue-like, and this is one area where A Robot Named Fight doesn’t work at the moment. There just aren’t enough variables to make each run feel unique. There are no random events, new areas and bosses, or meaningful unlocks to mix things up. The procedural nature of the levels isn’t on the same scale as the Binding of Isaac, and I started to run into repeated rooms very quickly.

The enemy designs are kept very basic throughout the game and fall into two groups: Those that rush you and those that shoot at you. The bosses are unique, but are also the easiest enemies to fight, which is another problem.

The balance in terms of danger is off in the game. The most dangerous obstacle in your way are small enemies. The reason is that the enemy size has no relation to the damage they do. The further you go into a run, the higher the enemy damage gets. By the midpoint, enemies can easily eat through your health. This is compounded by the fact that invincibility after damage is about a millisecond long.

Most of my deaths have been because enemies bum rushed me before I could shoot them and ripped apart my health.

The game also randomly distributes stat upgrades throughout the world. This can lead to some unintentionally easy or hard runs depending on what upgrades you find and when.

A Robot Named Fight has a great foundation, but it’s missing half the formula at the moment. It’s a good Metroidvania, but a bad rogue-like. There has already been improvements made in the form of more room designs and items, and I’m hoping that things will improve.

While it may not come close to hits like Spelunky and The Binding of Isaac just yet, A Robot Named Fight is an impressive start.