Satellite Reign was one of many successful kickstarters funded with the goal to bring back a classic game to modern audiences; in this case, the classic yet futuristic world of Syndicate and Syndicate Wars. The game is now out of Early Access and ready for people to take on the future. While it’s not exactly the same flavor as the original game, Satellite Reign is a unique combination of strategy and open world gameplay, but this future tech has some bugs in the system.

Satellite Reign takes place in the future where mega corporations rule over the world. One such corporation has patented the technology to preserve and transfer a person’s consciousness to new bodies, or in other words immortality. Your job as a rival corporation is to lead a group of agents through the city, gaining power, money and technology to wage war and become the one in charge.

The big difference compared to the original Syndicate (I should point out that I did not play Syndicate Wars) is that things are completely open ended instead of being framed around set missions on limited maps. After a brief tutorial, you and your four agents are put into the Downtown District of the city; from there, you have free reign (no pun intended) to explore and complete missions to your heart’s content.

Your four agents are each spec in one of four classes: Solider, Hacker, Infiltrator and Support, with each having different skills that can be upgraded and special abilities. The entire game is played real time as you can move one or all of your agents around, with the limiting factor being that you can only explore one district at a time.

There is a lot to do in each district with missions both optional and required to help you with your master goal. The hook is that everything is happening in real time and you can go in and out of mission areas and explore as you would in an open world game. Another big part of the game is the customization aspect of your four agents and what you can do to enhance and specialize them. While the classes are set, everything from what skills to unlock, equipment and modifications and even their own bodies is up for you to decide. 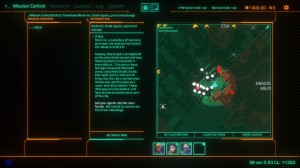 Because this is a world where people’s minds can be transferred to new bodies, one of the game’s more interesting forms of upgrading is scanning people on the street to capture as clones for your agent’s minds. The catch is that the body can only be used once to give you enhanced stats; if the clone dies you will have to find a replacement to keep your agent’s passive stats up.

All this customization wouldn’t mean a lot if there wasn’t anything to do, and Satellite Reign’s mission and progression model will keep you going.

As I mentioned already, Satellite Reign is completely open world and you are free to explore and complete missions on your terms. For players who want to go loud, there are a number of weapons that you can equip and get into isometric shootouts on the map; whether in mission areas or just on the streets with the local law enforcement. For stealth players, you can equip silenced weapons and attempt to either kill enemies from behind or hack your way to the mission objectives.

The game does a good job of motivating you to explore and complete the variety of objectives. There are supply points that you can turn on that give you fast travel and new missions, the ability to research new gear with prototypes, finding ATMs on the street to hack for money coming in and a lot more. The idea is that each objective gives you more control and options within each district; allowing to move around easier and take on the harder objectives.

For more challenge, districts have secured zones where you’ll need to either sneak around or get into all out gunfights to reach your targets. Prototypes offer a risk/reward, where you’ll need to get them to safety to use them and then you need to decide to either spend money time mass producing them, or equip them onto one agent with the penalty of losing them on death. 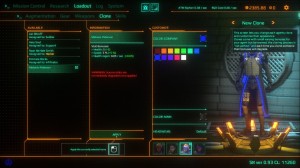 The game offers a lot of ways to personalize your experience, thanks to your classes, clones and the equipment you find

Satellite Reign reminds me a lot of the isometric strategy games I played like Commandos, thanks to its combination of isometric play and real time strategy.

Unfortunately, for a game that is set in the future, its UI feels needlessly archaic and gets in the way of enjoying all the espionage action.

Isometric strategy/action titles are a relic of the Game Industry these days and a good reason why was because they are incredibly cumbersome to play. The problem is that you’re left in a catch 22 due to the camera setup: You either play zoomed in so that you can make accurate motions, but can’t see the big picture, or you zoom out so that you can see everything but not easily control your guys.

Satellite Reign suffers with trying to control the game and showing the player what’s going on. The mini map is bare bones and I had to constantly switch to the menu’s full map to find objectives and important objects. Stealth can be frustrating due to how hard it is to tell whether you’re safe or not.

In one case, I hid behind a low wall and the enemy didn’t see me from the other side, and when I did the same thing in another area he immediately detected and opened fire. The game features an escalation system similar to GTA; where the more fighting you do in one area, the greater the response will be to stop you. If you get spotted during a mission, it’s very hard to escape line of sight because it’s hard to tell the enemy’s detection radius.

I also couldn’t figure out how experience worked; for instance I was using my hacker on a mission when my solider leveled up when he was just standing around. Moving on, the actual UI itself seems to be stuck in the past. Selecting clones for your team feels awkward thanks to prompts without any real information; you can’t select weapons on your agents without putting them in offense mode which raises suspicion.

But what may be the biggest point against Satellite Reign is one of the main bullet points from the developers: That the game’s mechanics and customization can lead to emergent gameplay; where the player can play the game their way. While technically that’s true, there is one big element in the way: The game is linear. You are free to explore the map and deciding what missions to do and when, but you are still on a set map dealing with set objective points.

Meaning no matter how you spec your team with skills or giving them gear and weapons, they are still tied to missions with only a few ways to complete them. The early parts of Satellite Reign can be painful due to the lack of upgrades that allow you to bypass or find different ways of getting around trouble which again are all set options. 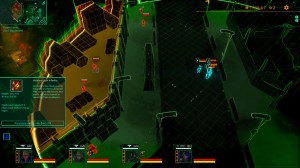 And then there were the bugs; from characters not responding, getting caught on the environment, menus not working and even one of my agents falling through the floor and kept on getting stuck.

For a game that went through Early Access with the specific intent of bug squashing, there were still plenty of bugs for version 1.00.

Ghost in the Machine:

Satellite Reign is not a bad game, but there are a lot of rough elements that do bring down the quality. The developers were hoping to fund a co-op mode which sounds perfect for this type of game, but they didn’t hit the funding goal.

There are a lot of really fascinating ideas present and the game hits all the notes of providing open ended gameplay set in a cyberpunk world. However, it’s missing that connection between the mechanics and the greater world at large and the bugs aren’t helping matters.

If you want to watch some footage of the game and see some crazy bugs and strategies, here is my spotlight companion video.