Shattered Planet was the first title by developer Kitfox Games and their goal was to create a rogue-like on the less serious side (see also Dungeons of Dredmor.) While it’s a great first title from the studio, Shattered Planet does stumble in the rogue-like department due to what sounds like a strange complaint of too much Meta game design.

The story of Shattered Planet is that you’ve been brought to a mysterious planet to perform a survey of the creatures, environments and situation along with your trusty sidekick and space ship.

After a brief tutorial, you’ll be taken to your space ship which acts as the hub and equipping station. Your character can be cloned into different classes that have passive bonuses. You can also use in game currency to upgrade your class’s stats with the cost getting progressively more expensive and buy equipment to wear when you go down to the planet.

The two currencies available are scrap and crystals which are found on the planet and are rewards. The game features a cartoon aesthetic which is clean and serves the game well and reminds me of Dungeon of Dredmor’s streamline design. 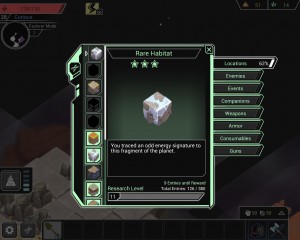 The data log stores everything you’ve discovered during play and acts as the progression model for new content.

All the possible encounters that you can run into are the basis for the meta-game progression which takes us to the problems with the game.

Unlocking new content is done by completing the data log that catalogs everything that you find in Shattered Planet. After specific thresholds you’ll go up in research level which unlocks new characters to play as and gives you upgrades. Using the game’s randomized design and discoverability to impact the progression was a smart move and gives the player a lot of progress early which tapers off the farther you go.

However this is where the problem with Shattered Planet lies as too much of the game is focused on progression outside of the actual playing. You won’t find a lot of equipment during a run and you’ll make most of your gear back at the ship. Similar to Rogue Legacy, too many elements that impact playing the game don’t happen during the actual game and this can make things somewhat boring. I found my interest in playing diminished way before I started to reach the end of the data log. 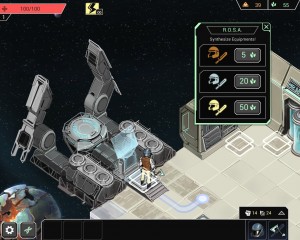 The majority of your items will come from spending crystals after a run and not found during play.

I liked the use of discoverability linked to new content but it would have been better from a rogue-like perspective to keep progression not permanent through the clone upgrades but with more items and variety while you play.

In other words, more like the progression system of The Binding of Isaac that made permanent changes to the randomization as opposed to the character itself.

Another odd design choice was that during any of the non quest related runs, there did not seem to be an option to return to your ship with any loot acquired and the only way to go back was to die and lose it all. This sets up the focus of the game on acquiring crystals and scrap which again keeps the progression based on what happens after a run instead of during it and delays your attempts to take on missions until you have enough stats and items.

While Shattered Planet may not have the depth of a rogue-like, it’s still a good rogue-lite for people new to the genre. I don’t know if it was targeted as such, but even though the permanent upgrades may not make it popular for hardcore rogue-like fans, it’s a great progression model for people who may not be used to the back to 0 structure of traditional rogue-likes. In the end Shattered Planet isn’t a bad game by any means and is great to get for a friend who is interested in rogue-likes but you don’t want to expose them to the hardcore end of the pool with games like FTL or the Binding of Isaac just yet.