I wasn’t originally going to review Shovel Knight Plague of Shadows as it was originally a stretch goal and simply more content to the Shovel Knight experience. However, after finishing it up and getting the full breadth of what Plague Knight offers, the different design and gameplay deserves a closer look.

Plague Knight is playable either after finishing Shovel Knight’s story or entering in a code. The game takes place side by side of the Shovel Knight campaign with the difference being that Plague Knight is on a mission. He’s on the hunt for the essences of the other knights in order to create a potion of ultimate power. To do that, he’s enlisted a guild of alchemists and has a base of operations under the town from the original game.

Plague of Shadow’s campaign follows the same levels and progression as Shovel Knight’s, but there are new Plague Knight specific areas that make use of his unique moveset. Plague Knight is a lot more mobile compared to Shovel Knight and has a different attack style.

Plague Knight’s “attack” is bombs made up of three components: The casing, the powder and the fuse. As you play through the game, you’ll unlock these components and are free to mix and match them at your discretion. Besides that, you also have a charge attack that launches Plague Knight and allows him to cross gaps a lot farther than Shovel Knight; this is important because you don’t have the pogo jump ability. More importantly, his blast jump is a committed base jump, meaning you cannot alter your trajectory once you’re in mid-air. This adds a new layer of difficulty to Plague Knight which was intended as the campaign was meant to be a reward for expert players. 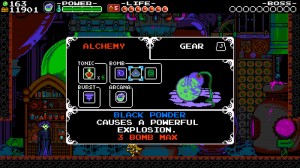 Plague Knight is a lot more complex to play as compared to Shovel Knight, and requires you to relearn how things work

Besides the new section, special Plague Knight coins are now set up in hard to reach areas in each level which are used to unlock new components for your bombs.

Without spoiling things too much, there are a few different fights in Plague of Shadows, including a new final boss.

If you get tired of the campaign, there are plenty of new challenges for both Shovel and Plague Knight to go after. They are split between speed run boss fights and unique challenges. For a free expansion there is a lot here and I’m really impressed with Yacht Club Games.

Shovel Knight was a love letter to old school design: From the pixel based graphics, soundtrack and of course nods and homage’s to classic games. With Plague Knight, the gameplay to my memory is entirely original for the genre and shows that Yacht Club Games can take things in a different direction; similar to Odallus the Dark Call from Joymasher and how they expanded on the 2D design.

With that said, Plague Knight does present some new problems compared to Shovel Knight. The blast jump is probably the most polarizing element of the new expansion. Committed jumps were not a part of Shovel Knight which was very appreciated by fans, but having them here adds another layer of difficulty.

I actually said, “Screw it,” and used the floating blast jump ability for the entire game, as I didn’t want to have to deal with that. The fact that something like that had to be made does say a lot about having committed jumping in today’s market. Just like in Shovel Knight, the length may be another sticky topic, with the campaign lasting about a few hours. Of course, now you have both Shovel Knight and Plague Knight together in one package which is great for new players. 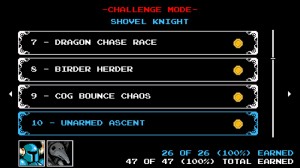 Finally from a control point of view, I found Plague Knight to be a little more cumbersome to play compared to Shovel.

Having the blast jump tied to holding down the attack button caused me to slip up using it a few times. Having to change your bomb also took me out of the experience more compared to Shovel Knight.

The reason is that you’re doing a lot more from the menu compared to Shovel Knight and selecting a relic and armor. While choice is certainly appreciated, I would have liked maybe a hotkey for quick switching between bombs.

For fans of Shovel Knight looking for more challenge, Plague of Shadows is a great addition and worth firing the game back up again. I’m really looking forward to what they will do with their other planned expansions after seeing the quality here.

For more on Shovel Knight, I have a lot of links this time: