South Park the Stick of Truth has been a long time coming. Originally a part of Take Two’s lineup, the game seemed to be in development hell with no solid information and multiple delays. When Take Two folded it seemed that the game was doomed but Ubisoft swept in to save the game and gave developer Obsidian Studios a chance to keep working on it.

And now that it’s out, we have a game that for all intents and purposes should have sucked. But instead we have one of the strongest games based on an IP since Batman Arkham Asylum; however that depends on how much of a fan of South Park you are.

Let’s get the simple fact out of the way; if you are not a fan of South Park and find their humor distasteful, then this is not the game for you. The story is that you play as a new kid who has moved to the quiet little town of South Park after a mysterious incident forced your parents to move.

Upon arriving, you are swept into the boy’s epic LARP that has transformed the town into a fantasy world where elves and humans fight over the mystical “Stick of Truth.” The first thing you’ll notice is that the game really does look like the show.

The paper figure aesthetic of the show is perfectly translated into the game and it really does look like you’re playing an interactive episode of the show. All the voice actors reprise their respective roles and the story was written by the show’s creators. And things go from weird to odd to WTF over the course of the game.

The entire town is open to explore and it’s easy to get distracted from the main quest as you explore all the major buildings and sites in South Park while finding Easter eggs and such. The exploration pays off with the game’s buff system, where you’ll unlock buffs based on the number of friends you have on your in-game fake Facebook profile. This requires you to explore to find people and complete quests.

The gameplay is a takeoff of JRPG design, specifically that of the Paper Mario series with a few new touches. Every battle will be with you alone or with a partner. You can attack with either a melee or ranged weapon with different attacks that can be pulled off.

Both attacking and defending can be augmented by timed presses of the attack button, allowing you to resist more damage or dish it out. When facing boss enemies with powerful attacks, getting the timing down for blocking can mean the difference between getting hit hard or barely taking a scratch. 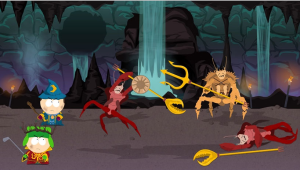 Enemies can resist or be susceptible to different types of attacks and you’ll need to figure out the best ways to take them out.

At the start of the game you’ll pick a class between warrior, thief, mage and Jew (which is South Park’s version of the priest class.) The class itself determines what special powers you’ll unlock as you level up and class related equipment you’ll gain at specific points.

Other than that, you can mix and match any of the gear that you find and change their colors as well. Passive abilities are the name of the game as every piece of equipment has a buff attached to it and you can buy add-ons that can be put on equipment or weapons for added bonuses. Being able to synergize between weapon, equipment and add-ons is required to deal with the variety of threats in the game.

As a great touch, the developers made exploring the world more involved compared to other RPGs. You’ll unlock “magic” in the form of special fart attacks that can be used to interact with characters and objects on the field. Many areas feature environmental items that you can use to take out enemies before engaging with them. It’s a great way of rewarding players who don’t rush into combat and gives the various areas more personality to them.

Looking at South Park the Stick of Truth from an IP standpoint, Obsidian knocked it out of the park, but from a RPG perspective the game has some major issues which are surprising considering the background of the studio.

The problems with the game stem from one major issue: That the developers wanted to make a South Park game first and a RPG possibly fifth or sixth as the mechanics suffer from being poorly utilized or dumb down.

It’s very easy to break the game’s difficulty with even the most basic understanding of the passive system. The damage per turn effects like grossed out or bleed are very powerful and it doesn’t take much to turn them into more effective attacks compared to your main weapon. Even playing on “hardcore” difficulty, I only died a few times due to stupid mistakes. By the end of the game, I had a routine down that I was winning every fight outside of bosses in under three rounds.

There are few standouts in terms of equipment and add-ons, with the majority useless or too situational. For someone who has been weaned on RPGs like Etrian Odyssey or Shin Megami Tensei, South Park the Stick of Truth will seem simplistic to them.

Sticking with combat, one thing I noticed was that the timing for attacks never felt right to me. The trick is that you’re not supposed to watch the attack animation but the symbol at your character’s feet. When there are attacks that cover the screen or feature weird animations, the timing sometimes doesn’t seem consistent. 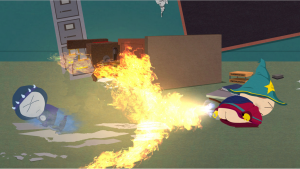 If you think this is the most disturbing image you’ll see in the game, you are sorely mistaken.

Both the player and the enemies can have armor that reduces damage, but as the armor values continue to escalate, this has the side effect of rendering a lot of weapons useless.

Even if they have good buffs, without having enough damage to circumvent the armor, they won’t be able to help you. This also makes add-ons or weapons that cut through or destroy armor very powerful.

Enemy defense also seemed very weird, as there were cases where I was just demolishing enemies and other times I was barely doing any damage. I didn’t see the armor icon over their stats and the game didn’t really offer any information to tell me what was going on even with the examine feature. This led to combat that either was over in a few rounds or dragged on as I slowly ticked away the enemy’s health.

Then there were the UI issues that led me to believe that Obsidian was pressured to simplify things for non RPG fans as things felt needlessly cumbersome. There’s no way from what I could see to sort equipment, special abilities that do damage don’t tell you how much they do and other examples of a clumsy UI.

Despite the variety of enemy models and attack animations, there are only a few types of enemy attacks and strategies and things became repetitive quickly. Side quests do mix things up and introduce more of the cast from the show, but the quests themselves are just fetch quests with no real depth to them.

And this is why South Park fails to dethrone Batman Arkham Asylum as one of the best licensed games. Because if you remove any and all uses of the IP and just look at Arkham Asylum from a gameplay perspective, the design holds up and is engaging. But with Stick of Truth, remove the South Park IP and there just isn’t anything here worth playing.

For the console versions, I noticed some technical issues including music not working, slowdown and a lot of loading between areas. While not damning, these are just more items on the list of problems for the game.

In the end, South Park the Stick of Truth is an excellent South Park game but a mediocre to average RPG. And your personal enjoyment will boil down to how much of a fan of South Park you are. It’s a shame considering the pedigree of Obsidian and the fact that we know they can make complex engaging RPG systems.

With a bit more development on the RPG side, the game could have easily had enough content for both fans of the show and fans of RPGs to get into. The story’s absolute craziness was good enough to carry the game but South Park the Stick of Truth was definitely an example of a “for the fans” experience.