The Tower Defense genre is one of the most popular genres to create games for next to the 2D platformer. While the mechanics are simple, there are so many ways to alter and twist them to make your game standout. From RPG mechanics in Defender’s Quest to making the “towers” move in the Anomaly series. Space Run is an interesting case by making you the tower in a high speed space journey.

The story of Space Run finds you in the distant future where humanity needs someone brave enough to transport goods across the galaxy dealing with asteroids, pirates and more.

At the start of each level, you’ll add required modules to your ship which are usually thrusters and cargo. Each hex on your ship can take a module with certain modules having size and placement restrictions. After that you’ll blast off and make your trip across the stars.

The object is to get to your destination without having your ship be destroyed. The command module is the only part on your ship that must not run out of health or you’ll lose. As you fly through the level, you’ll receive warnings at specific points to let you know where enemies are coming from and what type.

You’ll need to place weapon modules on your ship to take them out. Killing enemies will drop resources that you can use to build more modules along your trip. Part of the challenge of the game is that weapon modules can only attack from certain radii and you’ll have to recycle modules that aren’t needed and place them where the new threats are coming from. 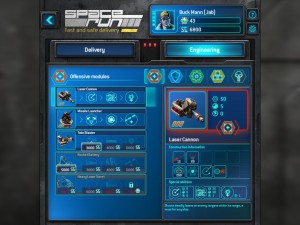 Unlocking new modules is vital for having any chance at getting the best scores on each map.

At the end of each mission you’ll be rewarded with reputation points based on how well you did and credits.

The reputation points are primarily a gating mechanic that locks new missions and modules while credits are used to unlock them. Not only are you graded on getting all the cargo to the end in one piece but also how fast you do it.

Thrusters can be attached only to the back of your ship and will increase your speed which only affects the time it takes to get to the end but does not affect enemy spawns.

This creates an interesting risk vs. reward system as you are budgeting your limited resources for speed where they could be used for added protection. Space Run is an original take on the tower defense genre but there are some issues that make this a bumpy ride.

The difficulty of Space Run is on the higher end of the scale which in of itself isn’t a bad thing, but UI and gameplay decisions are the culprit.

There is no way to pause the game while in play to make emergency repairs or buy modules and the UI is somewhat cumbersome. From what I could see there weren’t any hotkeys to quickly build, repair or recycle modules without having to go through the on screen UI. Given the lack of a pause feature makes this a confusing decision.

The graphics were clean but everything has a sameness to it which makes it hard to at a glance tell how your ship is doing or what’s what. I couldn’t tell which module were lasers and which ones were missile launchers for example. This is not good because not only does it make it hard to tell what your ship can handle, but it makes fighting larger ships a pain.

Boss fights and large ships are built the same way as yours with different modules attached. But you can’t really prepare a proper strategy if you can’t see what the enemy ship has on it.

The lack of a pause feature was purposeful by the designer but I have to disagree with this decision. When you are being attacked from all sides, it becomes next to impossible to manage and plan effectively. Because modules take time to heal and weapon attack ranges, one second could mean the difference between life and death for your modules. 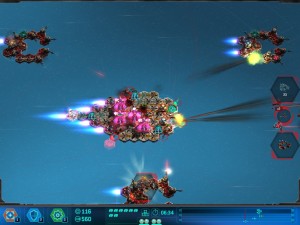 Being attacked from multiple angles is made extra difficult due to the lack of a pause feature.

Also when you’re dealing with larger ships, you’ll find that they tend to circle around your ship requiring you to remove and reorient modules to keep attacking.

Again this is something that is very micro intensive with the lack of a pause feature making things arbitrarily difficult.

Lastly, I’m not a fan of the progression model of locking parts behind the credit and reputation walls. As the enemies get stronger and more numerous, you are pretty much required to go up the power curve through the design and it just feels like the progression is not really about choice but simple busy work.

Space Run manages to do something new with the tower defense genre which in this day and age is not an easy task. And while it may not completely succeed at all fronts, it’s still an impressive first title from a new developer.

The Rise and Fall of Rise of Legends

Are There Standards of Game Design?