Star Vikings Review: Vikings for All

Star Vikings is an interesting game designed around not just unique game elements, but the accessibility that made Plants vs. Zombies famous. While the game may not hit the same notes as PvZ, it’s an enjoyable game that anyone can play.

The story of Star Vikings is about a group of space Vikings (duh) who are out partying, fighting and drinking, until they get pulled into a possible galaxy-ending event that only they can fix (because they caused it).

The game features mechanics from both puzzle and RPG designs. Each stage past the first set is randomly generated around a goal. Your mission is to move your Vikings forward to complete the objective before they are all killed.

The Vikings themselves come in different classes that affect how they level up and their base stats. You can also buy/find special Viking hats to enhance them further. The controls are simple: You can only move Vikings forward and you can click on them to perform special actions. 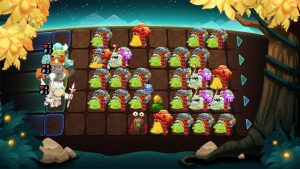 The puzzle solving is about how you deal with the enemies. Every enemy has a specific behavior based on if they’re attacked or the Vikings’ position.

Winning requires you to use your abilities to exploit their behaviors to kill them without losing your health. Energy, used for special abilities, recharges after every room; health does not.

While this may sound complicated, the developers have done their best to make Star Vikings easy for anyone to play.

Plants vs. Zombies was an amazing game due to its accessibility and skill curve. With Star Vikings, the UI and design were all built for someone brand new to play and understand.

Despite featuring unique gameplay, the developers have done a great job to explain this in an easy to follow way. Tool-tips are set up for everything in game, and the game was built around using a mouse (or touch on mobile).

One of the more interesting ideas is how the game handles upgrading through leveling in the game. The upgrades don’t add new abilities or systems for the player to use, but improve the ability of the Viking. Many of the upgrades are based on probability; allowing you to see their impact while playing, but not over complicating the gameplay. 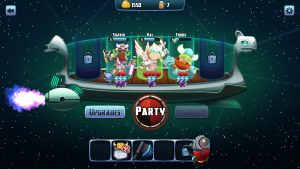 The skills, classes and design were all built around being accessible to non-gamers

To aid players, you can also pick up a variety of items that can restore health or energy, or perform special functions. Eventually the special hats will show up that can further specialize your Vikings.

All in all, Star Vikings is a great example of accessible UI design and unique gameplay. The only problem is that the difficulty may get in the way of being as accessible as Plants vs. Zombies.

As mentioned, the level layouts are randomly generated past the first area of the game. Because of that, the difficulty of the game can swing depending on luck of the draw. Similar to games like XCOM, the probability of certain actions can drastically impact whether or not your plan will work out.

Everything from enemy position and type, passives triggering, and even what items you find in chests can affect your chances.

This also becomes a factor when the grind begins to start. To continue making progress, you’ll need to acquire fuel at specific points. Getting fuel either comes down to playing challenge maps or getting lucky with chests and bonus quests.

The challenge maps require you to come prepared with leveled up Vikings (and hats when the time comes) to stand a chance. This means replaying maps you’ve already done for the experience and gold needed to power up your Vikings. I hate to say this, but this is where Star Vikings slips up on the Plants vs. Zombies accessibility.

Having progress stopped until you grind specific points for the needed resources sounds very similar to the F2P grind. And again, the probability and randomization makes this extra painful when an unlucky turn of events can make you lose a level; costing you all resources, items used and experience earned. This wouldn’t be so bad if this was just limited to the end/post-game, but we’re talking halfway through the second act that this begins.

You cannot respec Vikings; requiring you to spend gold to buy new Vikings of the same class. While this isn’t horrible at the end of the game, it can be frustrating during the early parts of the game.

If you can put up with some grinding, Star Vikings is an accessible game that you haven’t seen before. If the grinding can be reduced, this would be an easy game to recommend to gamers of all ages. At this point, this is a challenging game under the disguise of a casual one.

For more on the game, be sure to check out my Building the Game video on Star Vikings with lead designer Mark Venturelli.

Balancing the Depth of RPG Design with Zavix Tower