Thunder Lotus is a studio that knows how to impress from an aesthetics point of view. Their previous game Jotun was beautiful to look at, but did not wow in terms of gameplay. With Sundered, the developers go further in terms of game design with a metroidvania rogue-like mixed with Lovecraft. Unfortunately, questionable design decisions waste any good will that the game’s beautiful aesthetics earn.

A Long Way Down:

The story of the game follows a woman named Eshe who finds herself trapped in a long forgotten cavern. A mysterious voice guides her and tempts her with power if she can fight her way through hordes of enemies.

The gamespace itself is kind of pseudo procedurally generated. The areas themselves are all hard coded, but every time the player dies, the general paths through will be shuffled around, and trust me, you will die a lot.

The only places that are hard coded are important rooms, boss fights, and ability shrines. Hidden throughout the world are shrines that will unlock new abilities to use, and are the major aspect of the metroidvania gameplay.

Killing enemies and breaking objects will earn you shards that are used at the skill tree back at the start. Unlocking nodes will improve your base stats and can unlock special bonuses as well. Where the game gets interesting is with the pursuit of power, and the cost behind it.

Sundered’s lovecraftian themes come in with the pursuit of eldritch powers. Every boss you kill unlocks an elder shard; requiring three to complete a crystal. By taking a completed crystal back to one of the ability shrines, you can “corrupt” the shrine and augment one of your powers. The more you corrupt Eshe, the less human she’ll become and it will factor into the ending. It’s a great twist on the whole “good/evil” morality system. Corrupting shrines is the only way to access the full extent of your powers, but it will come back to haunt you at the end. 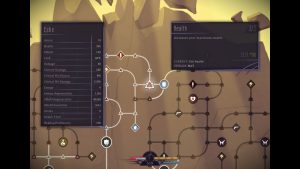 powering yourself up with shards is your only hope

Unfortunately, I have a feeling that a lot of players will not be reaching the end of Sundered due to some questionable design choices and difficulty spikes.

While Sundered looks and plays like a Metroidvania, there is a far greater focus on combat. Enemies spawn in the longer you are exploring, with the types dependent on what area you’re in. While you are free to attack as often as you want, defensive maneuvers will cost you energy. Taking too much damage will drop your shield, and will require you to avoid getting hit to recharge it.

While this is all well and good, the game throws in a mechanic known as “hordes.” At random points during your exploration, you will hear a gong, causing a wave of enemies to start attacking you from all directions. There is no way to prevent this from happening, and your only options are to kill them all or die trying.

To make matters worse, this is a game that’s all too happy to allow enemies to attack you from range off screen, or let melee enemies begin their attack off screen with no way for you to properly defend. The combat system is very floatly, thanks to the fact that you can attack and walk through character models. Several bosses and enemies would start their attack animation in one direction, and then immediately finish the attack facing the opposite direction.

Fighting flying enemies can be a nightmare of them able to just float into a wall and get free shots at you while you wait for them to get closer. One boss fight in particular near the end was a nightmare because of this. It seems like the enemies have no relation or care to the environment; leaving the player to deal with the constraints themselves.

There’s nothing deep or interesting about Sundered’s combat, and the way the game pushes you into it is very off-putting for the design. Most enemies don’t drop shards, and the ones that do don’t drop a lot. Since the ability shrines are your main form of progression, it can lead to many runs feeling wasted when you’re killed by a random horde. To add further insult to injury, shards don’t automatically come to you when they’re dropped, and you are required to keep stopping and waiting for them to be collected.

The difficulty spikes even more when you get to the game’s bosses; though beautiful to look at, are a pain to fight. The game assumes that you’re pumping your shards into your stats, but all the bosses feel like damage sponges that aren’t interesting to fight.

It’s not good combat to spend five minutes wailing on a boss who can kill you at any time if several hits connect. You do not get any invincibility frames when you’re attacked, and when that is combined with hordes of enemies and multiple attacks on screen, can lead to your death before you can even react. By the time I reached the end of the game, I just got tired of each boss getting some kind of annoying advantage to use against me.

But perhaps the worst punishment about dying in Sundered is that the game fails to capitalize on its rogue-like system.

Sundered tries to make each play of the game feel different thanks to the general path changing on each run, but it doesn’t work at all. The problem is that the enemies and events in the game are completely disconnected from the changing world. Since enemies spawn in over time, they’re not filling up the cavern or being active threats. The environment itself is boring to go through thanks to how agile the player is. 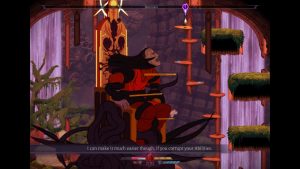 Once you get double jumping, your brain can go on auto pilot as you try to make some progress. What the game needs are more special events or room situations like in the Binding of Isaac — anything that breaks up the routine of doing the same thing over again.

Too much of Sundered is built on hard-coded elements. There is a fixed skill tree, fixed abilities to get, and fixed bosses. Having the world be “procedural” is more like a bullet point than it does an essential part of the gameplay.

The only element where the randomized factors matter is with what perks are dropped from fighting bosses and elites, but you’re still finding them in fixed situations.

The game feels like its being pulled between the hard-coded design of a metroidvania, while trying to have the replayability and randomness of a rogue-like.

While Sundered does feel more complete from a design point of view compared to Jotun, the gameplay doesn’t seem to come together in the same way we see from successful rogue-likes. The game already received a balance patch (and that’s the version I’m playing), and I’m really curious about how this game played at 1.0.

Even though it’s beautiful to look at, Sundered just can’t seem to fill its world with interesting challenges to do.