Sunless Sea has been in development over at Failbetter Games for awhile now, originally as a kickstarter to Early Access and was finally released a few months ago. This is the first game from the studio that tries to bridge their excellent writing and story crafting with gameplay beyond the textual design of their hit Fallen London. Unfortunately it doesn’t quite get there but we still have a very interesting title.

Sunless Sea takes place in the same universe as Fallen London which has to do with the city of London sinking into an undersea cave where lovecraftian horrors,magic and wonders await. In Fallen London, you played as a citizen of the city who was trying to make due and deal with the variety of characters that inhabited it. This time you are a captain whose job it is to explore the unterzee (yes I did spell that right) for various reasons.

Like in Fallen London, the mystique of the setting is in the writing and Sunless Sea is at its best here. Everything you do is recorded in your logbook and upon arriving at a new island or situation, you’ll be given a short narrative about the place. The Lovecraft influence is strong here with everything having that meticious detail to it that really paints a vivid picture of what’s going on.

When you start a new game, you’ll choose from several aspirations or stories that will make up your goal for that play — Will you try to recover your father’s bones that were lost at sea? Explore the unterzee? Become rich and more. In Fallen London, you were limited to text interactions within the city but here you’ll have a bit more control once you leave the docks.

Outside the docks of Fallen London there is the entire unterzee open to explore. You’ll control your ship’s direction and speed using your keyboard. While sailing, you have several important stats to keep track of that will help decide whether or not you’ll make it back alive.

Fuel and food are constantly ticking down and you’ll need to buy more using echos ( the game’s currency) before you are set adrift or have your crew starve to death or worse — cannialism. In emergencies you can increase the power of your engine causing the ship to go faster at the expense of fuel and the risk of your engine causing a fire. 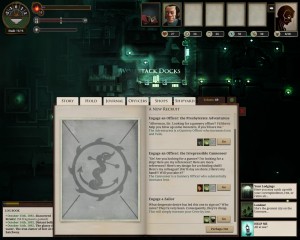 Your ship’s hull is your health out at sea and if your ship sinks your run is over, but the game is not and we’ll come back to that in a minute.

Lastly you have a terror rating that represents how you are mentally dealing with the horrors of the unterzee. Stay near the coasts or under the light of lighthouses and you’ll be fine, but wander off into the darkness will raise your terror up.

Finding new landmarks and places to explore can be done by using a trained bat that gives you general directions towards new areas and one of the main sources of income early on is exploring a new island and bringing a progress report back to Fallen London.

The combat system has evolved since the game went through early access and what was once a pseudo turn based mode now happens real time. The concept is that you need to keep your lights trained on whatever is attacking you long enough for your crew to get a clear shot. It’s an interesting mode but it can take awhile before you get access to a variety of weapons to make it engaging.

With so many crazy stories and situations going on, death is inevitable and the game starts in rogue-like mode where you die and your run is over. You can switch into a normal mode where death out at sea simply takes you back to Fallen London. The concept is that you’ll play until you die or complete the storyline, restart with bonuses from the previous play and begin anew while trying to explore everything there is in the unterzee.

As I said at the start, Sunless Sea is the most interactive title in terms of gameplay from Failbetter Games but the problem is that its two main areas of design are conflicting with each other instead of working together.

Sunless Sea tries to be two things — An amazingly written story set to this world where you want to explore simply to find out how what’s going on. And a rogue-like where you take the chance of dying on every voyage while building your crew and fleet up in this strange world. 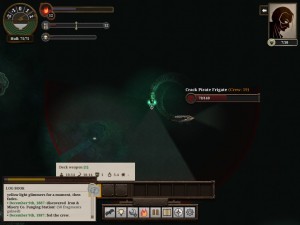 The combat system has changed over development and we’re left with a real time system that is okay but limited in its design and functionality.

The problem is that these two systems are completely opposed to each other in terms of how they work best. Story driven games normally take place in a linear environment so that the developers were able to hand place all the necessary story elements and themes.

Rogue-likes however thrive on randomization or even procedurally designed areas so that each play is different and keeps the player on their toes.

Sunless Sea was designed around the narrative first — With a world that is focused on the story and events at the expense of the rogue-like gameplay. Because the world is set each time, it means that death doesn’t change where you’ll go or how you’ll play and this creates a very predictable beginning. The only differences come in with what story you choose and what you decide at the various narratives out at sea, but that doesn’t directly translate to differing gameplay like starting ship, weapons etc.

Speaking of the start, Sunless Sea’s difficulty curve is very high at the beginning as you’re trying to figure out how to thrive and survive on the unterzee. The second you’ll leave port your resources will begin to dwindle and if you don’t make money quickly, you won’t be able to restock. There is a trading system in place where you can buy and sell goods around the unterzee, but the game doesn’t do a good job of explaining it and making it easy for player to quickly see the best deals and try to make a profit.

What that said, I’ve heard complaints from people who say that the difficulty curve quickly declines once you get out of the early game and buy an upgraded ship which again is not good. Too much of Sunless Sea’s focus and design is on the narrative with the rogue-like elements pushed aside. Unfortunately great rogue-like design requires it to be the focus and foundation of your title and here it just doesn’t work.

(Not so) Sea of Tranquility:

Sunless Sea is an interesting game and a bold direction from Failbetter Games and it works best playing the game for the narrative and world building. If the rogue-like elements and gameplay were more pronounced and better integrated, this could be an all around amazing title. One idea would have been to copied the format of King’s Bounty and have a set world but randomized all the inventory of the various shops to keep things somewhat different each time.

For what it is, Sunless Sea continues to expand on the Fallen London world, but I just wish that sailing around the unterzee was as interesting as meeting the locals.

Dungeon of the Endless: Operator