Failbetter Games is famously known for their amazing storytelling and narratives with their big hit Fallen London. Back in 2013, the developers wanted to expand their storytelling and game design with the kickstarter for Sunless Sea. With it, they combined their knack for storytelling with real-time design, and ended up with a polarizing game. Lessons learned, they’re trying it again with Sunless Skies, and they’re getting ever closer to that magic combination of storytelling and gameplay.

The Fallen London universe takes place in an alternate reality when the city of London sunk into a mysterious cavern miles below the surface. In this new place, mysticism, occult, steampunk, and lovecraftian elements began to appear. Sunless Seas was the first spin off — allowing gamers to explore the “unterzee” for treasure, power, and a lot of horror.

Now in Skies, players take to apparently an outer-space like environment still within the caverns. Using coal-powered flying locomotives (I’m not kidding on that one), you once again find yourself in a strange circumstance. You are the first mate on board a ship in the Reach — a no man’s land far away from London. With your captain dead, a mysterious box on board, and limited resources, it’s up to you to make a name for yourself.

As with London and Sea, Sunless Skies best part is the writing and storytelling. Every area is described in vivid detail, items have mysterious descriptions to them, and there are a variety of stories to find and be a part of.

Your options are all determined by what resources you have — physical, mental, and spiritual, and your core stats. As with their previous games, Skies features an attribute system with your abilities broken down into various categories. Different challenges can show up while doing a story and your chance for a successful outcome will be determined by the relevant stat.

As you earn experience, you’ll be able to improve your stats by expanding your back story, or hiring specialize crew members for your ship.

While all that is well and good, a big part of the Sunless formula is having a focus on gameplay and what you’re doing when you’re not reading a story.

Sunless Skies has a similar structure to Seas in the real-time gameplay department. When you start a brand new game, the game space is procedurally generated. Each one of the game’s four areas (at the moment) will have its space-ways created while filling them with points of interest (or POI). 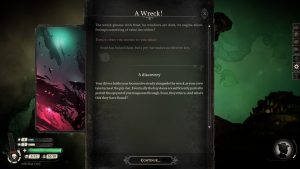 As with their previous games, the writing continues to be strong

While the stories at each POI are fixed, their location on the map will always be different when you start a new game from scratch. Most players aren’t going to do that too often, as the game has a loose persistence system.

If you die, you can create a new captain while retaining some of the money and resources you had in your last life. There is also the option to allow you to keep going with the same captain die.

Exploring space is entirely real-time, as you fly your locomotive around. At all times you need to manage your fuel, food, and terror. Finding crazy horrors and just being out in the wilds too long will raise your terror; if it gets too high you’ll go insane.

As you explore, you’ll come across enemies that you will have to fight. Controlling your space locomotive is easier than the ships in Seas, thanks to a new dodge mechanic.

While combat is a big part of the game, progress is all about acquiring new items and resources. Each port can have trading opportunities that will allow you to earn money by taking a specific number of items to another port. Early on, you’ll earn most of your money by completing port reports at each port, and taking them back to one of two faction centers.

Even though money will be spent on resources, you’ll soon want to save up for new gear to outfit your locomotive with, or simply buy a newer model with more space and possibilities.

Sunless Skies continues Failbetter’s evolution of their design, and while it does feel better than Sunless Sea, there are still some growing pains.

Sunless Sea often struggled with balancing the story-driven gameplay with the rogue-like elements. The beginning of the game was very rough for new players — with many mechanics and rules not explained. The second you leave port for the first time you are on a countdown to reach a point of stability. With rations and fuel expensive at the start, most players would fail very early.

This was compounded by the procedural nature of the maps. If you get unlucky with generation, you may not be able to reach (or find) the ports you need to start securing money. 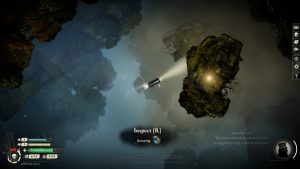 With Sunless Skies, being able to see trade opportunities along with the port reports makes things slightly easier. The game does make use of a lot of esoteric resources and services, and leaves it up to the player to figure them out.

However, the big problem that Skies has which continues from Sea is that the moment to moment gameplay just doesn’t have the same wow factor as the points of interest.

Each port is full of interesting stories, resources, and things to discover; with very little going on outside. During a play, I spent about 20 minutes exploring and nothing happened — no enemies, no resources, and no events.

The game needs more elements in the randomization — especially when it comes to resources. Sometimes you can find resource events that allow you to harvest goods to be sold, but the majority of them require an item or piece of gear that you won’t have at the start. Just having some basic events show up would help ease the slower pace at the start.

Sunless Skies is a step in the right direction for Failbetter, and I still want to see how things develop. If they continue to grow the gameplay and make it as interesting as their narratives they will have an amazing game. At this point, if Sea didn’t work for you, Skies is better, but the main problems still remain for me.

I don’t know where else Failbetter can go in the cavern, but I’ll be definitely keeping an eye on them.